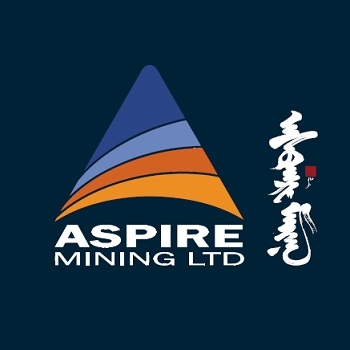 ASX:AKM) is pleased to provide the Company Annual Report to shareholders.

I am pleased to report to you on the activities of Aspire Mining Limited during the year under review.

Your Company successfully completed a significant milestone in its progress towards development of the Ovoot Coking Coal Project ("Ovoot Project") in northern Mongolia by the completion of the Ovoot Pre-Feasibility Study ("PFS"). One of the outstanding features of the PFS was the high level of Coal Reserves within the 4km long, 1.5km wide, 300m deep Ovoot Project open pit at 178Mt. The Ovoot Project is now capable of supporting a 15 year mine life supplying up to 12Mt per annum of high quality coking coal to the growing markets in Asia. The scale of the Ovoot Project is such that it is now regarded as the second largest coking coal project in Mongolia and at full production it would make Aspire one of the largest coking coal producers in the world.

The delivery of the positive PFS paved the way for the grant of the Ovoot Project Mining Licence which was issued in August 2012. It also set the stage for high level discussions with Mongolian government officials regarding permitting and environmental approvals. In addition, the PFS provided the basis for discussions with potential customers of Ovoot Project coking coal, infrastructure providers, partners and financiers. The PFS confirmed the robust economics of the Ovoot Project and outlined the strength of the strategy for the staged development of the project with the decision taken to promote the Ovoot railway as part of a special purpose vehicle to be financed as a third party infrastructure facility.

Infill Coal Reserve drilling at the Ovoot Project deposit and Coal Resource modelling for the PFS together with additional geophysics during the year has significantly enhanced the Company's understanding of the geology and prospectivity for additional coking coal deposits within the Company's 509km2 licence area over the Ovoot Basin.

The results of these efforts have confirmed the potential for the Ovoot Basin to host additional deposits of both open cut and underground coking coal deposits.

Importantly, Aspire demonstrated during the year that developing the Ovoot Project and Northern Rail Line would provide much needed economic and social benefits to the north of Mongolia. In fact, in addition to the several thousand jobs that the Ovoot Project mine and railway would create, it would also be the catalyst for transforming the opportunities for the mainly herding population of the Khuvsgul province by the benefits of establishing a new rail linked to the Trans Mongolian rail network at Erdenet.

Aspire is proud of the many projects that it has already contributed to in the Khuvsgul province including investment in hospitals, schools, education and training. In October 2012, Aspire will be present at the opening of a new 20 bed hospital in Tsetserleg, a joint venture between the Khuvsgul Provincial Government and Aspire.

The Mongolian general elections are held every four years and were successfully conducted in June 2012. Mongolia is leading the way as an emerging Asian democracy and the high level of political debate leading up to the general elections is evidence of a healthy process. The elections resulted in the formation of a coalition government and the appointment of Norovyn Altankhuyag as Prime Minister. Your Company is working closely with its advisors in Mongolia and the new government representatives to promote the social, economic and strategic benefits of the Ovoot Project mine and Northern Rail Line project.

We are confident that the Mongolian government will continue to encourage foreign investment in Mongolia and that the mining sector will continue to play a large role in promoting growth within Mongolia. I am pleased to say that Mongolia achieved 17.3% GDP growth in 2011 mainly as a result of the continuing development of the Mongolian mining industry and the investment by Rio Tinto in the massive Turqouise Hill copper mine in the Gobi region of southern Mongolia.

During the year Aspire added to its team of senior Mongolian and international executives in Ulaanbaatar with the appointment of senior project director, James Benson to lead the Company in Mongolia. I would like to take this opportunity to thank Managing Director David Paull and the management team for their efforts and leadership during the year. I would also like to take this opportunity to thank my fellow directors for their contributions. Finally, I would like to thank Gan-Ochir Zunduisuren for his guidance and advice as a non executive director in Mongolia over the past three years and to welcome Sado Demchingsuren Turbat to the board of Aspire Mining Limited.

With the growing high quality Ovoot Project I believe that Aspire is well positioned to grow shareholder wealth as additional permits are obtained, funding is secured and the Company moves closer to realising the substantial in ground value for the Ovoot Project.

In this way our Australian, Mongolian and international shareholders will be rewarded for their ongoing support.

View the complete Aspire Mining Annual Report 2012 at the link below:
http://media.abnnewswire.net/media/en/docs/ASX-AKM-605824.pdf

Aspire Mining Limited (ASX:AKM) owns 100% of the Ovoot Coking Coal Project in northern Mongolia. Aspire completed a Pre-Feasibility Study for the Ovoot Project in May 2012, targeting a large scale open pit mining operation, with production of 10-12 Mtpa of saleable coking coal at full capacity. Aspire is targeting first production at Ovoot in early 2016 subject to approvals and licenses. Ovoot ranks as the second largest coking coal Reserve, by project in Mongolia, with a JORC Code compliant Coal Resource at Ovoot of 252 Mt (156 Mt Measured, 70 Mt Indicated, 26 Mt Inferred) and Probable Coal Reserves of 178 Mt. Aspire is continuing to progress its application for a mining license, and access to rail infrastructure and other regulatory approvals. 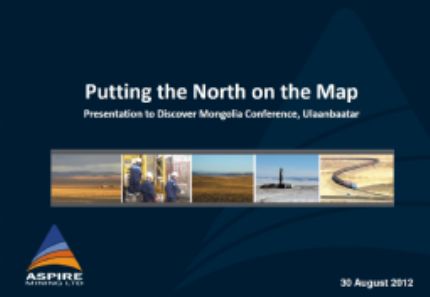