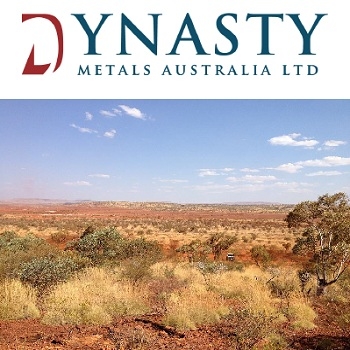 It is with great pleasure that I present to you the 2012 Annual Report for Dynasty Metals Australia Limited.

Your board is committed to continuing to grow the company's iron ore resources by exploring the new exploration targets and conducting further beneficiation study on the billion tonne Spearhole project.

2013 is to be an exciting year for Dynasty as we look to develop the opportunities presented by both infrastructure development, joint venture agreements your company has with other companies that should see some benefits flowing to Dynasty throughout the year, and also the development of new projects into economically viable assets.

At the 2011 AGM, shareholders voted on a number of changes to the company's board. Since then, the board has worked together to strengthen the company's governance framework, which has been assisted by the appointment of a new company secretary.

Dynasty entered into a joint venture agreement with China Coal Geological Engineering Corporation (CCGEC) in relation to its non-core tenements held by Goldstone Resources Pty Ltd (Goldstone). CCGEC contributed $2 million to Goldstone to be used to fund further exploration of these tenements. CCGEC and its associate received a 60% interest in Goldstone, and Dynasty retains the balance. To date there has been extensive geophysical surveying completed by Fugro to provide drilling targets.

Dynasty's agreement with Atlas Iron Limited in relation to the North Shaw Project E52/2728 (now part of Atlas' Abydos Project), entered into in June 2006 provides Dynasty with a 2% royalty payment from iron ore produced from that tenement. This project has been slated by Atlas for production in April 2013 and we have made approaches to Atlas seeking further information regarding the project and the timelines. This agreement only extends to Atlas the iron ore rights and not other minerals.

ASX:TCM), in exchange for 3 million shares in TCM, subject to 12 month escrow. Dynasty was of the view that it was better served by this strategy of allocating the funds towards exploration of its core tenements than to continue to participate in funding the joint venture. Dynasty remains optimistic of the success of the Tiaro project and welcomes the opportunity that this sale transaction provides to continue to participate in the upside potential whilst providing liquidity after the expiration of the 12 month escrow period.

During the course of the year your company secured two strategic and prospective tenements which added to the current iron ore portfolio. E52/2591 has been granted and is located near BHP's Mt Newman operation. The 20.5 km2 area is highly prospective for DSO targets. The second tenement, E47/2396, is subject to the execution of a heritage agreement with the native title group. The project is located 8kms North-West of Rio Tinto's Marandoo mine. The regional magnetics, for this tenement show anomalies consistent with Marra Mamba Formation under cover.

Queensland Rail Limited (QRN) recently announced its intention to build an independent rail network in the Pilbara region. QRN is in discussions with Atlas Iron and Wah Nam (previously Brockman Resources) as foundation customers and is hoping to provide rail infrastructure to other companies in the Pilbara region. The proposed rail corridor is less than 75kms from Dynasty's Spearhole in Prairie Downs. Dynasty continues to follow the progress of QRN and looks forward to further developments of this exciting infrastructure project.

Your board holds the view that the recent fall in the iron ore spot price may be a short term correction. The board remains confident with the flagship billion tonne Prairie Downs Project, and aims to achieve more exploration success over the DSO target zones to complement the current resources. In addition, your board has been constantly evaluating various other mineral opportunities to enhance the returns to shareholders.
I take this opportunity to thank our directors for their efforts throughout the year. I also would like to thank the shareholders for their continued support and together with my fellow directors I look forward to taking on another challenging but rewarding year ahead.

View the complete Dynasty Metals Australia Annual Report at the link below:
http://media.abnnewswire.net/media/en/docs/ASX-DMA-606173.pdf