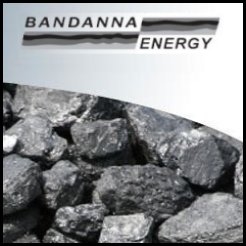 PINK:BANAF) today announced that it had submitted a Mining Lease Application for its Springsure Creek project south east of Emerald in central Queensland.

The application, MLA 70486, by Springsure Creek Coal Pty Ltd was developed following consultation with community members, the Central Highlands Regional Council and the Queensland Government, and provides for underground coal mining activities over parts of EPC 891.

Following these consultations, the boundary of MLA 70486 and the layout and design of the proposed revised mine plan for the Springsure Creek Project have been adjusted to minimise impacts and to improve beneficial co-existence of underground coal mining and the operation of agricultural farms and homesteads.

Managing Director Mr Michael Gray observed that "the Springsure Creek Project is the only large scale, greenfield thermal coal project in Australia that has contracted port and rail capacity through facilities under construction. Despite challenging conditions in current coal markets, Bandanna is well placed, with a strong cash position and ongoing discussions with project partners, to enable the project to be developed and commence production in a period when forecasters predict significant further demand for thermal coal. Whilst existing coal producers are scaling back current operations, Bandanna remains focused on progressing development of the Springsure Creek Project to take advantage of anticipated improved market conditions from 2015 and beyond."

Mr Michael Gray said, "We are strongly committed to the co-existence of farming and underground mining at Springsure Creek and look forward to working with landholders, the community and all levels of government to demonstrate how the Springsure Creek Project can deliver benefits to the local and wider community through coal mining and agriculture."

"We have already committed investment to increase agricultural production at Bandanna's current freehold property at Denlo Park through improved irrigation infrastructure. We are in the process of developing an agriculture strategy, with respected agricultural science input, to further improve surface level agriculture production. This is as an important element of our demonstration of how Bandanna Energy does business in the communities in which it operates and provides a model for co-existence between the two great Australian industries of Agriculture and Resource Development in Queensland's and Australia's interest."

Following submission of MLA 70486, Springsure Creek Coal Pty Ltd is on schedule to further progress discussions with potential joint venturers and debt financiers for the project during the December quarter.

All design work on the Definitive Feasibility Study (DFS) for the project was completed on schedule in September 2012 and that DFS is now the subject of an independent technical review. The outcomes of the DFS form the key technical and commercial basis of discussions with potential project debt and equity stakeholders.

Following finalisation of the DFS, Springsure Creek Coal Pty Ltd will also be in a position to release for public review the Draft EIS for the Springsure Creek Project by the end of the year. The mining lease application process will progress in parallel with the EIS process.

Mr Gray noted the lodgement of the MLA as another significant milestone towards the development of the project. "The finalisation of the DFS, submission of MLA 70486 and the progress of the Draft EIS demonstrate Bandanna's ongoing progress towards development of the project to produce first coal exports in the second half of 2014 to coincide with the forecast completion of Stage 1 of the Wiggins Island Coal Export Terminal (WICET)."