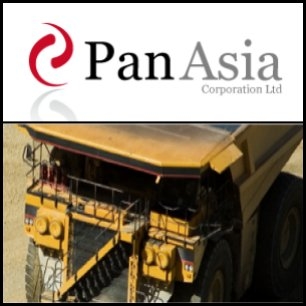 ASX:PZC) are pleased to provide the December 2012 Quarterly Activities Report.

CEO Alan Hopkins said "This was a very strong quarter for us as we significantly increased the size of our project, stabilised our finances and brought in very experienced coal expertise."

During the quarter, the Company announced a further JORC upgrade of its JORC resource to 177 million tonnes (measured, indicated & inferred) and importantly an increase to 129 million tonnes on the mineable seams.

As the project moves to detailed development planning in 2013, the Company successfully appointed Mr. Mitch Jakeman as a Non-Executive Director of Pan Asia. Mitch has worked in the Australian coal mining industry for over 35 years, the majority of which was spent with major global coal resources companies BHP, Shell Coal, Rio Tinto and Anglo Coal Australia.

Pan Asia Chairman Domenic Martino noted that "The appointment of Mitch to the board as our project nears development phase, adds important technical capability. This will help us deliver the low cost, high calorific value TCM project in a manner that makes best use of shareholder capital and delivers a clear value proposition to potential off-take partners and investors at the project level. Put simply, Mitch has a technical and operational track record of delivering results. Mitch's knowledge and experience will be invaluable to Alan and the existing Pan Asia management team in leveraging the significant work they have done to date."

Mitch spent a significant part of his career managing large underground and open-cut coal mining operations and had until 2010 held the position of Head of Operations for Anglo Coal Australia where he was responsible for over 40Mtpa of thermal and coking coal production for domestic and export markets in Queensland and NSW. Since leaving Anglo Coal, Mitch has provided strategic and risk management advice to a number of private and listed companies in the resource and financial services sectors and was previously the Managing Director of Carabella Resources Limited from its initial public offering through to August 2011.

In addition to this, Mitch has served on a number of industry and government groups, which have included:

- Board member of the Sustainable Minerals Institute based at University of Queensland;

- Member of the Mining Council of Australia for committees on Safety and Health and Environment and Sustainable Development;

In December 2012 the Company successfully rescheduled (rolling over interest free for one year) the loan arrangments with Kopex entered into by PT Transcoal Minergy (TCM), the 75% owned Pan Asia subsidiary.

The parties have agreed to extend the loan repayable to Kopex of US $2,530,000 ("Outstanding Amount") to 30 November 2013. Kopex can elect to have the Outstanding Amount converted to new issued ordinary shares in Pan Asia anytime between 1 October 2013 and 30 November 2013 at the average closing price for the shares in the immediate 20 trading days prior to electing to convert the outstanding amount to equity. Kopex will retain their pre-emptive right to participate in the development and production of the TCM project which includes the provision of mining services, mining equipment and financing of development and production until the loan is repaid. TCM have also retained the competent person of Kopex, Marek Rosa, to consult to TCM and the Company on the TCM Project for the 2013 calander year.

In December 2012, the Company completed a capital raising for $560k to sophisticated investors who subscribed for 8 million shares at $0.07 per share to raise gross proceeds of $560,000 ("Placement") under the Company's 15% capacity as per the ASX Listing Rules. The new shares rank equally with existing fully paid ordinary shares. Of the 8 million new shares subscribed for, 1.8 million shares were subscribed for by new Non-Executive Director, Mitch Jakeman. The issue of these shares will be conditional on shareholders approving the issue of shares to Mr. Jakeman at a general meeting of shareholders in 2013. The funds raised are being used to enable the Company to accelerate its TCM studies and meet its short term working capital commitments.

The Company is nearing completion of receiving the outstanding funds from Ranrich as previously advised with US $240,000 to be received in the coming quarter.

The Company is preparing detailed plans to undertake all remaining items required before the project can be brought to development by the end of 2013. In parallel with this process, the Company is progressing arrangements to establish the necessary funding to bring the project on stream.

View the complete Pan Asia Corporation quarterly report at the link below:
http://media.abnnewswire.net/media/en/docs/ASX-PZC-623136.pdf