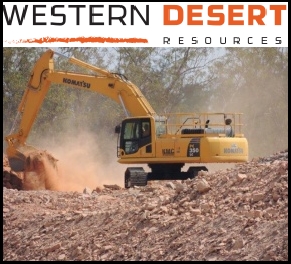 - Successful transition to new Barging Operator from 15 June 2014 results in a 50% improvement in shipping volumes in the second half of June 2014, with WDR's targeted run rate of 10,000 tonnes per day being achieved during discharge to final vessel of the month;

- Deployment of additional tug to site on 3 July 2014, which will complement existing fleet and provide an additional uplift in capacity; and

- Positive resource updates for Area F and Area E reported, to be followed by a Reserve Statement in July 2014.

- WDR Board appoints Ord Minnett and Somerley International Limited as Advisors to perform a strategic review of the Project with a focus on identifying and securing a strategic partner to develop Stage 2 of the Roper Bar Project;

WDR's "Pit to Port" logistics chain continued to ramp-up during the month of June following a significant upscaling of operations in May.

This resulted in 235kt of Direct Shipping Ore (DSO) being mined, 251kt of DSO being crushed and 178kt of DSO being hauled to the Bing Bong Loading Facility. Most notably, the transition to WDR's new Barging Operator from 15 June 2014 resulted in a significant improvement in shipping volumes, with WDR achieving its targeted rate of 10,000 tonnes per day during the final week of operations in June and achieving a record load-out cycle time of 5 days for a 55,000 tonne vessel.

Following a poor start to the month, WDR managed to tranship 170kt for the month of June and expects the significant improvement in its transhipping operations to continue following deployment of a second fit for purpose tug to site on 3 July.

The ramp-up of WDR's "Pit to Port" logistics chain has resulted in stockpiles of approximately 70kt pre crusher, 90kt post crusher and 140kt of crushed DSO product accumulating at the Bing Bong Loading Facility (BBLF) ready to be exported.

Mining (see chart in link below)

- Improved performance commensurate with drier conditions and quality of feed; &

- Hauling operations scaled back for the month given significant stockpiles at BBLF ready for transhipping; &

Transhipping (see chart in link below)

- Further tug arrived to site on 3 July 2014 and expected to provide an additional uplift in capacity.

Note: Tonnages reported are on a wet metric tonne basis and based on internal production data which has not been reconciled to end of month (EOM) Survey Data.

Notwithstanding the Company's present focus on ramping up Roper Bar's DSO production and optimising the project's logistics chain, WDR continues to explore options for "Stage 2" beneficiation and transport of low grade material which occurs in vast quantities throughout the Sherwin Iron Formation on the 100%-owned exploration and mining leases.

Stage 2 of the Roper Bar Project contemplates beneficiation of low grade mineralisation already defined throughout the project, including low grade stockpiles already delivered to the ROM pad as a by-product of the DSO operation. Stage 2 offers the potential for an expanded operation with increased annual production, low operating costs and long mine life.

In order to progress Stage 2 of the Project the WDR Board has appointed Ord Minnett and Somerley International Limited as advisors to perform a strategic review of the Project. The core focus is on identifying and securing a strategic partner to develop Stage 2 of the Roper Bar Project and maximising the considerable shareholder returns expected to be generated through the processing and monetisation of free issue low grade material generated from the DSO mining project, together with beneficiation of significant additional low grade material which occurs in vast quantities throughout WDR's 100% owned mining leases.

To view all charts and the release, please visit:
http://media.abnnewswire.net/media/en/docs/77553-ASX-WDR-805392.pdf

Western Desert Resources Ltd (ASX:WDR) is an iron ore mining company based in the Northern Territory.

It operates the 100% owned Roper Bar Iron Ore Project, located in the Gulf Country of the Northern territory. Development of this project has been carried out over the last 5 years, with export commencing in December 2013.

Western Desert Resources aims to be the leading low-cost iron ore producer in Northern Australia while generating wealth and prosperity for the people of the Roper Region and other regions where we operate. 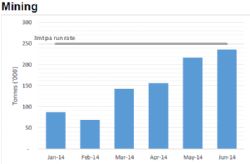 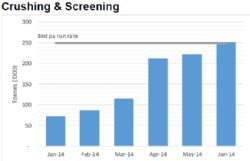 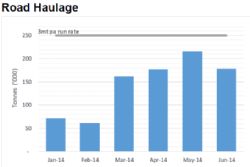 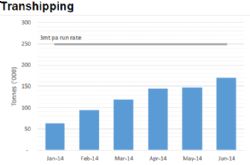