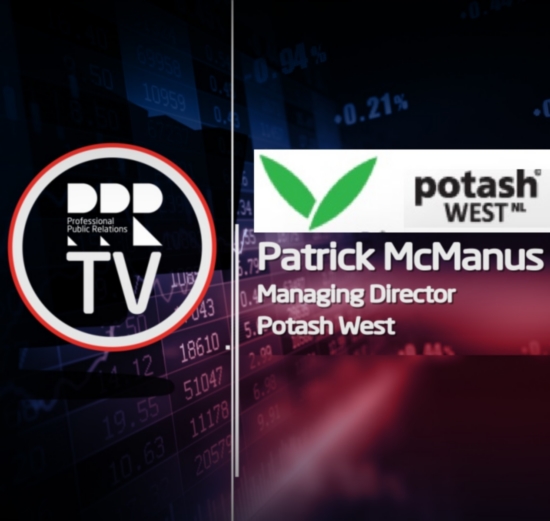 Video: MD Patrick McManus On Targeting Fertilizer Riches in Germany
Perth, Aug 12, 2014 AEST (ABN Newswire) - With the world's population increasing quickly and arable land reducing, forecasters are voicing a growing global concern over potential food supply shortages, particularly in developing countries. One of the least expensive and easiest ways to improve productivity of farmland is the use of fertiliser products like potash and phosphate.

OTCMKTS:PWNNY), which has already established a world class opportunity to supply a rapidly growing fertiliser market with superphosphate and potash from its Dandaragan Trough Project in Western Australia, is now taking its expertise into one of the most historic potash producing areas of the world in Germany.

Potash West has reached an agreement to earn into two exploration license applications in an established potash producing area in South Harz in the Thuringia district, in central Germany. The agreement will allow Potash West to earn up to 55% of the two exploration areas by funding the completion of the licensing process, undertaking geological studies of the wealth of historic exploration data associated with the area and supporting early exploration work. According to Potash West Managing Director, Patrick McManus, the new German project provides a perfect balance to the company's Western Australian activities.

"We believe Germany is a great place to do business, particularly in the potash and fertiliser space. It is perfectly located to supply its own large agricultural markets and those of its neighbouring European countries," Mr McManus said. "The world class German transport and logistics network also makes it easy to send end product to virtually anywhere in the world."

Potash West's philosophy is to focus on quality assets which are located close to end users with good transport and infrastructure. We have achieved that with our Dandaragan Trough Project in Western Australia and our projects in Germany match that to a tee.

"Germany's position as one of the world's leading global producers of potash fertilisers also brings with it the benefit of having a wealth of local expertise in potash mining available, our consultants Ercosplan have decades of experience in this region, and other potash deposits throughout the world."

The South Harz region of German where we are focused has a particularly strong history of potash production, dating back to 1896. "The two areas under application, Kuellstedt (246 sq km) and Graefentonna (216 sq km) have detailed records of extensive historical drilling that intersected potash mineralisation between 200 m and 1000 m below the surface," Mr. McManus said.

Both areas are also adjacent to properties that have had significant potash production over the last 100 years. "It really is a very exciting opportunity to add to the successes we have had in Western Australia and to develop a quality resource in a prime location close to infrastructure and end users," Mr McManus said.

Potash West (ASX:PWN) (OTCMKTS:PWNNY) is an exploration company focused on developing potassium-rich glauconite deposits in West Australia's Perth Basin. The Company aims to define a substantial resource base and investigate how best to recover potash from the mineral. The project is well situated in relation to infrastructure, with close access to rail, power and gas. A successful commercial outcome will allow the Company to become a major contributor to the potash and phosphate markets at a time of heightened regional demand.