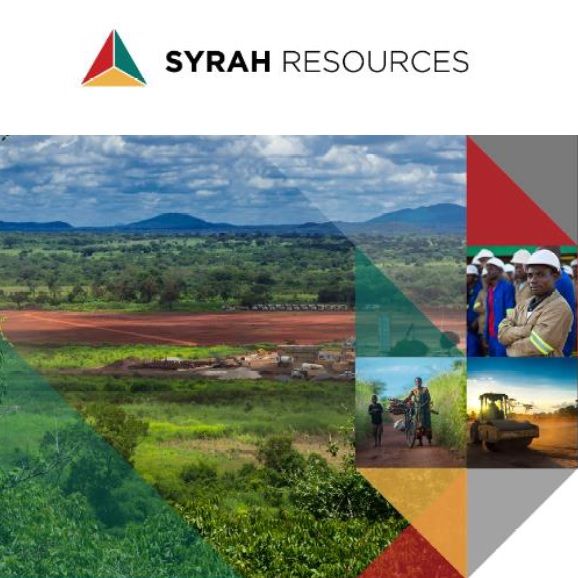 OTCMKTS:SYAAF) (Syrah or the Company) is pleased to announce that the Company has signed a Spherical Graphite Offtake Agreement with Marubeni Corporation (Marubeni) (

- Five year Offtake Agreement signed with Marubeni Corporation (Marubeni) to purchase a total of 50,000 tonnes of coated and uncoated spherical graphite per annum for major battery and anode customers in Japan and Korea

- Extensive test work on Balama spherical graphite samples have shown that it is superior to current material supplied from China, exceeding customers' expectations to date

- Further significant opportunities remain available in the Chinese, North American and European markets; Syrah has significantly progressed product qualification with these potential customers and will update the market shortly

The Offtake Agreement is for a duration of five years and Marubeni will have the exclusive right to import and sell Balama coated and uncoated spherical graphite (Product) in Japan and Korea (Territory). Marubeni will also have the exclusive right to sell Product to a subsidiary of a Japanese or Korean headquartered corporation (excluding certain specifically agreed customers), located outside of the Territory.

Marubeni will purchase a total of 50,000 tonnes of Product per annum and will market the Product to its customers, which consists of the largest battery and anode producers in the Territory. Marubeni's obligation to purchase commences after Syrah issues a notice that it has adequate commercial production rates of the Product so as it can supply Marubeni, provided that such notice must be given by 31 December 2019. Product prices will be negotiated on a quarterly basis between the parties with reference to the market prices prevailing in the Territory.

Syrah has completed an Internal Economic Assessment on a Proposed Spherical Graphite Facility in the United States. To underpin this growing interest by major lithium ion battery manufacturers, Syrah is currently developing a plan for the implementation of its spherical graphite strategy will updated the market once finalised.

Marubeni General Manager, Inorganic Mineral Resources Sec., Specialty Chemicals Dept., Mr. Ryoichi Mano commented: "We are very pleased to be able to conclude another Offtake Agreement with Syrah, this time for spherical graphite. Marubeni has worked closely with Syrah to conduct pre-marketing activities in Japan and Korea for nearly 18 months. Extensive test work have been performed on numerous samples provided by the Company, and results have shown that Balama spherical graphite is superior to current material supplied from China, exceeding customers' expectations.

We has also conducted due diligence on the Balama deposit and Syrah's pilot spherical graphite plant. Initial annual volumes of 50,000 tonnes is satisfactory at this time. However, we expect the Japanese and Korean markets to expand significantly in the near term. We see Syrah playing a key role as the major supplier as the market grows."

Syrah Managing Director, Mr. Tolga Kumova commented: "This agreement with Marubeni represents the largest Spherical Graphite Offtake Agreement that has been signed globally to date. Given that this volume is only for the Japanese and Korean markets, further large opportunities remain available in the Chinese, North American and European markets. Syrah has significantly progressed product qualification with potential customers in such regions and anticipates being able to update the market on developments in such regions before long. The Marubeni agreement has validated our strategy and steadfast belief that the lithium ion battery market will be the major source of growth for the graphite sector in the upcoming years. Syrah is ideally positioned to be a consistent, high quality and long-term major producer to satisfy the expected significant global demand for spherical graphite."

Syrah Resources (ASX:SYR) is an Australian resource company that is rapidly progressing its flagship Balama Graphite and Vanadium Project in Mozambique to production. The Project hosts the largest graphite ore reserves in the world with an Australasian Joint Ore Reserves Committee (JORC) compliant Ore Reserve of 81.4 Mt at 16.2% total graphitic carbon. Balama is a 110 km2 granted Mining Concession located within the Cabo Delgado province in the district of Namuno in northern Mozambique. The Project is approximately 260 km by road west of Pemba and is accessible by a sealed, main road, running directly from Pemba Airport. The Port of Nacala is approximately 490 km by road south east of the Project and is the deepest port in Southern Africa.