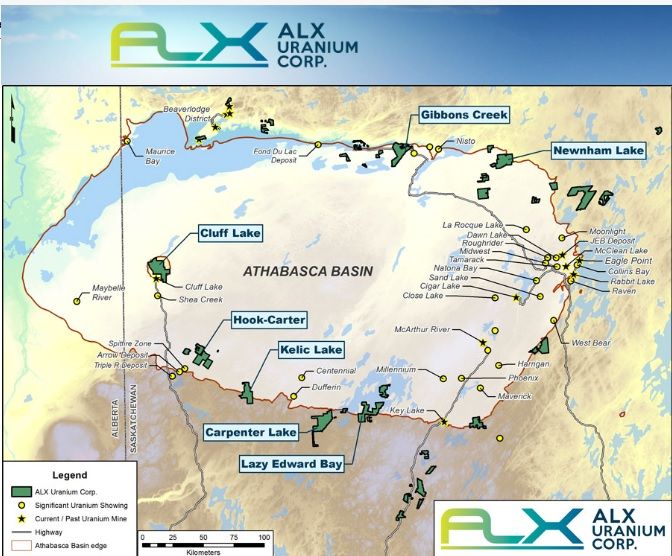 OTCMKTS:ALXEF) is pleased to announce that it has entered into a purchase and sale agreement with Miramont Capital Corp., a private British Columbia company ("Miramont") for Miramont to acquire a 100% undivided interest in the Midas Gold Property (the "Property"), located in the Sault Ste. Marie Mining Division of north-central Ontario. The sale includes ten mining claims encompassing 108 claim units (1,728 hectares or 4,270 acres) located in the Michipicoten Greenstone Belt near Wawa, Ontario.

Under the terms of the agreement, Miramont Capital Corp. can earn an undivided 100% interest in the Property by making cash payments and share issuances to ALX Uranium Corp., as follows:

Sporadic exploration has been carried out in the Midas Gold Property area, beginning in the 1940s, with most work completed in the late 1970s to 1990. Past exploration has included surface sampling, trenching and airborne and ground geophysics as well as diamond drilling.

During the winter of 2011, ALX (formerly Lakeland Resources Inc.) carried out a geophysical program consisting of ground magnetics and induced polarization (IP) in the southwestern area of the Property. A total of 16 diamond drill holes comprising 2,353 metres were completed to follow up this geophysical program. The drilling was designed to test induced polarization anomalies and surface gold showings. Drilling partially defined two gold-bearing zones (Zones GZ-1 and GZ-2) with 14 of the holes reporting gold mineralization. Highlights of the drilling are summarized below.


The drilling identified a broad gold-bearing structure, which can be traced for over 500 metres in strike length. Work indicated that the gold system lies along the southern limb of a broad anticlinal fold structure and is associated with widespread silicification and carbonatization.

A follow-up diamond drill program consisting of 11 holes totalling 1,488 metres was completed in 2013. The 2013 drill program was designed to test the along-strike and downdip extensions of gold mineralization encountered in the previous drilling. Drill holes were also positioned to better define structural corridors that are key to mineral distribution. Nine of 11 holes intersected pyritized east-west trending shear zones previously known as GZ-1 and GZ-2. Highlights of the drilling are summarized below.


The 2013 drilling confirmed and further defined gold mineralization that was previously identified in the 2011 drill program. Mineralization appears to be associated with quartz stockwork veining within the shears. The GZ-1 and GZ-2 shear zones both trend east-west with shallow southward dips. The strongly pyritized shear zones are hosted in mafic to intermediate metavolcanics. The zones are subparallel and positioned approximately 200 metres apart.

About the Midas Gold Property

The Midas Gold Property consists of ten (10) staked mining claims encompassing 108 claim units (1,728 hectares or 4,270 acres) located in the Michipicoten Greenstone Belt approximately 50 km northeast of the town of Wawa, Ontario. The Property is road accessible and lies within 20 km to the southeast of the Island Gold Mine of Richmont Mines Inc. and the Magino Gold Project of Argonaut Gold Inc. The Property is subject to an underlying 2% NSR in favor of the original property vendors.

Technical information in this news release has been reviewed and/or prepared by Sierd Eriks, P.Geo., VP Exploration who is a Qualified Person, in accordance with the Canadian regulatory requirements set out in National Instrument 43-101.

ALX Uranium Corp. was formed as the result of a business combination between Lakeland Resources Inc. and Alpha Exploration Inc. ALX is based in Vancouver and its common shares are listed on the TSX Venture Exchange under the symbol "AL", on the Frankfurt Stock Exchange under the symbol '6LLN' and in the United States OTCQX under the symbol 'ALXEF'. ALX is actively exploring a portfolio of early-stage properties. ALX continually and proactively reviews opportunities for new properties, whether by staking, joint venture or acquisition.