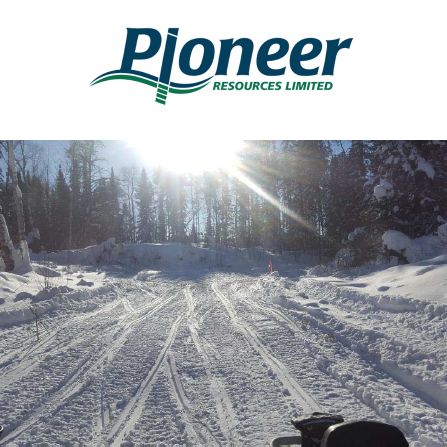 OTCMKTS:PIONF), in conjunction with its strategic partner International Lithium Corp. (

CVE:ILC), is pleased to announce the lithium analytical results from its recently completed maiden drill programme at the Mavis Lake Lithium Project in the province of Ontario, Canada.

The programme comprised 12 oriented diamond core drill holes for a total of 1,305m across three targets (see Figure 4 in the link below), and was successful in intersecting multiple high-grade pegmatite lenses at the Fairservice (PEG006) Target Area - which remain open in all directions, and will be a focus for drilling going forward.

A programme of step-out drilling to further test these well spodumene-mineralised pegmatite lenses is being planned ahead of the summer drilling season.

Drilling commenced on February 4 and was completed on March 2, 2017. The programme by target comprised:

The 2017 drilling has confirmed the presence of multiple, well mineralised spodumene-bearing pegmatite lenses. The four step-out holes completed were designed to test the orientation of mineralisation intersected in MF-11-12. All four holes intersected spodumene-bearing pegmatites of significant thickness, with evident continuity with mineralisation in drill holes MF-11-12 and MF-12-24 from the 2011 and 2012 ILC drilling programmes. (Refer to Figures 1 and 5 in the link below).

To date, the drilling in the Fairservice (PEG006) target area has drill tested a horizontal strike length of approximately 60m and down dip to a maximum depth of 145m below surface. At the cessation of this phase of drilling the mineralised pegmatites remain open in all directions.

In addition to encouraging pegmatite intersections and laboratory results, geologists also observed an intense lithium alteration halo of up to 1.2% Li2O within the mafic volcanic host rock adjacent to the pegmatite intersections. The extent and pervasiveness of the lithium geochemical dispersion surrounding the pegmatite bodies bodes well for a robust mineralising system with significant size potential to be present.

Seven holes were drilled to test the lateral and down-dip extent of Pegmatite 18, which is a shallow, southwesterly dipping pegmatite that has been traced in outcrop for 215m on surface.

All seven drill holes intersected Pegmatite 18 with the intersections varying in visually estimated spodumene content as between 5 and 45% with pegmatite thickness between 1.5m and 9.85m. The thickest intersection, at 9.85m, is present in the southern-most drill hole, which is located 115 metres down dip from the Pegmatite 18 outcrop and 46m vertically below surface.

Pegmatite 18 remains open to the East, West and at depth.

The laboratory work was conducted by Activation Laboratories Ltd of Ancaster, Ontario with samples submitted by the Company's consultants to preparation facilities in Dryden, Ontario. Activation Laboratories Ltd is an ISO 17025:2005 and CAN-P-1579 certified laboratory. Analysis was performed using a Na-peroxide fusion digestions followed by an ICP-OES and ICP-MS finish.

Following the receipt of these very positive assay results and with regard to the highly encouraging thicknesses of the pegmatites intersected, the Company has commenced preparations for further drilling at the Mavis Lake Prospect. This includes modelling the pegmatites for continuity and orientation, further mapping of litho-geochemical anomalies and other areas where the pegmatites are projected to approach the surface, and field checking to establish new drill sites at the Fairservice Prospect. The next phase of drilling is anticipated to commence in the summer field season, when access tracks are dry.

ABOUT THE MAVIS LAKE LITHIUM PROJECT

The Mavis Lake Project is situated 19 kilometres east of the town of Dryden, Ontario (see Figure 1 in the link below: Project Location Map). The Project is ideally situated in close vicinity to the Trans-Canada highway and railway major transportation arteries linking larger cities such as Thunder Bay, Ontario, to the southeast and Winnipeg, Manitoba, to the west. The Raleigh Project is situated 61 kilometres southeast of the Mavis Lake Project.

The current drill programme is being wholly funded by Pioneer as part of its earn-in on the Project (see ASX release dated 15 March, 2016).

A $1 million budget has been allocated across the Mavis and Raleigh lithium pegmatite projects, which includes a planned total of 3,000m of diamond core drilling (inclusive of the drilling reported herein) split between the projects (See ASX release dated 26 July, 2016).

International Lithium Corp. is an exploration company with lithium projects in South America and Ireland in addition to the Mavis and Raleigh Projects the subject of this announcement. ILC also has strong management ownership, robust financial support and a strategic partner and keystone investor Ganfeng Lithium Co. Ltd. (

SHE:002460), a leading China based lithium product manufacturer.

With the increasing demand for high tech rechargeable batteries used in vehicle propulsion technologies, energy stabilisation systems and portable electronics, lithium is paramount to tomorrow's "green-tech", sustainable economy. Pioneer and ILC believe that by judicious positioning with high quality projects at an early stage of exploration, the Companies aim to be resource explorers of choice for investors in green tech and build value their respective shareholders.

Pioneer Resources Ltd (ASX:PIO) (OTCMKTS:PIONF) (FRA:PNL)  is an active junior exploration company focused on the exploration for key global demand-driven commodities. This includes a portfolio of high quality lithium assets in Canada and Western Australia, and a portfolio of strategically located gold and other commodity projects in sought after mining regions in WA. The Company is focused on delivering shareholder value by actively strengthening its project portfolio, and targeted exploration programs to enable the discovery and commercialisation of high value mineral resources. 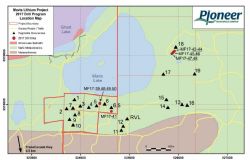 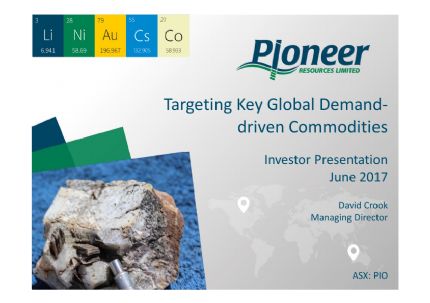