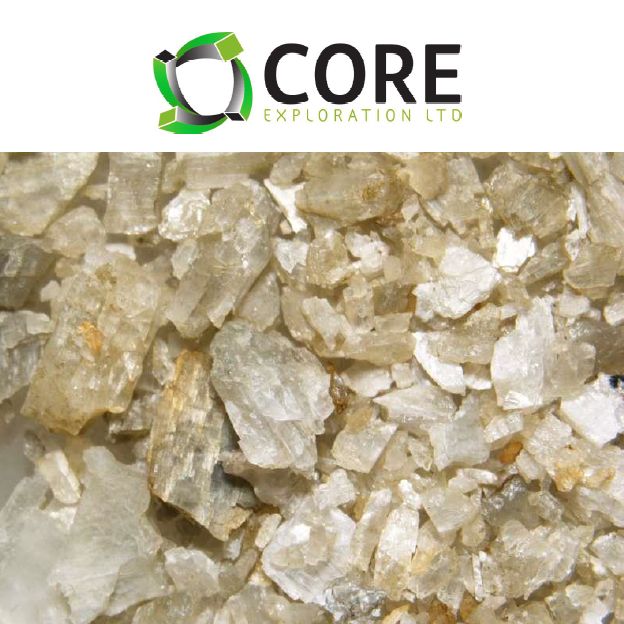 ASX:CXO) ("Core" or the "Company") is pleased to announce that it has received all outstanding assays relating to soil and rockchip sampling at the Barrow Creek Lithium Project in the Northern Territory. Regional-spaced soil samples (over 2,000 samples collected) indicate a substantially larger footprint of lithium anomalism than depicted by historic pegmatite workings.

- Barrow Creek has a long history of tin and tantalum production, similar to Core's Finniss Lithium Project (and Greenbushes)

At the Ringing Rocks Prospect a distinct lithium-in-soils anomaly is coincident with the outcrop position of two large pegmatite bodies, with surface expressions measuring 700m x 220m and 360m x 150m that may represent a single pegmatite body of approximately 1200m x 300m with surface rock chips assaying up to 0.6% Li2O.

On a local scale, rockchips and detailed mapping have confirmed the lithium potential of a number of historic prospects, including Jump Up, Ballace's Claim 1 & 2, Tabby Cat, Hugo Jack's, Boyce's Corner, Johannson's, Jody's, Slippery and Krakatoa.

Many other pegmatite occurrences were identified and investigated during the conduct of regional reconnaissance work.

Ringing Rocks is characterised by significant coincident Li-Cs-Sn-Rb anomalism and moderate coincident Li-Ta-W anomalism in pegmatite rockchips and soil geochemistry (Figure 2). A distinct lithium-in-soils anomaly is coincident with the outcrop position of two large pegmatite bodies, with surface expressions measuring 700m x 220m and 360m x 150m. These can be interpolated under cover to be a single body of approximately 1200m x 300m (orange dashed line in Figure 2 in link below).

Peak rock chip results include 0.6% and 0.2% Li2O, while the average content is 151 ppm Li (or 324 ppm Li2O). This grade at surface is consistent with surface-weathered material observed by Core at the Finniss Project prior to discovery of the high grade Grants, BP33 and Far West lithium deposits with drilling. This result is a strong indication of lithium anomalism associated with the large pegmatite body.

The largest of these targets is approximately 800m east of the Johannsons prospect, where pegmatite rock chips contain up to 362 ppm Li. The Tesla anomaly lies within or adjacent to the regional contact aureole of a large granite body. Early mapping shows that there is a pegmatite dyke swarm in the area.

A highly weathered NW-to NNW striking 500m-wide swarm of pegmatite dykes at the Jump Up prospect is anomalous in lithium with a maximum Li rock chip content of 312 ppm (Figure 4). Anomalous lithium in pegmatite rock chips is also coincident with a high lithium soil anomaly. Coincident multi-element anomalism includes good correlation of Li with Sn, Cs and Rb anomalism. This prospect has been worked historically for Sn and Ta, and the pegmatites disappear under cover in all directions.

Regional and prospect scale exploration over EL 31058 has included 2,342 soil samples, 404 rock chip samples and prospect mapping by Core's geologists. The Company has focussed its mapping and rock chip sampling efforts on historic pegmatite workings within the Barrow Creek Tin-Tantalum-Tungsten Field, but soil samples were collected over a much broader portion of the Project area (Figure 1).

Pegmatite from many of these prospects appear to be highly weathered, and it is likely that the pegmatites may be more widespread than currently revealed, under thin cover.

Analysis of assay results from the current program suggests coincident soil/rockchip lithium anomalism and pathfinder element associations (Cs-Ta-W-Sn-Rb) at a number of prospects. Combined with mapping data, Core has prioritised the targets.

The most notable are Ringing Rocks, Jump Up and the newly discovered Tesla Prospects.

As with Greenbushes in WA and Core's Finniss Project in the Bynoe Pegmatite Field in the NT, the Barrow Creek Pegmatite Field has also had a long history of tin and tantalum mining prior to lithium mineralisation being recognised.

Core believes there is an excellent fit between the lithium potential of Barrow Creek Pegmatite Field, direct rail link to Darwin Port and Core's objectives to make Darwin and Core's Finniss Lithium Project near Darwin a central processing and global transport hub for NT lithium and spodumene production as forecast lithium demand keeps growing (Figure 5 and Figure 6 in link below).

Core has the opportunity to commence drilling at the Barrow Creek Project in February-March 2018 once the current field season is completed at the Finniss Lithium Project.

With this in mind, Core has initiated a heritage clearance with the Aboriginal Areas Protection Authority (AAPA) to enable ground disturbing works at a number of the key prospects. Core would then expect to undertake RAB and RC drilling to test the highest priority targets, as outlined above. 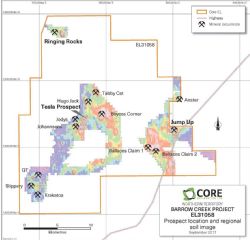 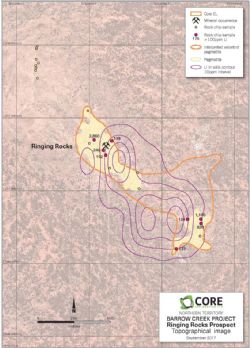 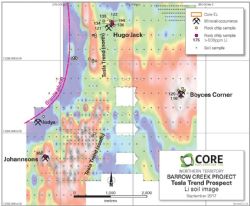 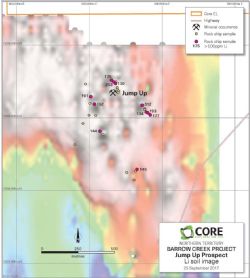 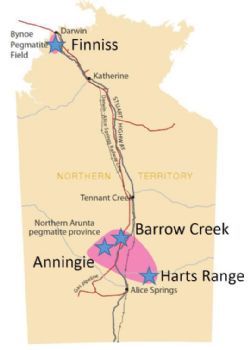 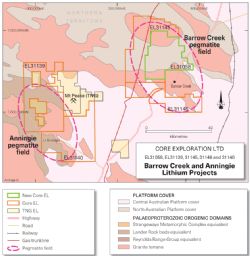