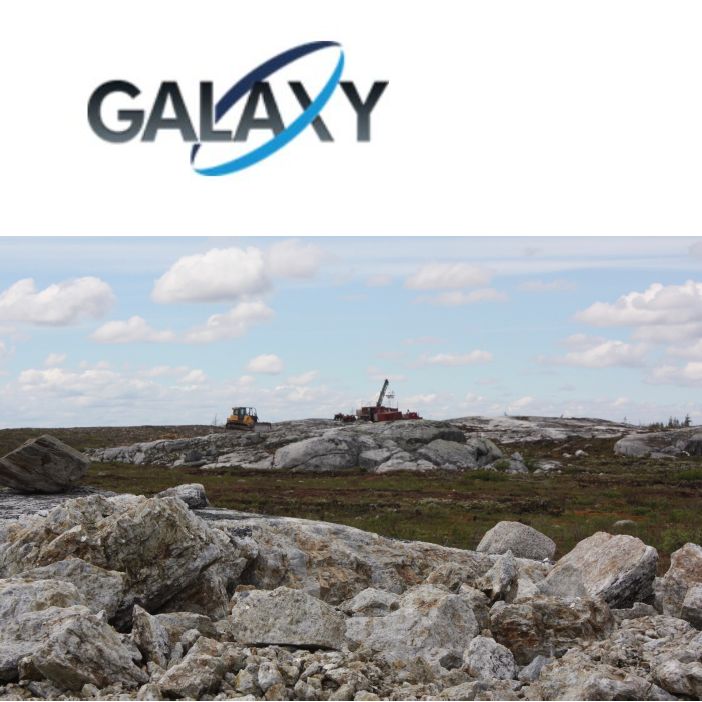 OTCMKTS:GALXF) is pleased to announce a significant mineral resource upgrade resulting from the 2017 drilling campaign at the James Bay Project in Quebec, Canada.

- Mine design and planning work has been awarded to Mining Plus

- Feasibility Study preparation ongoing, upgrade of resources to reserves expected in H1 of 2018.

Reported at cut-off grade of 0.62 % Li20 and within a conceptual open pit shell formulated to demonstrate "reasonable prospects of eventual economic extraction as tabulated (see Table 3 below). All figures rounded to reflect the relative accuracy of the estimates. Mineral resources are not mining reserves and do not yet have demonstrated economic viability.

Reported at cut-off grade of 0.75% Li20 and within a conceptual open pit shell formulated to demonstrate "reasonable prospects of eventual economic extraction" with factors as tabulated (see Table 3 in link below).

Galaxy Resources' Managing Director, Anthony Tse said the increase in resource confirms the James Bay project as a world class hard rock lithium asset, as highlighted by the grade, quality and scalability of the deposit.

"One of the key attributes of the James Bay project is that due to its high grade, scale, low stripping ratio and superior location, it will be one of the lowest cost hard rock lithium projects in the world. The pegmatite system is substantial in size and the deposit remains open at depth and also open to the east, which offers significant potential for growth, both in terms of the resource and ultimately future ore reserve."

The spodumene-bearing pegmatite bodies of the James Bay project are irregular dykes up to 60 meters in width and over 200 meters in length. The pegmatite intrusions generally strike south-southwest dipping moderately to the east-northeast (215deg/60deg).

Based on core drilling data, surface geology mapping, and outcrop channel sampling provided by Galaxy, SRK created a three-dimensional model for the main pegmatite dykes. The bodies were modelled from logged pegmatites, not Li2O grades, as implicitly derived intrusions or vein contact surfaces in Leapfrog Geo software (version 4.0.1). The resulting geological model incorporates 18 pegmatite dykes. Sixteen pegmatite bodies were created as intrusion contact surfaces with a spheroidal interpolant. Two smaller pegmatites (550 and 850) were created with the vein modelling tool within the boundaries defined by hanging wall and footwall surfaces.

SRK also modelled the overburden material, consisting of glacial till, using the logged drill intervals and mapped outcrops. The three-dimensional model is clipped to a topography surface created from a Lidar survey provided by Galaxy.

The maiden 2010 mineral resource had been based on 14,457m of diamond drilling and 201.3m of horizontal channel sampling, from 102 drill holes and 45 channel samples. This updated mineral resource estimation is supported by an additional 33,339 m of NQ core drilling in 157 diamond drill holes. (see Figures 1 and 2 in link below). All sampling is half NQ3 sized core. Sample lengths average at 1.290m. A total of 9,194 assays were completed by ALS Canada by the Li 0C63 Open Beaker method. An additional 1,093 standard and blank assays were submitted with the sample stream. These include 514 duplicates and 513 blanks. Results for check assays between ALS and SGS have been received.

SRK is satisfied that the geological modelling honours the current geological information and knowledge. The location of the samples and the assay data are sufficiently reliable to support resource evaluation. The sampling information was acquired primarily by surface channel sampling and core drilling on sections spaced at twenty-five to fifty metres. The eighteen modelled intrusive pegmatite dykes were investigated by several boreholes providing sampling to approximately twenty-five to forty metre spacing. Most pegmatite dyke domains have been sampled by a sufficient number of boreholes to model the spatial variability of lithium oxide. Accordingly, all block estimates within the conceptual pit shell have been classified as Indicated.

All samples were weighed, crushed and pulverized at ALS Canada. These were processed at ALS Val d'Or located at 1324 Rue Turcotte, Val d'Or, QC, Canada. Methods used were CRU-31,CRU-QC,LOG-21,SPL-21,WEI-21. Samples were processed at ALS Vancouver located at 2103 Dollarton Hwy, North Vancouver, BC, Canada. This is a four-acid digest method. This is analysis for lithium ore grade by method Li- OC63. This assay is for ore grade Li by specialized four-acid digestion and ICP-AES finish, with Li-specific CRMs. It is best suited to Li-bearing silicate sediments. Li range is 0.01-10%. The method precision is 5%. Assays are within expected tolerance. Umpire assaying has been completed.

This method is suitable for analyzing lithium in geological samples. A ~0.4g sample is first digested with three acids (HCLO4, HF, and HNO3) until dryness. The residue is subsequently re-digested in concentrated HCL, cooled and topped up to volume. The samples are analyzed for Li by ICPAES spectroscopy.

The cut-off grade (COG) applied is 0.62 % Li20. The COG is based on metallurgical test work that requires a head feed mineralised to support beneficiation to a spodumene product at grades and qualities that meet market requirements.

Material modifying factors have been applied to demonstrate "reasonable prospects of eventual economic extraction" by open pit, drill, blast, truck & shovel methods. Process recovery is planned to be by crush, optical sort, deslime and DMS recovery at a 2Mtpa (million tonnes per annum) throughput. Factors applied are tabulated (see Table 3 in link below). Mineral resources are not mining reserves and do not yet have demonstrated economic viability.

The James Bay Pegmatite swarm is located 10km south of the Eastmain River and 100 kilometers east of James Bay. The property is accessible by paved road from the James Bay Road which cuts through the property close to the 381km road marker on the highway Route/109 from Val d'Or, Quebec, Canada. Val d'Or is approximately 526km westward from Montreal, Quebec. A large, multi-service truck stop is located at marker 381. Discovered in the 1960's and then known as the Cyr property the site consists of a swarm of 33 pegmatite dykes that belong to the rare-element 'class', the LCT (Li-Cs- Ta) 'family' and the albite-spodumene 'type' per the classification by Cerny (1991). Two new major pegmatite dykes have been discovered in this current campaign as well as smaller swarms eastward of the known extents. The mineralised pegmatite is open at depth and to the east. The lithium bearing mineral contained in the pegmatites is spodumene LiAl (Si2O6), a member of the pyroxene group of minerals. The pegmatite swarms have dip direction ~N 125 degrees E., dip steeply at ~60 degrees and form a corridor of discontinuous dykes about ~4km in length and ~300m wide. This outcrop is to about 15-20m above the surrounding muskeg/swamp.

This phase of drilling and mineral resource estimation is complete. Feasibility studies are ongoing and the James Bay Project Notice has been submitted to both the Federal Government of Canada and the Quebec Government for determination. 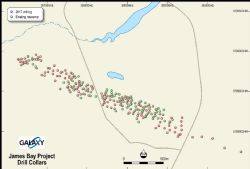 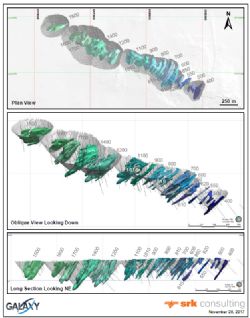