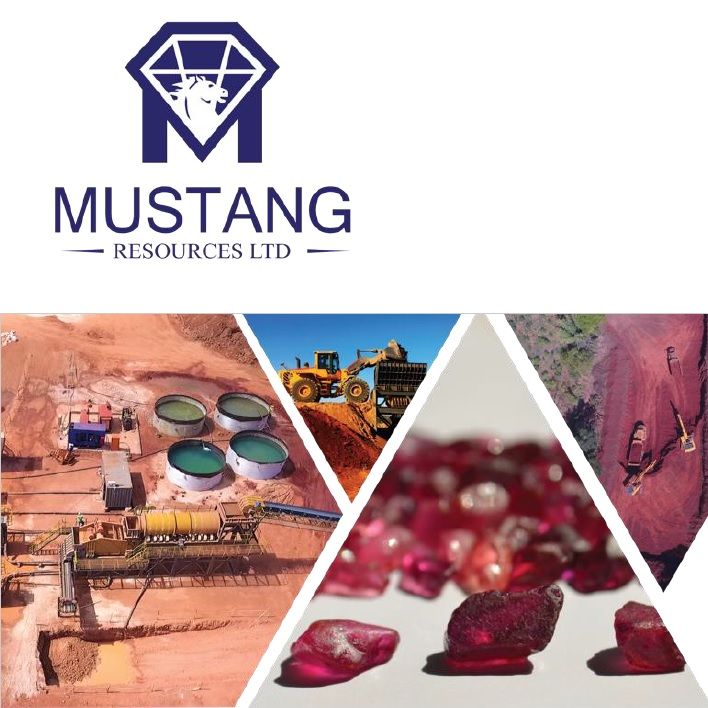 During the financial year under review the Company continued with the respective exploration programs for its Montepuez Ruby Project as well the Caula Graphite and Vanadium Project. During the second half of the reporting period, both projects were subjected to a comprehensive internal review and viability analysis of their respective current and future prospects.

During the first quarter of the financial period under review (July 2017 to September 2017) Mustang's main focus was the generation of stock for sale at its maiden rough ruby tender that was held between 27 and 30 October 2017. Mustang managed to take 405,000 carats to the maiden tender conducted at Port Louis, Mauritius. A total of 29,463 carats of rough rubies were sold and the average realised price was $24.21/ct. Gross sales proceeds of approximately $713,456 were received. As the Company acknowledged at the time, the tender results were disappointing. During 2018 Mustang initiated a comprehensive review of the project and the ongoing exploration, bulk sampling and sales activities were structured in a fashion that enable a quantitative analysis of the costs and revenue generated by the exploration program with the aim of establishing the financial feasibility of the project. A further 46,843 carats of rubies and corundum were subsequently extracted and processed on a quantifiable cost basis as part of the exploration program conducted between January 2018 and 30 June 2018. During the same period 140,411 carats of rubies and corundum were sold for $820,617. The carats sold between January 2018 and 30 June 2018 include stock carried over from the maiden tender.

The review and project viability analysis, led by management, was completed during the latter parts of the reporting period and concluded that the project was not economically viable and would require significant further funding to continue exploration and development work with a high level of uncertainty over the future viability of its project.

Subsequent to the reporting period, on 17 July 2018, Mustang announced that it had entered into a merger agreement for its Montepuez ruby assets with Fura for approximately (subject to exchange rate) 10.5 million in shares in Fura. Under the terms of the agreement, the shares are to be issued to Mustang in three tranches over 20 months from closing. The agreement contained a commitment by Fura committed to invest $25 million in further exploration and resource definition work on its expanded Montepuez Project over 3 years, subject to continued exploration success.

The Company subsequently impaired the carrying value of the Montepuez Ruby Project in the financial report to 30 June 2018 in relation to the project to $3.99 million.

In November 2017 Mustang announced its maiden JORC compliant Inferred Mineral Resource of 5.4 million tonnes at an average grade of 13.0% TGC for 702,600 tonnes of contained graphite was estimated for the Caula Graphite Deposit. A cut-off grade of 6.0% Total Graphitic Carbon (TGC) was used for the estimation and resulted in an estimate of over 700,000 tonnes of contained graphite.

During the reporting period drilled, logged, sampled and assay a total of 11 holes for 1,421.5m on the Caula Project as part of its Scoping Study work program and Graphite and Vanadium resource estimation work. The assays include intersections of up to 1.9% vanadium (V2O5) and 28.9% Total Graphitic Carbon (TGC). The results contain multiple high-grade intersections over extensive widths, including 215m at 14.72% TGC average and 0.51% V2O5 average (MODD018).

The Vanadium results include:

The Graphite results include:

On 25 June 2018 the Company announced metallurgical test work results. Metallurgical test work confirms quality graphite with cumulative proportion of large to super jumbo flakes (>180um) increased from 44% to 60% for the combined Oxide zone while the Fresh zone increased from 55% to 68%. The metallurgical testing done to date has firmly established Caula as being able to yield high percentages Super Jumbo, Jumbo and Large flakes (~68% in the fresh ore) with carbon content up to 98% (average of 97% across all products). This is a significantly better higher-value product distribution than all other peers in the Balama graphite province (including Syrah Resources) and at a high resource grade of 13% TGC. A modified and improved flowsheet design was also developed that allows for integrated vanadium and graphite extraction and high concentrate grades of more than 97% Total Graphitic Carbon have been maintained in the modified flowsheet.

The Company believes that the results of the Scoping Study will support the Board and management's confidence in the potential of both the vanadium and graphite contained in the Caula Project.