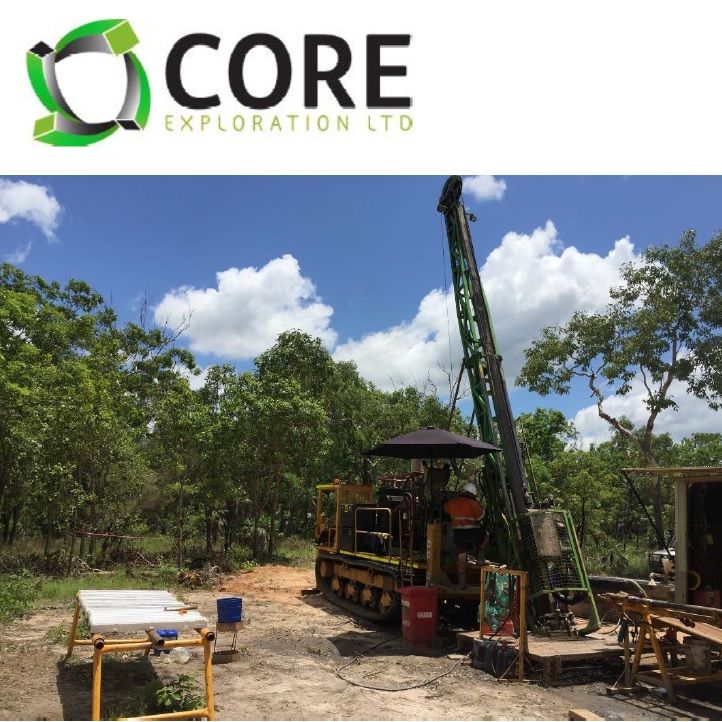 ASX:CXO) ("Core" or the "Company"), is pleased to announce new exploration drill results from the Lees, Booths and Sandras prospects and a number of other prospects within Core's 100%-owned Finniss Lithium Project in the Northern Territory ("Finniss").

These new results demonstrate the significant potential for Core to continue to expand and define substantial additional lithium resources at Finniss through exploration drilling.

- New high-grade lithium spodumene intersections from Sandras and Lees prospects demonstrates the potential to continue to expand the existing Mineral Resource base at the 100% owned Finniss Lithium Project;

- Updated Mineral Resource estimate expected from BP33 in the week ahead;

- A possible link between Lees and Booths prospects has been recognised and, if supported by future drilling, will improve the prospectivity of this area;

- Results expected throughout remainder of 2018 from continuing exploration drilling programs across multiple prospects within Finniss.

The Finniss Project, located near Darwin comprises over 500km2 of tenements covering the Bynoe Pegmatite Field. A large number of lithium-rich pegmatites have been identified on the project area to date, and ongoing exploration is expected to continue locate new pegmatite occurrences for further evaluation. Results to date have confirmed that ore-grade lithium mineralisation is widespread within many of the pegmatites and Core's drilling initiatives in 2018 are aimed at substantially growing the Mineral Resource base to underpin a potential long-life lithium mining and production operation.

Core is growing the lithium Mineral Resources in parallel with completing a Definitive Feasibility Study (DFS) for the development of mining and producing high-quality lithium concentrate from the Finniss Project. To this end, the Company is aiming to complete regulatory approvals, financing and internal approvals before commencing production at the Grants Deposit before the end of 2019. The DFS is expected to be completed during Q4 2018.

The Finniss Lithium Project has substantial infrastructure advantages supporting the Project's development: being close to grid power, gas and rail and within easy trucking distance by sealed road to Darwin Port - Australia's nearest port to Asia.

"These exploration results demonstrate the significant potential of the Finniss Lithium Project that we are yet to fully realise. The remainder of 2018 is shaping up to be a very busy one for Core as we continue to progress Grants towards development, grow the existing resource base at BP33 and potentially add new resource at Sandras. Core is also maintaining an aggressive exploration program to continue to identify new prospects and better define spodumene pegmatites such as Lees, Booths, Carlton and Hang Gong, which all look very promising as potential additional sources of ore supply.

"We are in the final phases of the DFS for the Finniss Project, which for the time being, is focused on extraction of the Resources defined at Grants and BP33 only, and we look forward to reporting the findings of the DFS in the weeks ahead"

Eight RC holes have been drilled at the Lees Prospect, improving the Company's understanding of the geology and identifying down-dip continuation of the northern-most pegmatite (see Figure 1 in link below). At least five separate pegmatite "sheets" are now interpreted (see Figure 2 in link below), and a number of those intersected in the fresh domain are strongly mineralised, including:

Drilling at Lees is showing that there are more pegmatite sheets present than first thought. Lees has the capacity to deliver a large deposit of stacked pegmatites, with shallow dips (~45 degrees to NNE). Five pegmatite "sheets" have been identified in recent drilling, which may have substantial spatial consistency and extend beyond the current drilling area (see Figures 1 & 2 in link below).

Four RC holes were drilled at Booths Prospect, targeting the down-dip potential indicated by previous drilling. 5m-10m thick pegmatites were encountered in drilling, but are only mineralised over narrow intervals. The best results include:

The 5m of mineralisation intercepted in NRC050 within a narrow 7m-wide pegmatite drilled along strike to the northwest is of note (see Figure 3 in link below). The Booths pegmatite is now interpreted to persist in that NW direction and potentially link up under cover with Lees, which has the same orientation and similar pegmatite geometry.

The recent drilling data suggests a model of a broad NE-trending synform for Lees and Booths (see Figure 1, Figure 3 in link below), with stacking and thickening of pegmatites (and an increase in lithium grade) in the hinge, however, the limbs have not yet been tested in any material way.

If continuity of thickness into the broadly folded limbs can be successfully demonstrated, this may result in a much greater areal extent for the pegmatite swarm. This scenario will be tested by a series of widely-spaced step-out holes to test for the continued presence of the upper two sheets (see Figure 4 in link below). If these and other parallel sheets prove to persist along the 1 km strike extent, this could translate to a significant volume of stacked pegmatite sheets, with shallow (45 degree) dip and therefore favorable attributes for low-strip-ratio open cut mining.

Drilling at the northern end of Sandras intersected a greater thickness of mineralised pegmatite than previously modelled:

This intercept suggests the body thickens on a vertical plunge and that the deeper part of the body is incompletely tested below ~160m vertical. However, Core has now collected sufficient data to define a maiden Mineral Resource estimate, which will be undertaken in November.

Three RC holes have been drilled at BP31 Prospect, an isolated lozenge shaped pegmatite 1.5 km west of BP33 (see Figure 7 in link below). Surface information, including RAB and costean mapping, did not suggest the prospect was of significant size, but a scout RC hole demonstrated that the geometry of the body is significantly different to the surface predictions.

A surprisingly good downhole intercept of 13m @ 0.74% Li2O (FRC185) within 32m of pegmatite was found at BP31, the upper part of this pegmatite intercept appears to be depleted in lithium, partly due to weathering of the top segment of the pegmatite.

Next Steps - Exploration and Resource Estimation 2018

Regional exploration has stepped up at the Finniss Project and will continue through to the wet season in late November 2018. Methods employed include geological mapping, auger mapping, RAB drilling and RC drilling.

Exploration drilling also continues in the north (within EL30015 and northern EL29698), including Hang Gong, Carlton, Rubicks, BP2, BP6 and Roses (see Figure 7 in link below). Results will be published as they are received and interpreted.

Mineral Resource (upgrade) estimation is currently underway for BP33 and this is expected to be completed shortly. In addition, Core will publish a maiden Mineral Resource estimate for Sandras during November. Following completion of the BP33 resource update, Core will be in a position to finalise its DFS which will be based on the mining of the Grants and BP33 deposits to produce a high grade spodumene concentrate for export.

Based on the strength of the high grade intersections from several prospects outside of the defined Mineral Resources, Core expects to continue to substantially increase the Mineral Resources base for the Finniss Project ahead of the Company commencing mining and production, currently planned to commence in 2019. 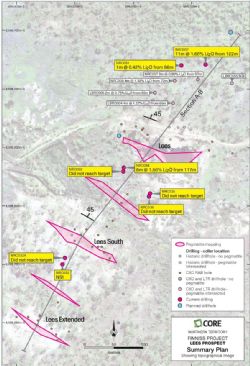 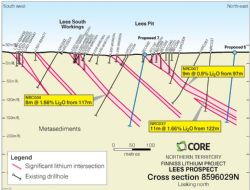 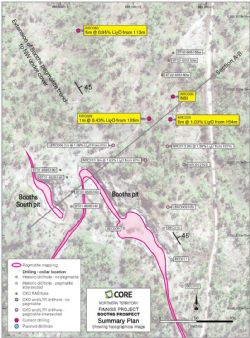 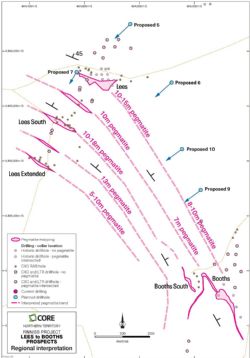 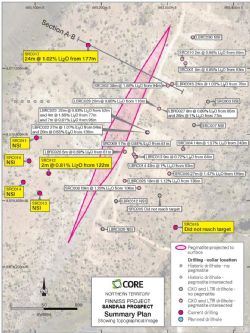 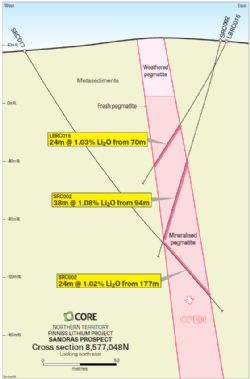 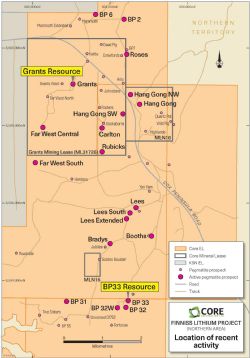 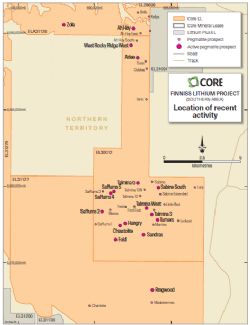