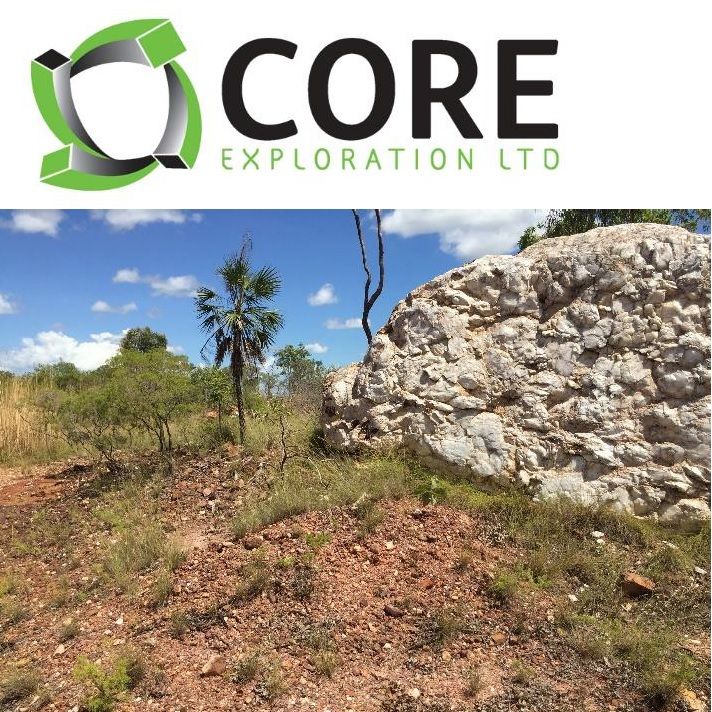 FRA:7CX) ("Core" or "the Company"), is pleased to announce a substantial Mineral Resource upgrade for its BP33 Lithium Deposit at the Finniss Lithium Project in the Northern Territory ("Finniss Project").

- BP33 Lithium Resource is now classified as Indicated and Inferred

- Size and average grade of Finniss Project Lithium Mineral Resource has also increased and now stands at 5Mt at 1.5% Li2O

- Additional mining inventory defined is expected to result in a longer mine life at the Finniss Project, and further enhance the robust economics

Commenting on the results, Core's Managing Director, Stephen Biggins, commented "The excellent results from BP33 confirm our expectations that the Finniss Lithium Project will have extremely robust economics. We look forward to publishing the DFS in late November."


The Mineral Resource tonnes have grown by 51% in size at BP33 to 2.15Mt and the already high grade has increased to 1.5% Li2O. The resource confidence classification has also improved to Indicated and Inferred (Table 1) - previously only Inferred Mineral Resource announced.

The increase in the size, grade and confidence of the estimate of the BP33 Resource, together with the recently announced 42% increase in resources at the Grants Lithium Deposit (ASX 22/10/2018), enhances the potential for the Finniss Project to deliver robust returns, which is expected to be confirmed by the Definitive Feasibility Study (DFS).

The BP33 Lithium Mineral Resource estimate currently comprises 2.15Mt @ 1.5% Li2O (Table 1) and is one of the highest-grade spodumene resources in Australia.

The global Mineral Resource for the Finniss Project is now 5.0Mt @ 1.5% (Table 1) and is expected to grow further in coming weeks when a new Mineral Resource estimate is announced at Sandras.

Additional drilling at BP33, targeting both an increase in resource confidence and size is planned for the near future.

Core is now in the final stages of completing a Definitive Feasibility Study (DFS) for the development of a spodumene concentrate operation from the Finniss Lithium Project and expects to deliver the DFS in late November 2018.

Core is targeting commencement of mining and construction mid-2019 and first production of high-quality spodumene concentrate in late 2019, subject to financing and regulatory approvals.

The DFS is expected to dramatically build on the strong financial outcomes highlighted in the Pre-Feasibility Study (PFS) (ASX 25/06/18). The DFS is factoring in substantially expanded Mineral Resources and longer mine life, optimised recoveries and increased grade of product as well as committed offtake and customer prepayment finance.

The Finniss Lithium Project has arguably the best supporting infrastructure and logistics chain to Asia of any Australian lithium project. The Project is within 25km of port, power station, gas, rail and 1 hour by sealed road to workforce accommodated in Darwin and importantly to Darwin Port - Australia's nearest port to Asia.

Core has established offtake and prepayment and is also in the process of negotiating and finalising further agreements with some of Asia's largest lithium producers that, at a high level, cover the Project's modest capex requirements and potentially fully finance the Company into production in 2019.

The BP33 orebody averages 25m and is over 200m long and characterised by consistent, high-grade spodumene mineralisation from one wall to the other. These characteristics and scale of orebody enable a simple open pit operation producing consistent high grade with low dilution utilising the efficiencies of bulk mining equipment.

The BP33 Mineral Resource report notes that fresh pegmatite at BP33 is composed of coarse spodumene, quartz, albite, microcline and muscovite. Spodumene, a lithium bearing pyroxene (LiAl(SiO3)2), is the predominant lithium-bearing phase and displays a diagnostic red-pink UV fluorescence. The pegmatite is not strongly zoned, apart from a thin (1-2m) quartz-mica-albite wall facies. Overall, the lithium content throughout the pegmatite is notably consistent.

BP33 has a relatively flat grade-tonnage curve at the 1.5% Li2O "sweetspot" for spodumene production (Figure 5). A high 0.75% Li2O cut-off grade results in little reduction in the contained tonnes, demonstrating the consistent high-grade nature of the Mineral Resource.

Dr Graeme McDonald (BSc PhD MAusIMM) was contracted by Core to undertake the Mineral Resource Estimate for the BP33 Lithium Deposit. As part of the preparation of the Resource Estimate, Dr McDonald developed a geological interpretation based on cross sections, generated a 3D geological interpretation from interpreted cross sections, created domain interpretations for lithium, developed a block model of the deposit, undertook a geostatistical analysis of the data and estimated lithium grades.

The pegmatites are predominantly hosted within the early Proterozoic metasedimentary lithologies of the Burrell Creek Formation and are usually conformable to the regional schistosity. The Bynoe pegmatites are classified as LCT (Lithium-Caesium-Tantalum) type and are believed to have been derived from the ~ 1845 Ma S-Type Two Sisters Granite which outcrops to the west.

Fresh pegmatite at BP33 is composed of coarse spodumene, quartz, albite, microcline and muscovite (in decreasing order of abundance). Spodumene, a lithium bearing pyroxene (LiAl(SiO3)2), is the predominant lithium bearing phase and displays a diagnostic red-pink UV fluorescence. The pegmatite is not strongly zoned, apart from a thin (1-2m) quartz-mica-albite wall facies and some barren internal quartz veins.

The majority of holes have been drilled at angles of between 55 - 60deg and approximately perpendicular to the strike of the pegmatite.

Geological and assay data for all drill holes was used in the geological interpretation and MRE. The only exception being the assay data for 1 recently completed diamond hole (FDD008) had not been received prior to the MRE being undertaken.

Samples were collected from RC drilling and when submitted for assay typically weighed 2-5kg over an average 1m interval. RC sampling of pegmatite for assays is done on a 1 metre basis. 1m-sampling continued into the barren wall-zone of the pegmatite and then a 3m composite was collected from the immediately surrounding barren phyllite host rock. RC samples were homogenised and subsampled by cone splitting at the drill rig.

Drill core was collected directly into trays, marked up by metre marks and secured as the drilling progressed. Core was cut firstly into half longitudinally along a consistent line, ensuring no bias in the cutting plane. Again, without bias, half core was then cut into two further segments. Depending on the hole, a half or quarter was then collected on a metre basis where possible but not less than 0.3m in length, determined by geological and lithological contacts.

All samples were sent to North Australian Laboratories (NAL) in Pine Creek for preparation and analysis.

A 0.3 g sub-sample of the pulp is digested in a standard 4 acid mixture and analysed via ICP-MS and ICP-OES methods for the following elements: Li, Cs, Rb, Sr, Nb, Sn, Ta, U, As, K, P and Fe.

In the 2016-2017 drilling, all samples were also analysed via the fusion method - a 0.3 g sub-sample is fused with a Sodium Peroxide Fusion flux and then digested in 10% hydrochloric acid. ICP-OES is used for the following elements: Li, P and Fe. Exhaustive checks of this data suggested an excellent correlation exists, so in 2018 a 3000 ppm Li trigger was set to process that sample via a fusion method.

Standards, blanks and duplicates have all been applied in the QAQC methodology. Sufficient accuracy and precision have been established for the type of mineralisation encountered and is appropriate for QAQC in the Resource Estimation.

The current Mineral Resource Inventory for the BP33 Deposit has been reported at a cut-off grade of 0.75% Li2O which based on current modelling for the nearby Grants Deposit, approximates the current break-even operating cost estimate for an open pit development. No top cuts were applied.

Grade continuity analysis was undertaken in Micromine software for Li2O for the mineralised domain and models were generated in all three directions. Parameters were used in the block model estimation. A block model with a parent block size of 5x10x10m with sub-blocks of 1.25 x 2.5 x 2.5m has been used to adequately represent the mineralised volume, with sub blocks estimated at the parent block scale.

Density data was supplied by Core and is consistent with expected values for the lithologies present and the degree of weathering. Within the block model, density has been assigned based on lithology and oxidation.

The resource classification has been applied to the Mineral Resource Estimate based on the drilling data spacing, grade and geological continuity, and data integrity. Portions of the model that have drill spacing of better than 25m by 30m, and where the confidence in the estimation is considered high have been classified as Indicated Mineral Resources. Areas that have drill spacing of greater than 25m by 30m, and/or with lower levels of confidence in the estimation or potential impact of modifying factors have been classified as Inferred Mineral Resources. The classification reflects the view of the Competent Person.

It has been assumed that the traditional open cut mining method of drill, blast, load and haul will be used. No other mining assumptions have been made.

No metallurgical recoveries have been applied to the Mineral Resource Estimate.

It is the view of the Competent Person that at the time of estimation there are no known issues that could materially impact on the eventual extraction of the Mineral Resource.

Link: Over 50% Increase in BP33 Lithium Resource to Boost DFS