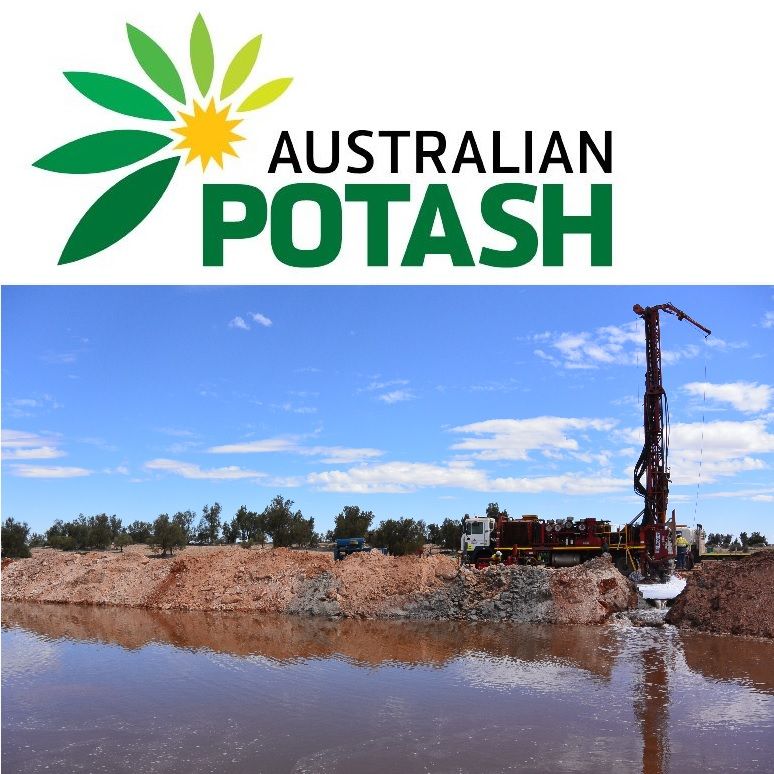 ASX:APC) (APC or the Company) is pleased to advise the commencement of the final field programs of work in the Definitive Feasibility Study (DFS) of the Lake Wells Sulphate of Potash Project (Project).

o Long term pump testing of production wells confirming flow rates, which will in turn underpin the hydro-flow model for the bore-field design

Managing Director and CEO, Matt Shackleton, commented: "Integral to any mineral project's success is the quality of the JORC Resource estimate underpinning it, and the Lake Wells SOP project is no different. Project developments of this nature have to demonstrate to the lowest level of risk, both longevity of production, and recoverability of minerals. A bore-field permits an easier assessment of at least the recoverability of brine, and is a well-tried and proven method for abstracting brine.

"Central to the final field program at Lake Wells is the push to a JORC Reserve estimate, and our focus is on building upon the more than 50,000 metres of drilling and already extensive database of testwork that comprises the existing, robust JORC Compliant SOP mineral resource estimate which contains over 12 million tonnes of gravity recoverable SOP at the Indicated level (see Note below).

"Developing more production wells, test-pumping them, and collecting bed-rock core for analysis are critical factors that will feed into the calculation of an Ore Reserve estimate for Lake Wells.

"APC's extensive geotechnical field and test-work at the Project have revealed the existence of a uniform, flat lying layer of low permeability clay at the lake surface that can accommodate 'on-playa' evaporation ponds. Because of this, we can avoid the large scale capital expenditure required to line the pre-concentration ponds with HDPE plastic. The final geotechnical field trials will allow us to establish the optimal commercial-scale pond design, in terms of cost of construction and effectiveness of the design.

"We will round out the environmental surveying program that has been underway at Lake Wells for nearly two years. This final program is scheduled to conclude shortly.

"We look forward to providing shareholders with regular updates on these final programs of work, as the Lake Wells DFS draws to its conclusion and the Board turns its attention to development and project funding strategies over the second half of 2019."

Subsequent to reporting the JORC 2012 compliant Indicated Mineral Resource(see Note below) in March 2017, significant additional work has been completed, enhancing APC's understanding of the resource. Drilling, passive seismic surveys, brine assays, and particle size distribution tests have been completed, adding significant confidence in the resource and indicating a potential expansion of the resource. Areas where the resource is likely to be increased include the central area (that was not held by APC at the time of the Scoping Study but has since been acquired) and further extensions in the south-west of the project area.

Additional drilling has totaled 3,180m and includes two production bores completed since the calculation of the reported Resource.

A further 52,600m of passive seismic data has been generated, which contributes to the understanding of the Lake Wells palaeovalley model, and has facilitated identification of drill targets for the current program.

Two or three large diameter production bores will be completed along with associated monitoring bores to assess aquifer response during pumping.

The level of detail in the original Resource model, combined with the additional data collected in the last two years, makes APC very confident in its Resource estimate. The Company looks forward to reporting a Resource expansion as a result of the upcoming work. Increasing resource confidence aligns with the JORC code (see Figure 2 in link below) where both geological knowledge has increased along with accuracy of the modifying factors developed through the DFS.

Successful long-term pump testing was conducted at Lake Wells in 2017(see Note i below) and additional tests will be conducted at several different locations to confirm the observations recorded previously, and finalise the Reserve estimate.

In groundwater analysis, aquifer response is a function of the "log of time" and not linear time.

For example, a 20 year pumping project comprises 10 million minutes of pumping while a 30 day pumping test comprises approximately 40 thousand minutes. On a linear scale this pump-test time is relatively minor in comparison to the total LOM pumping time.

However as aquifer response is not measured in linear time, but responds in a logarithmic fashion, a 30 day pump-test is equivalent to 65% of mine life for a 20 year LOM project, when viewed on log time.

The Australian brine SOP projects and those similar style, overseas lithium brine projects that are proposing to source their brine using a bore-pumping system use the same understanding of aquifer response scales to assess their aquifer production capabilities.

Between 2016 and 2017, geotechnical investigations of the Lake Wells area were completed. The work included:

- Bulk and undisturbed soil sampling for laboratory testing, and;

These investigations provided the basis for the on-playa (pre-concentration) and off-playa (harvest) evaporation pond layouts. In 2018, geotechnical engineers, Knight Piesold (KP), were engaged to advance the pre-concentration pond design in conjunction with Novopro Projects (Novopro), the Montreal-based, solar salt processing experts. KP completed hydraulic models and, steady-state and transient seepage analyses which contribute to Novopro's evaporation and brine chemistry models to develop pond size and configuration. Seepage containment designs were also modelled by KP and will be analysed as part of the upcoming trial pond program.

HDPE-lined, off-playa, pilot evaporation ponds were constructed and filled with Lake Wells Paleochannel brine in late 2017. Over the course of 2018, evaporation and salt crystallisation in the pilot ponds were monitored and recorded against the Novopro models. Following adequate evaporation and crystallisation in the pilot pre-concentration pond, the concentrated brine was transfered between the pilot harvest ponds to produce the potassium (K) and sulphate (SO4) bearing salts, as predicted in the numerical models. More than 20 tonnes of salts were produced as a result of the pilot evaporation program and more than three tonnes of these salts were delivered to Bureau Veritas in December 2018 to commence the pilot processing program. The pilot process was designed by Novopro, following the process flowsheet developed for the project. The delivered salts underwent assay and XRD analysis before processing preparation; more than 250 kg of high-quality Sulphate of Potash (SOP) was produced in January 2019.

The Novopro process design, including flowsheets, mass balance, specifications and data sheets, is complete and was handed over to Lycopodium Minerals Ltd (Lycopopdium). Lycopodium is now completing the DFS plant design, capital and operating costs estimates, and implementation plan. A risk assessment will be completed with participation of all technical consultants as part of the DFS.

The Project was referred to the Environmental Protection Authority (EPA) in December 2017 and it was determined that the Project would be formally assessed, through an Environmental Review Document (ERD), in February 2018. An Environmental Scoping Document was approved and published by the EPA in September 2018.

To inform the development of the ERD and DFS, APC have completed several studies and baseline surveys within and adjacent to the salt lake system, including terrestrial fauna, subterranean fauna, and flora. In addition to fauna and flora assessments, the ERD will include the groundwater abstraction plan. While also substantiating the resource and reserve models, the upcoming drilling and pump testing work will also contribute significantly to validating the water management plan as part of the ERD.

i Refer to ASX announcement 21 November 2017 'Pumping Test Confirms Drainage from Entire Palaeochannel Sequence into Basal Production Aquifer'. That announcement contains the relevant statements, data and consents referred to in this announcement. Apart from that which is disclosed in this document, Australian Potash Limited, its directors, officers and agents: 1. Are not aware of any new information that materially affects the information contained in the 21 November 2017 announcement, and 2. State that the material assumptions and technical parameters underpinning the estimates in the 23 March 2017 announcement continue to apply and have not materially changed. 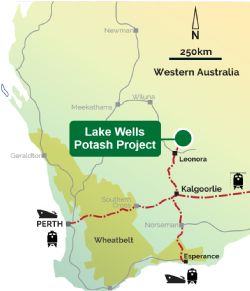 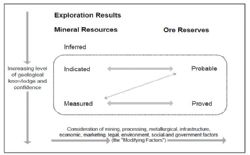 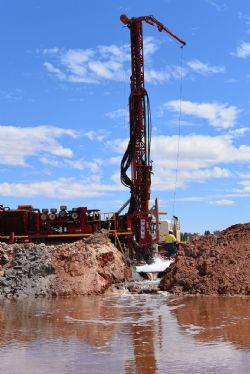 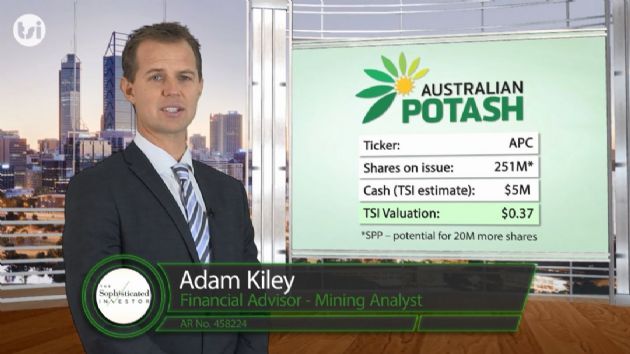 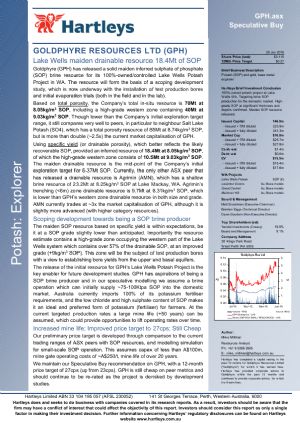