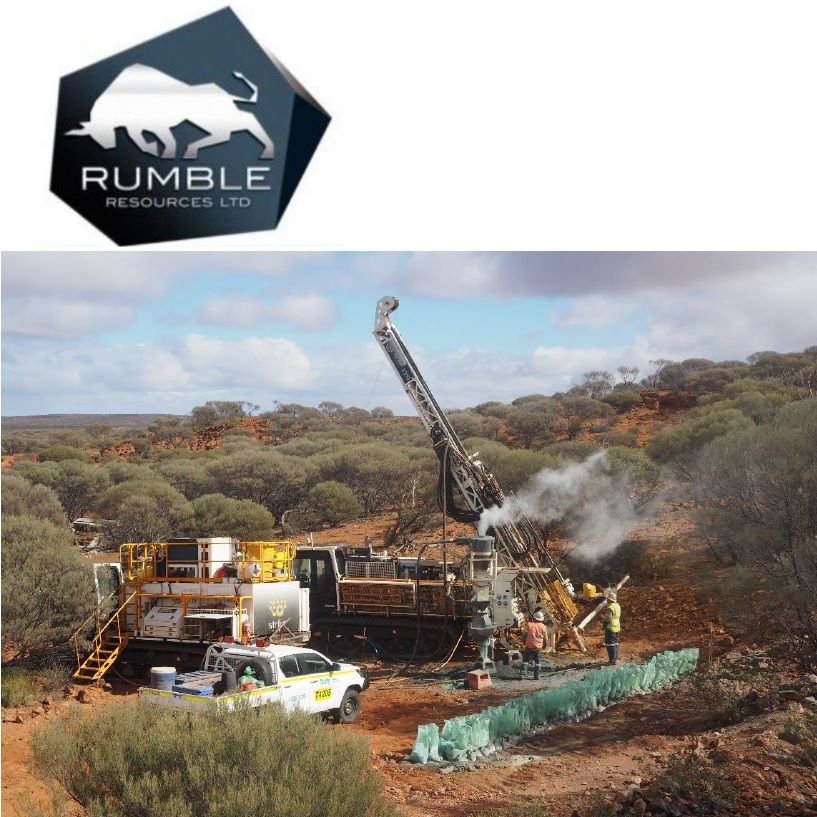 Regionally, ten air core drilling reconnaissance traverses were completed over a strike of 9km with the principle aim of testing high order Cu - Au in soil anomalies and geophysical targets under shallow cover. A new zone of shallow lateral high grade cobalt with platinum anomalism has been discovered under cover 3km to the southwest of the White Rose Prospect. The cobalt - platinum mineralisation is completely open with up to 10km strike potential.

Rumble has now acquired two exploration licence applications (100% ownership) covering the inferred northern strike extension of the copper-gold mineralised corridor that extends over a known strike of 9km. The additional tenure and inferred zone has increased the strike of the prospective Cu-Au corridor to 25km.

Two additional traverses (50m spaced either side of the first traverse) has confirmed continuity of the high-grade cobalt with platinum mineralisation. The lateral mineralisation is under shallow cover (5m). The host geology is a medium grain pyroxenitic intrusion.

Multi-element assaying has been completed on one metre samples. Significant results include:

- The Co - Pt mineralisation is completely open along strike - There is over 10km's of strike within the ultramafic units that occur along a strongly magnetic trend (see image 2 in link below).

- The regional air core drilling by Rumble has only tested a very small percentage of this prospective ultramafic package.

- Rumble will fast-track systematic shallow air core traverses along strike to scope out any high-grade lateritic cobalt mineralisation, with up to 10km of strike potential

A differentiated mafic sill has been delineated with the latest round of drilling. Previous exploration by Rumble had defined a zone of significant Cu - Au mineralisation associated with a fine grain noritic intrusive with significant intercepts including 22m @ 1.00% Cu from 29m coincident with 19m @ 2.19 g/t Au from 33m (WRRC001) (refer ASX announcement 30 August 2018). The current drilling has extended the Cu - Au mineralisation along strike and defined the width of the sill. The sill is up to 150m in width dipping 75deg to the north and trending east-west. The sill is transgressive, cutting across the trend of the older Archaean greenstones (trend northeast with 70deg northwest dip). The Cu - Au mineralisation is interpreted to be at the base of the mafic portion of the sill. Footwall to the sill are talc chlorite schists and intercalated pyroxenitic ultramafic rocks with strongly elevated copper and an increase in PGM's. The footwall rocks may represent a lower ultramafic stage to the sill.

The current drilling has returned significant Cu-Au mineralisation to the east of the previous mineralisation and has extended the "basal" prospective zone to a strike of at least 350m. RC drilling results include:

Mineralisation is chalcopyrite, bornite and pyrite. The style is considered ortho-magmatic with gold associated with the copper sulphides. Overall sulphur is low (<2% total S in primary zone).

The differentiated Cu-Au mafic sill has been intruded by at least two later dolerite to gabbro dyke sets. The dykes commonly jack the sill.

The current drilling has identified a preserved copper-gold mineralised basal zone that is associated with a differentiated mafic sill (up to 150m thick) at White Rose. The preserved mineralisation is likely part of a larger mafic sill complex that has been further intruded by a series of younger dolerite and gabbro dykes. Rumble has now completed three (3) RC traverses (relatively shallow drilling) which have confirmed 350m of strong copper-gold mineralisation.

Rumble considers the ortho-magmatic copper-gold mineralisation to be a sill-like feeder zone/channel with potential for higher grade sulphides to occur down the dip plunge (at deeper levels) rather than along strike.

- Important: The three RC traverses drilled by Rumble, and subsequently modelled, appear to have only tested the upper extent of what may potentially be a much larger system below (see image 7).

Mineralisation is disseminated, sulphur poor and not magnetic (mafic sill has a low magnetic response) at the White Rose Prospect and therefore not conducive to ground TEM (transient electromagnetic) or detailed magnetic exploration methodologies.

- Orientation IP (induced polarisation) will be conducted over the prospective mafic sill to potentially delineate chargeability and "bulk conductivity" targets at depth for drill testing.

Rumble considers the White Rose differentiated Cu-Au mafic sill to be part of a larger sill complex. Widespread Cu anomalism occurs over some 25km of strike. Regional air core drilling (see table 2) has highlighted the high background copper over some 10km of strike. Given the significant cover over the project area, there is significant potential to find additional copper-gold bearing mafic sills.

- To find other differentiated Cu-Au mafic sills within the Munarra Gully Project, copper geochemistry is the most effective tool. Further shallow air core drilling is planned to test the inferred copper-gold corridor over the 25km of strike. 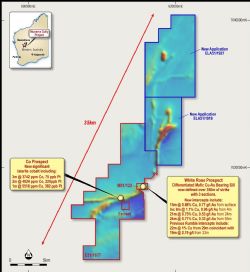 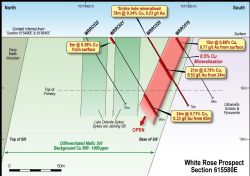 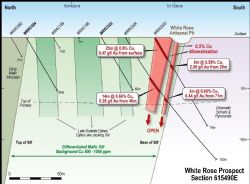 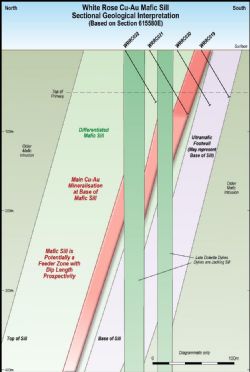 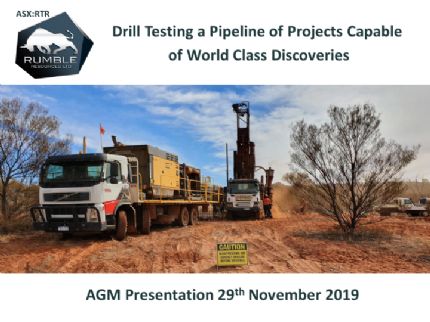