OTCMKTS:CNPTF) advises that on 2 May 2022, the Palm Valley 12 (PV12) well in OL3, Southwest of Alice Springs in the Northern Territory, had reached a depth of 820m at 0600 hrs ACST and is currently drilling ahead. In the past week a total of 599m of drilling has occurred. Total depth for the 17.5" hole section which is currently being drilled is planned at 1100m. At this point the 13 3/8" casing string will be run and cemented in preparation for drilling ahead in 12 1/4" hole.

The PV12 well has two alternate objectives, consisting of a deeper gas exploration target or a shallower gas appraisal lateral that could become a production well. The primary exploration target is the Arumbera Sandstone at an anticipated depth of 3,560m. 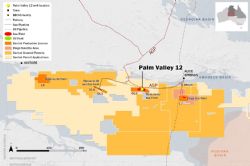