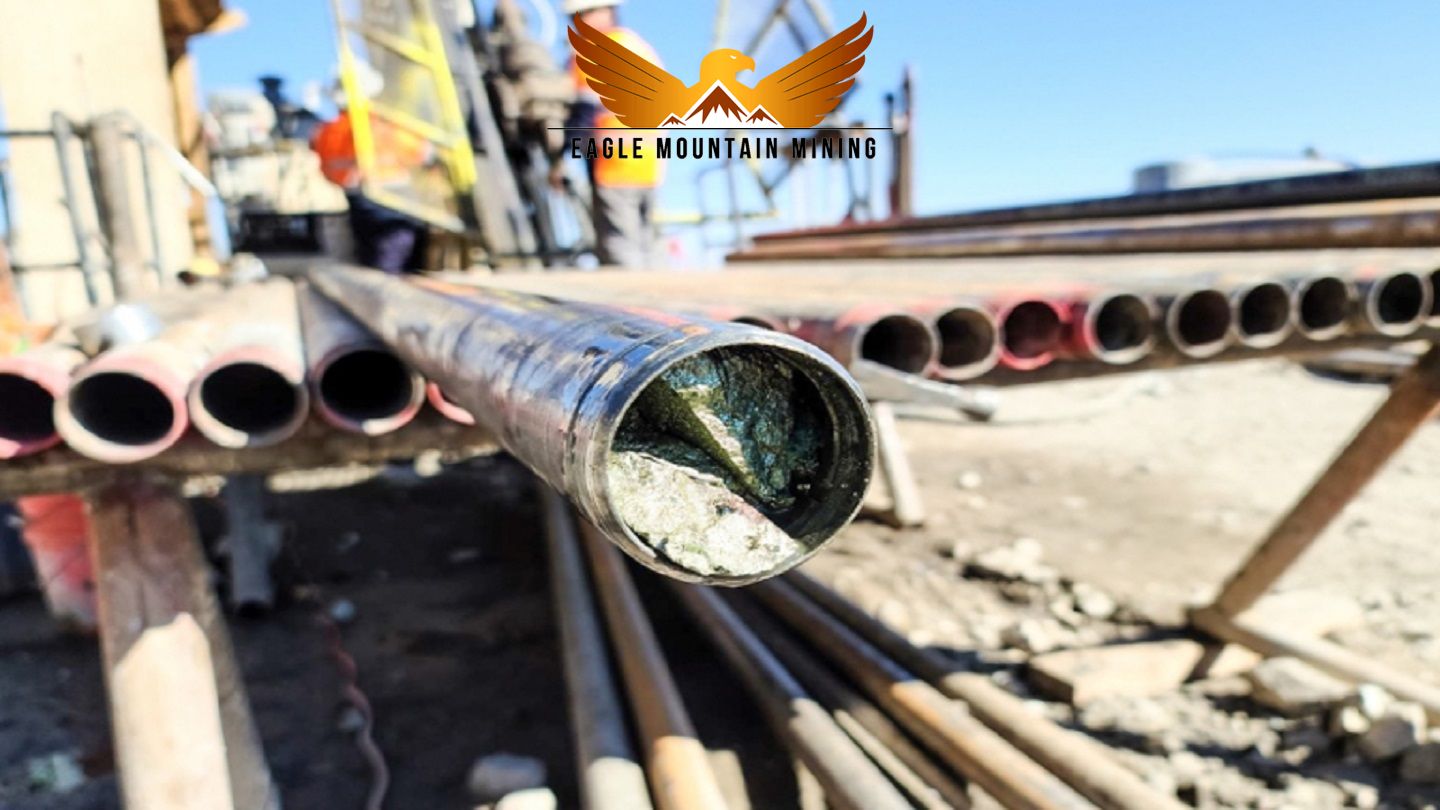 EGMMF:OTCMKTS) is pleased to provide an update on its 100% owned Oracle Ridge Copper Mine Project (Oracle Ridge, or the Project) in Arizona, USA.

"New drilling over a 1.5km strike continues to deliver strong results that supports our thesis that Oracle Ridge has the potential to be a copper project of significance in the U.S.

The Company's new geologic model, backed by over 100 new drill holes, is being used to refine the resource estimate and is driving new and successful high-value targets particularly in the southern Talon region. This area will be a key focus for exploration activities in the short term.

We are also seeing some very high gold values, which could provide attractive sweeteners for a future operation."

Results for 17 resource expansion holes have been received (Table 1, Attachment 1*) which continue to support potential growth of the recently updated MRE at a 1% copper cut-off grade. Key observations from the new drill holes include:

- WT-22-83, WT-22-96, WT-22-100 and WT-22-103 were completed in the south-western Talon region to verify the extent of prospective stratigraphy in the area. These drill holes encountered Leatherwood intrusive at shallower depth than anticipated with only minor mineralised intersections in the sediments. Best results include 4.5m at 1.61% Cu, 13.04g/t Ag and 0.24g/t Au in drill hole WT-22-83; and

- WT-22-89 was drilled in the Central Talon area and did not return significant intercepts. The hole encountered an unusually thick quartzite, a rock type not conducive to skarn mineralisation.

Results from two holes completed in this area have been received: WT-22-104, WT-22-107. Both holes intersected thin, discontinuous mineralisation only.

- WT-21-76 was drilled between the area linking the Southern and Western Talon. Surprisingly, a sample within the Leatherwood sill returned a gold grade of 40.30g/t over one metre. This is the highest gold assay ever recorded at Oracle Ridge. The sample was collected near a structure characterised by some veining and oxidation. While the intercept is structurally controlled along a vein, such high-grade zones, while likely to be limited in size, could provide incremental value for future mining operations;

- WT-22-101 and WT-22-102 were drilled in the northern part of Project, testing the north-western mineralisation in the main mine area. Both holes intersected only limited alteration and mineralisation; and

The Company is planning the refurbishment of the existing underground mine. This will enable drilling from underground along with access to obtain samples for metallurgical test work. Various contractors and consultants have undertaken site visits and a contract is expected to be awarded in the coming weeks with underground operations to commence shortly thereafter.

Drilling from underground is scheduled to commence in the September quarter of 2022. The average hole length of the underground holes is expected to be approximately half that from surface, which provides significant improvements in drilling efficiency.

Two drill pads have recently been completed at the southern end of the Talon. Drilling is now in progress from one of these pads, targeting the prospective Wave zone towards the historic Leatherwood mine. The Leatherwood mine includes two tunnels extending for approximately 50 metres connected by an internal shaft. A shipment of ore in 1969 consisted of about 45 tonnes of hand-sorted ore composed of approximately 12% copper, 200g/t silver and 1g/t gold (Figure 3*). No other production records are known.

Eagle Mountain Mining Limited (ASX:EM2) (OTCMKTS:EGMMF), is a copper-gold explorer focused on the strategic exploration and development of the Oracle Ridge Copper Mine and the highly prospective greenfield (Silver Mountain) project, both located in Arizona, USA.

Arizona is at the heart of America's mining industry and home to some of the world's largest copper discoveries such as Bagdad, Miami and Resolution, one of the largest undeveloped copper deposits in the world. 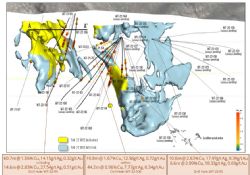 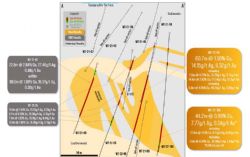 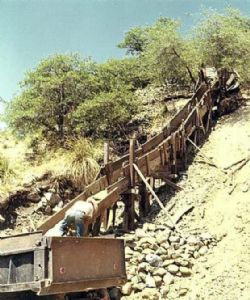 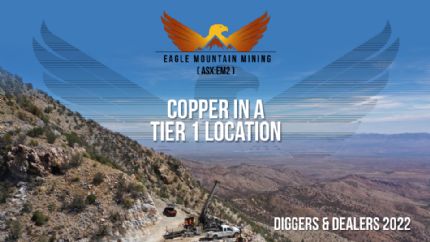 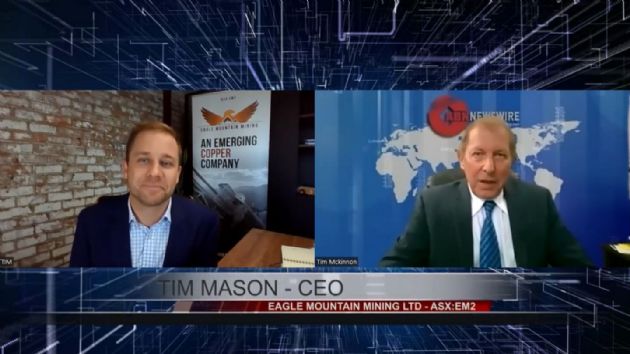 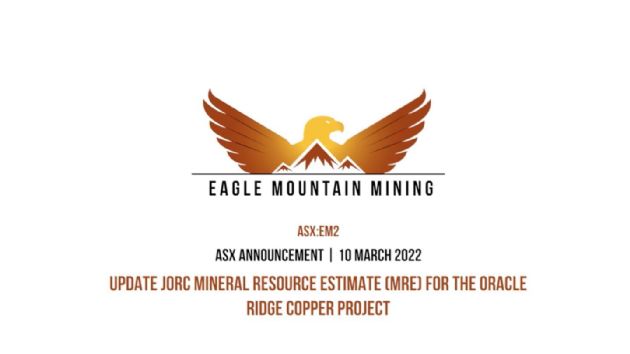 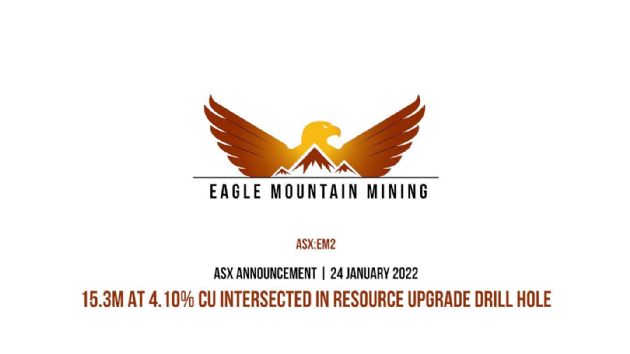 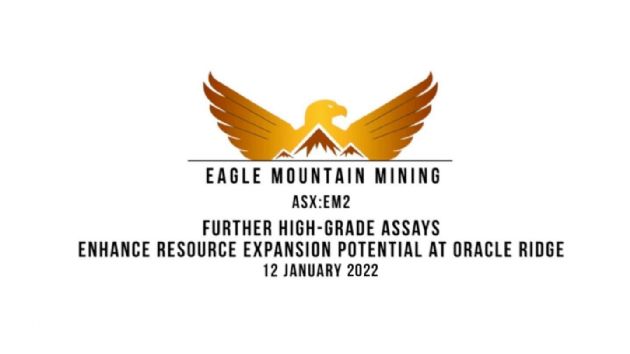