Perth, Feb 25, 2009 (ABN Newswire) - Image Resources NL (ASX:IMA)(PINK:IMREF) would like to offer you details of a presentation titled "Enhancement of Resource at Cooljarloo and up to 45% Zircon in Eucla" which was made available by Mr George Sakalidis, Managing Director, to Boardroomradio on Tuesday 24 February 2009 at 2:00pm AEST.

As reported in Image's December 2008 quarterly report, an infill aircore drilling programme has been carried out on the southern extent of the Atlas resource at Cooljarloo (Image 70%) with the aim of closing the drill spacing to 200m x 20m to provide greater confidence in the grade and continuity of the mineralisation and to upgrade the status of the resources.

A substantial proportion of the high grade results occur outside the current Atlas resource model and covers a strike length of about 1.6km, indicating the likelihood of a significant increase in both the size and grade of the presently identified resource.

The remaining two thirds of the samples, covering a strike length of about 2.2km, are expected to be processed over the next month with a further release of results expected at that time. Following receipt of all the results, it is planned to carry out further test work on the Atlas mineral assemblage, followed by an update of the Atlas resource model, which is expected to be completed during the June 2009 quarter.

In addition to the drilling described above, Image has completed a further 60 aircore holes at Atlas to test additional infill and new parallel targets. Drilling has now commenced at Cataby West (some 50km south of Cooljarloo) to test a number of new targets identified by ground geophysical surveys. The Cataby West drilling forms part of Image's ongoing systematic testing of numerous targets totalling some 292km of strike identified to date on the North Perth Basin project.

Boonanarring is arguably one of the highest grade, zircon-rich mineral sands projects in Australia. Construction and project commissioning were completed on-time and on-budget in 2018. Production commenced in December 2018 and HMC production ramped-up to exceed name-plate capacity in only the second month of operation. The Company achieved profitability in Q1 2019 and was cashflow positive in Q2 2019 and is now at steady state production. 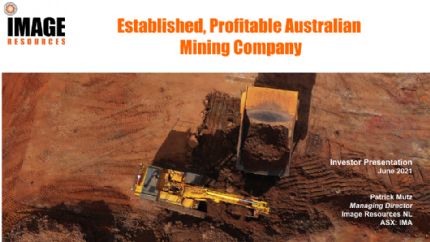