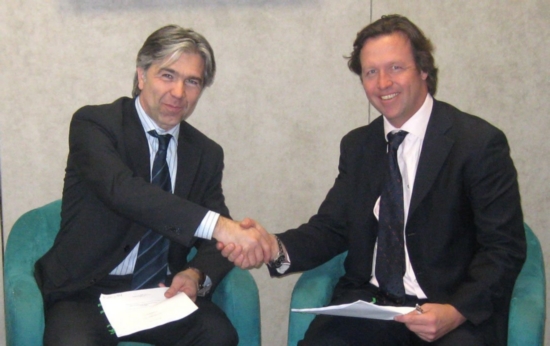 Elettrogas, and also it's parent SoEnergy, own retail gas and electricity distribution networks to over 40 towns in northern and central Italy, so the gas will be distributed through local retail companies - directly to Italian consumers.

Only last month, Po Valley announced a three year gas offtake contract worth around A$75 million, under which the other half of the total output from the two fields' will be purchased by Italtrading SpA up to September 2012.

The new Elettrogas contract is in the same value range, delivering Po Valley initial forward sales of around A$150 million over the next three years.

Both Castello and Sillaro will be progressively commissioned from July this year, representing Po Valley's first commercial revenue stream from its expanding energy assets in northern Italy.

Castello, near Milan, has an estimated economic reserve life of around 10-12 years while the production profile for Sillaro, near Bologna, extends between 15-20 years on known reserves.

"The secured revenue stream for this important period will enable Po Valley to continue to strengthen its management and technical capacities as field development on other target reservoirs in northern Italy will be continuing at an enhanced level in parallel with the commissioning phase," Mr Masterman said.

Both offtake terms have been negotiated around the ENI Gas Release price formula with different spreads according to the different periods of supply (eg winter, summer).

Today's announcement is the second positive boost this week for Po Valley's strategy to enter the highly lucrative European energy market. The Company earlier in the week announced a private placement of A$10 million to Australian institutional and sophisticated investors.

Part of those proceeds will fund a large-scale appraisal drilling program at the neighbouring Bezzecca gas project together with further work on Castello and Sillaro.

Castello has proven and probable (2P) gas reserves of 6.3 billion cubic feet (bcf) and is expected to have an initial production rate of 2.7 million cubic feet a day when it comes online around July this year.

The Sillaro field has proven and probable (2P) gas reserves of 14 bcf, and is expected to have an initial offtake rate of 3.8 million cubic feet per day when it begins production in September / October.

Elettrogas was founded in 2002 by multi-utility and industrial gas users in the northeast of Italy to take advantage of market liberalisation. The Company, which is 99.45% owned by Soenergy (part of the Soelia Group), packages wholesale gas, storage and transportation services to provide modulated gas supplies to regional Italian gas supply companies.

Elettrogas currently supplies customers on market-competitive terms at 632 delivery points across central and northern Italy. The Company was ranked 14th among gas wholesalers in the Italian market by sales in 2007, with an annual turnover of EUR182 million, rising to EUR244 million last year.