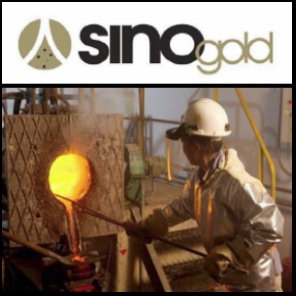 Sino Gold (ASX:SGX) has entered into an option agreement to buy the Caijiagou Gold project in China's northeast Liaoning Province. The vendor and new joint venture partner is a Chinese private company. Following an initial payment of $US300,000, Sino Gold has the option to buy 70 per cent of Caijiagou for $US7.9 million within 12 months, and acquire a further 25 per cent for $US4.4 million within two years.
Sydney, Aug 13, 2009 AEST (ABN Newswire) - US stocks surged overnight as the Federal Reserve said the economy was leveling out, and it left interest rates unchanged at the end of its two-day policy meeting.

The Westpac Melbourne Institute consumer sentiment index increased by 3.7 per cent in August to a level of 113.4, largely due to lifting house prices and relatively low unemployment rates.

The Australian Bureau of Statistics today releases average weekly earnings data for the May quarter. The Housing Industry Association will publish housing affordability report for the June quarter. The Melbourne Institute is to unveil its survey of consumer inflationary expectations for August and survey of consumer unemployment expectations for August.

Mirvac Group (ASX:MGR) confirmed it has had preliminary discussions in relation to a potential offer for Mirvac Real Estate Investment Trust (ASX:MRZ), whom the group has 24.6 per cent direct investment. This is in response to market speculations that Mirvac Group is considering purchasing MRZ and joining it into the group. The move might bolster its direct property portfolio by A$1.3 billion.

Sino Gold (ASX:SGX) has entered into an option agreement to buy the Caijiagou Gold project in China's northeast Liaoning Province. The vendor and new joint venture partner is a Chinese private company. Following an initial payment of $US300,000, Sino Gold has the option to buy 70 per cent of Caijiagou for $US7.9 million within 12 months, and acquire a further 25 per cent for $US4.4 million within two years.

BHP Billiton (ASX:BHP) has recorded a 61.8 per cent fall in profit for the year ended June 30 to $US5.877 billion, down from $US15.39 billion in the previous financial year, after "very challenging market conditions".

Telstra (ASX:TLS) has posted a strong growth of 10.3 per cent in its annual net profit to A$4.073 billion for the year ended June 30, up from A$3.692 billion in the previous year. The company said Telstra is well positioned to face challenges despite it expects the economy to grow slowly in the period ahead.

Singapore Telecommunications Ltd(ASX:SGT) lifted net profit 7.7pc to S$945.4m in the quarter ended June 30 from $S878.1m for the first quarter last year. Optus, owned by Singtel, increased its first quarter profit by 13 per cent as mobile phone revenue boomed with sales of the Apple iPhone and other smart phones.

Coca-Cola Amatil (ASX:CCL) said its first-half profit rose 10.4 percent after good weather led to strong drink sales in the first quarter. The company posted net profit after tax of A$189.8 million in the six months to June 30, 2009.

Leighton Holdings' (ASX:LEI) wholly owned subsidiary Thiess Services, in conjunction with Utility Services Alliance partners, has secured the Capital Works Delivery Program for South East Water, worth A$380 million over the next four years. South East Water is a government-owned entity providing water and sewerage services to over 1.3 million customers in the south-east of Melbourne.

Jetset Travelworld (ASX:JET) booked a net profit of A$15.8 million for the year ended June 30, down 33 per cent on the A$23.5 million it reported in the previous financial year. Jetset said the results were not directly comparable with prior years as it merged with Qantas Holidays and Qantas Business Travel on July 25, 2008.

Biota Holdings Ltd (ASX:BTA) said it would make a return of A$20 million to shareholders, following an extensive review of the cash requirements for growth of the business and the improved trading conditions forecast in the near term. Based on the current number of shares on issue, the cash payment is estimated to equate to approximately 11 cents per share.