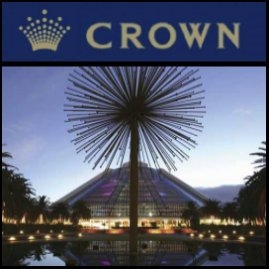 Crown Ltd (ASX:CWN) made a net loss of A$1.197 billion for the year ended June 30, compared to a A$3.546 billion profit in the previous financial year. The result was because of its writing down the value of the US assets due to the global financial crisis. Crown says it plans to focus this year on its Australian and Macau assets.
Sydney, Aug 27, 2009 AEST (ABN Newswire) - US stocks closed nearly unchanged Wednesday despite a stronger than expected increase of new home sales and a jump in durable goods orders. The market responded to the positive data with a shrug, as investors remained cautious and took their profits after rallies.

Australian Bureau of Statistics report showed that the value of construction work fell 0.1 per cent in the quarter to a seasonally adjusted A$35.03 billion. The data showed residential and non-residential building investments dropped 2.6 per cent and 9.5 per cent respectively, but there was an unexpected 5.7 per cent rebound in engineering work, such as on roads and mines.

Sino Gold (ASX:SGX) had received an approach that could lead to a takeover bid. Analysts said Sino Gold's largest shareholder, Canada's Eldorado Gold (TSE:ELD), was probably the bidder and the deal could be worth up to A$2.1 billion.

Perth-based heavy equipment group Emeco Holdings (ASX:EHL) is expected to start talks with an unnamed private equity firm over a possible A$483 million takeover for the group. The talks with the financial investment firm are likely to begin within a week. Emeco yesterday posted a heavy drop in its net profit A$13.3 million after booking A$44.5 million of impairments and restructuring charges, mostly associated with its struggling European business.

Arrow Energy (ASX:AOE) posted a strong rise in full-year profit to A$366.9 million from A$37.2m a year earlier, as Arrow sold 30 per cent of its local and 10 per cent of its international coal seam gas assets to Royal Dutch Shell.

Australian retirement village owner FKP Property Group (ASX:FKP) reported a full-year net loss of A$319.4 million, compared with a profit of A$145.3 million for the same period a year earlier. FKP said it was keeping its distribution guidance under review.

Woolworths (ASX:WOW) reported a 12.8 per cent rise in net profit for the year ended June 28 to A$1.84 billion, up from A$1.63 billion in the previous fiscal year. Woolworths declared a final dividend of 56 cents, and forecasts earnings to grow in the range of 8 per cent to 11 per cent in fiscal 2010.

OZ Minerals (ASX:OZL) reported a loss in the first half of fiscal 2009 of A$585.6 million, compared with a loss of A$500,000 in the prior corresponding period. It was due to a loss in assets sale and lower copper price.

Country Road (ASX:CTY) said net profit for the year ended June 30 was $15.65 million, 60.4 per cent up from $9.76 million in the previous financial year. The retailer also announced the resignation of its chief executive.

IOOF Holdings (ASX:IFL) reported a 32.1 per cent fall in 2008-09 net profit to A$15.84 million in the year to June 30. IOOF plans to sell its life insurance unit after posting the drop in annual profit in its first result since merging with Australian Wealth Management.

Macquarie Telecom Group (ASX:MAQ) has reported an annual net profit of $7.45 million, compared with a loss of $1.165 million in 2007/08. It says profitability is expected to continue on a growth path in the current financial year.

Real estate trust GPT Group (ASX:GPT) has posted a first half loss of A$1.195 billion due to net reduction in valuations of both core and non-core assets, as well as a A$1.08 billion write off in the value of a joint venture with Babcock & Brown. These losses were partially offset by gain on financial instruments of A$606.6 million, GPT said.

Crown Ltd (ASX:CWN) made a net loss of A$1.197 billion for the year ended June 30, compared to a A$3.546 billion profit in the previous financial year. The result was because of its writing down the value of the US assets due to the global financial crisis. Crown says it plans to focus this year on its Australian and Macau assets.