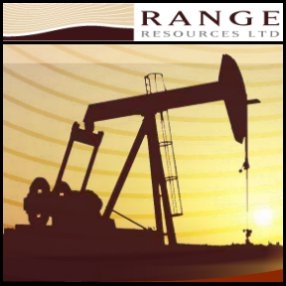 Range Resources (ASX:RRS) continues to enhance its international oil and gas portfolio, reaching agreement with US-based oil and gas company, Crest Resources, to acquire a 25 per cent working interest in the North Chapman Ranch project located in Nueces County, Texas.
Sydney, Sep 21, 2009 AEST (ABN Newswire) - Wall Street Friday climbed to a fresh 2009 high as analysts boosted their growth outlook for the US. The market was inspired after Barclay's Capital raised its forecast for the nation's GDP growth in first three months of next year to five per cent from three per cent. For the week, Dow index posted a gain of 215 points.

Research firm Foreseechange expects advertising spending is unlikely to rebound significantly until the next financial year. In March the ads spending came to its lowest point for a half century. Figures from advertising research firm CEASA also showed expenditure fell by 8.5 per cent across all major media in the first half of this year.

Gunns Limited (ASX:GNS) has submitted a conditional proposal to the liquidator of Timbercorp Limited. The proposal relates to the acquisition of certain forestry assets. Gunns said the proposal is conditional and there is no guarantee that the conditions will be satisfied nor that is proposal will form a basis for completion of a transaction.

Macquarie Airports (ASX:MAP) has received an offer from a group of four individuals, led by businessman Mike Fitzpatrick, to internalise management without paying Macquarie Group Ltd (ASX:MQG) an exit fee of A$345 million. Map's independent board committee consider the proposal then declined, citing the proposal was too risky and likely to trigger debt covenants.

Last week, Horizon Oil (ASX:HZN) and New Guinea Energy (ASX:NGE) completed the farm-out of interests in their respective gas prospects in Papua New Guinea to Talisman (TSE:TLM), the Canadian company that has made increased acquisitions in PNG, including Rifts Oils holdings.

Rio Tinto Ltd. (ASX:RIO) said it remains cautious about the short-term outlook for the aluminum market and that cash preservation remains a key priority for its aluminum business. Rio Tinto Alcan said the long-term story for aluminum remains attractive with annual demand growth expected to be 4%-6% through economic cycles.

Qantas Airways (ASX:QAN) says it is yet to see substantial improvements in underlying business conditions as there was significant uncertainty surrounding an economic recovery. Qantas group said it was well positioned to withstand the economic downturn and seize opportunities during a recovery.

Newmont Mining Corporation (ASX:NEM) has realised aggregate net proceeds of about $US1.966bn, after deducting estimated discounts and expenses, on the closing of its public offering of senior notes.