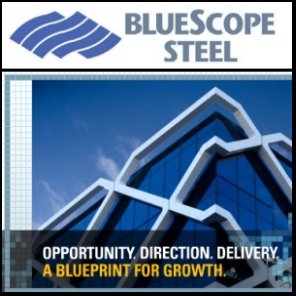 BlueScope Steel (ASX:BSL) will ramp up its Port Kembla steelworks to full capacity this quarter on the back of strong export and domestic demand after running it at a reduced rate for most of the year. The steel mill is expected to run at full capacity of 5.3 million tonnes a year in the second quarter of the financial year.
Sydney, Oct 2, 2009 AEST (ABN Newswire) - Overnight the Dow index and S&P's 500 index posted their biggest falls in three months as the worse-than-expected manufacturing activity data in September and new jobless claims led to a broad sell-off. These figures overshadowed improvements in pending home sales, personal spending and construction spending, and dampened investors confidence on the economy recovery.

Australia could be the only advanced economy expected to grow this year. The International Monetary Fund (IMF) has raised its forecasts for economic growth in Australia and predicted the unemployment rate will peak at 7 per cent next year. The IMF increased its 2009 forecast for Australian GDP to growth of 0.7 per cent, from its previous estimate for a contraction of 0.5 per cent.

The board of PearlStreet Limited (ASX:PST) has rejected a proposed A$42.1 million cash takeover bid by Campbell Brothers (ASX:CPB), but threw its support behind a recapitalisation plan by private equity group Catalyst Investment Managers. Catalyst would invest A$23 million in PearlStreet for a stake in PearlStreet of at least 46 per cent and up to 63 per cent. The PearlStreet board said the Catalyst recapitalisation proposal provides a better outcome for its shareholders.

NextEra Energy Resources, a unit of US electricity service provider FPL Group Inc (NYSE:FPL), said it agreed to buy three wind projects from Babcock & Brown Power (ASX:BBP) for about US$352 million. The three projects, located in Texas, Wisconsin and South Dakota, have a combined capacity of 184.5 megawatts.

International beverage alcohol producer Constellation Brands Inc (ASX:CBR) reported a net income of US$106.2 milliion for the half ended August 31 2009 compared with US$21.9 million in the prior corresponding half, helped by sales to new distributors. The company maintained its fiscal year forecast as it works to slash costs and boost growth.

It is reported that Babcock & Brown Infrastructure Group (ASX:BBI) plans a capital raising of up to A$650 million. BBI will rename itself Prime Infrastructure and will make an equity raising as part of a deal with Canadian fund manager Brookfield Asset Management (NYSE:BAM) to reduce debt.

BlueScope Steel (ASX:BSL) will ramp up its Port Kembla steelworks to full capacity this quarter on the back of strong export and domestic demand after running it at a reduced rate for most of the year. The steel mill is expected to run at full capacity of 5.3 million tonnes a year in the second quarter of the financial year.

Goodman Fielder Limited (ASX:GFF) said it had successfully raised A$500 million from the syndication of its multi-currency, revolving loan facility. The facility was oversubscribed and effectively extends the maturity of the majority of its existing A$700 million syndicated loan facility, originally due to mature in November 2010, by an additional two years.

Panaust (ASX:PNA) said it has discovered a high-grade gold-silver mineralised zone in the southwest of the Ban Houayxai deposit in Laos, identifying a potential for extensions to the deposit through an area that has previously been subject to only a limited amount of drilling.