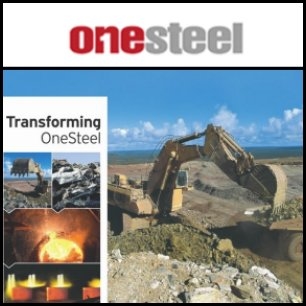 Onesteel (ASX:OST) chief executive Geoff Plummer said the company is on track to achieve iron ore sales of six million tonnes this fiscal year. The steel maker has converted its Whyalla Steelworks, in South Australia, to use magnetite ore rather than hematite ore, so has been able to expand its hematite ore sales.
Sydney, Oct 6, 2009 AEST (ABN Newswire) - US shares rebounded on Monday after a losing week hit by a series of disappointing economic reports. The market gained as Goldman Sachs recommended large banks and a report showed service industries returned to growth after 11 months of contraction.

The Australian market finished lower yesterday led by bank stocks in choppy trade ahead of the Reserve Bank's interest rate decision on Tuesday. The benchmark S&P/ASX200 index lost 28.4 points, or 0.62 per cent, to 4573.3 points, while the broader All Ordinaries index shed 26.8 points, or 0.58 per cent, to 4579.3 points.

Economists expected that the Reserve Bank of Australia (RBA) will lift the official cash rate by 25 basis points when it meets in Sydney. Positive retail sales and jobs data have added to the view that Australia has weathered the global recession better than most.

The ANZ Bank's report of strong growth in job ads also fuelled speculation that the RBA today could start rolling out the interest rate rises it has been flagging for several months. The number of jobs advertised in newspapers and on the internet rose 4.4 per cent in September.

Today the board of the RBA holds its monthly meeting to consider its position on official interest rates. The Australian Chamber of Commerce and Industry survey of investor confidence is due. The Federal Chamber of Automotive Industries new vehicle sales data for September and the Australian Bureau of Statistics international trade data for August also are due.

GrainCorp (ASX:GNC) plans to buy the world's fourth-largest commercial malt manufacturer United Malt Holdings for A$757 million. The acquisition will transform GrainCorp into an international agribusiness with operations in Australia, the United States, Canada and the United Kingdom. Graincorp shares went into a trading halt earlier today pending the announcement of the deal and a related capital raising.

Lion-Asia Resources Pte Ltd is to make an off-market cash takeover bid for Polaris Metals NL (ASX:POL) at A$0.60 a share. Lion's offer represents a 19 per cent premium to the implied value of the offer for Polaris announced by Mineral Resources Ltd (ASX:MIN) on August 20.

The federal government approved a A$1.76 billion takeover of Sino Gold Mining Ltd. (ASX:SGX) by Canada's Eldorado Gold Corp (TSE:ELD). Eldorado, which bought a 20% stake in Sino Gold last month, is offering 0.55 share for every Sino share in a deal that values Sino Gold at A$2.2 billion.

Cue Energy (ASX:CUE) said PetroChina (SHA:601857) has purchased Singapore Petroleum Company (SPC), which has 16.31 per cent shareholding in Cue. PetroChina has become a major shareholder in Cue through its US$2.2 billion acquisition of SPC. As well as its stake in Cue, PetroChina has also acquired SPC's 35 per cent interest in a Bass Strait oil and gas plot operated by Tap Oil.

The securities of Brambles (ASX:BXB) have been placed in trading halt, pending an announcement by the company. The trading halt will remain in place until the earlier of the commencement of normal trading on Thursday, October 8, or when the announcement is released to the market.

Onesteel (ASX:OST) chief executive Geoff Plummer said the company is on track to achieve iron ore sales of six million tonnes this fiscal year. The steel maker has converted its Whyalla Steelworks, in South Australia, to use magnetite ore rather than hematite ore, so has been able to expand its hematite ore sales. 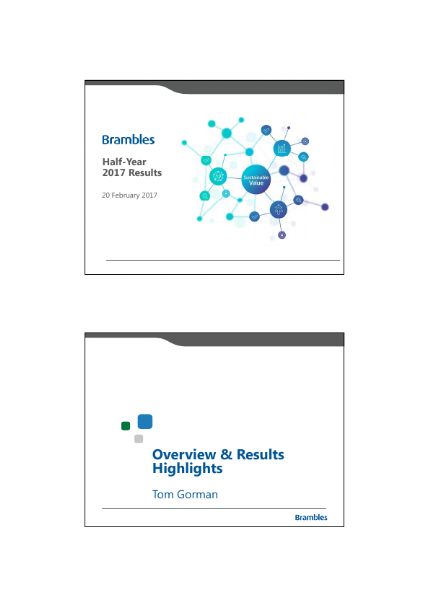