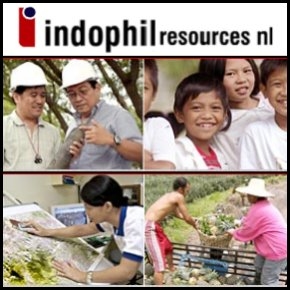 Indophil Resources (ASX:IRN) said it is in advanced talks over the possible sale of its 34.2 per cent stake in the Tampakan copper-gold project in the Philippines. Indophil said a range of parties had recently visited the site and discussions on a potential sale were at an ''advanced stage''. Tampakan's majority owner Xstrata PLC (LON:XTA) has announced a new measured, indicated and inferred resource of 2.4 billion metric tons at the project and expects the first-stage capital expenditure for its development to be US$5.2 billion.
Sydney, Oct 21, 2009 AEST (ABN Newswire) - Wall Street declined overnight on a weak housing report, despite some strong earnings results. The Commerce Department said that construction starts on privately owned homes rose 0.5 per cent to 590,000, lower than expectations.

The Australian share market has opened lower this morning after the weak lead from Wall Street. Yesterday the local market posted a solid gain as commodities prices were higher. The benchmark S&P/ASX200 index surged 53.4 points, or 1.11 per cent, at 4846.2 points, while the broader All Ordinaries index climbed 51 points, or 1.06 per cent, to 4852.8 points.

Inflation will be an inevitable public policy challenge once the economy recovers, Australian Finance Minister Lindsay Tanner says. In the minutes of the Reserve Bank's October policy meeting, the RBA said rising concerns about inflation triggered its decision to raise rates by 0.25 percentage point to 3.25% this month. With third-quarter inflation data due out next week, some analysts expect elevated inflation fears may warrant a 0.50 percentage point increase at the RBA's Nov. 3 policy meeting. The RBA will issue revised growth and inflation forecasts on Nov. 6.

Today the Australian Bureau of Statistics is to release new motor vehicles sales data for September. The Westpac-Melbourne Institute Indexes of Economic Activity for August is due.

Metal Storm (ASX:MST) says it has reached agreement with an overseas investor regarding the terms of an equity investment in the company. It asked for the trading halt to allow time for the payment to be received, because of the differing time zones between Australia and the investor's country of origin. It is expected the latest deal could involve an equity placement and debt issue worth more than $US25 million.

Indophil Resources (ASX:IRN) said it is in advanced talks over the possible sale of its 34.2 per cent stake in the Tampakan copper-gold project in the Philippines. Indophil said a range of parties had recently visited the site and discussions on a potential sale were at an ''advanced stage''. Tampakan's majority owner Xstrata PLC (LON:XTA) has announced a new measured, indicated and inferred resource of 2.4 billion metric tons at the project and expects the first-stage capital expenditure for its development to be US$5.2 billion.

Spotless Group Ltd. (ASX:SPT) said it is extending the closing date of its takeover offer for New Zealand dry-cleaning concern Taylors Group Ltd. (NZE:TAY) by one week. Spotless, which currently owns 66% of Taylors, is offering NZ$2.25 a share for all of the shares in Taylors it doesn't already own. It said the offer won't be extended beyond this date and the offer period is final. The independent directors of Taylors have unanimously recommended that shareholders accept the offer.

BHP Billiton (ASX:BHP) said today its first quarter iron ore production rose 1 per cent on year to a record 30.1 million tonnes. Iron ore output rose 11 per cent on the fourth quarter of fiscal 2009. The miner said it has forced it to declare force majeure on copper and uranium sales from its Olympic Dam operation in South Australia due to an October 6 accident. BHP said damage to the main haulage system at Olympic Dam meant ore was expected to be hoisted at about 25 per cent of capacity until full production resumes in the third quarter.

Australian Pharmaceutical Industries (ASX:API) today reported stronger than expected results for the year ended 31 August 2009. Its net profit after tax rose 22.3 per cent to A$18.6 million, compared to A$15.2 million in corresponding period a year ago. API also said it will raise approximately A$150 million in new equity, including A$112 million via a 2-for-3 accelerated pro rata non-renounceable entitlement offer and A$38 million via a placement to institutional investors. Washington H Soul Pattinson & Co Ltd (ASX:SOL), API's largest shareholder with around 25 per cent, has committed to take up its pro rata share of the entitlement offer and the placement.

Macquarie Airports (ASX:MAP) reported a 4.9 per cent rise in traffic at Sydney to 2.79 million, up from 2.65 million a year earlier. International traffic was up 7.3 per cent, while domestic and regional traffic rose 4.2 per cent.

Property developer Stockland Group (ASX:SGP) says it remains on track to achieve our full-year 2010 guidance of 28 earnings per security, assuming no material decline in market conditions. Stockland's 2009 earnings were 38.8 per security. There were significant downward revaluations in its commercial property portfolio, but the company said there are growing signs that it is near the end of this cycle.