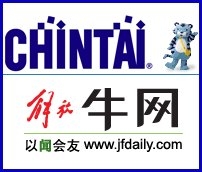 Chintai Corp. (NJM:2420) plans to expand its Chinese operations by teaming up with the Shanghai-based Jiefang Daily
Sydney, Jan 7, 2010 AEST (ABN Newswire) - US markets closed flat overnight after a report of private-sector job losses and Federal Reserve minutes showing concern about weakness in the labour market. Asian stocks ended mostly higher Wednesday as investors were still in an upbeat mood, but China's Shanghai Composite index was 0.9 per cent lower due to worries over inflation and a possible fund raising by Bank of China.

Japan-based real estate information provider Chintai Corp. (NJM:2420) plans to expand its Chinese operations by teaming up with the Shanghai-based Jiefang Daily group to offer property information via a free paper this month. And each Friday, the Japanese firm will also issue a roughly 16-page paper with advertising from leading real estate firms and brokers. Chintai expects to generate sales 300 million yen there in the year ending October 2011.

TYO:9613) plans to transfer some of its back-office operations, including data input, to a group firm in Wuxi, China, as part of an effort to cut costs. The new department is to first handle simple tasks, such as calculating travel expenses and salaries. It is to eventually take on more complicated work such as accounting, human resources and purchasing.

NASDAQ:BIDU) said it plans to start a new online video channel that will provide copyrighted content to Chinese Internet users with content including movies, TV series, sporting events and animation. The company will form a new independent company that will derive its revenue from advertising and work with content providers to offer licensed video content.

HKG:0016), Asia's largest developer by market value, plans to refinance five-year loans worth up to HK$12.6 billion, said sources. The structure of the company's refinancing would be 70 percent revolving credit and 30 percent term loan.

LON:PRU) for S$428 million. UOB's bancassurance operations in Singapore, Indonesia and Thailand will distribute Prudential's life, accident and health insurance products for at least 12 years. UOB has 414 branches in the three markets.

SEO:005930) fell on Thursday after the company released its earnings guidance. It is expected to post a consolidated operating profit median of 3.7 trillion won in the October-December period of last year. Fourth-quarter consolidated sales are estimated at 39 trillion won, the company said.