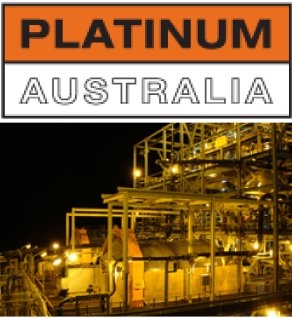 Platinum Australia Ltd (ASX:PLA) has entered an agreement with Japan Oil, Gas and Metals National Corporation (JOGMEC)
Sydney, Jan 11, 2010 AEST (ABN Newswire) - Australian share market ended the first week of 2010 with a 15-month high as banking shares rebounded on Friday from the falls in previous session, offsetting losses in resources sector. At the close, the benchmark S&P/ASX200 index rose 12.7 points, or 0.3 per cent, to 4912.1, while the broader All Ordinaries index advanced 11.7 points, or 0.2 per cent, to 4942.2.

ASX:CBH) shares was placed in trading halt on Friday amid speculation the miner could announce a takeover offer. CBH's share price surged sharply after it said it was in confidential talks about transactions focused on generating shareholder value. It was reported that Belgium-listed zinc producers Nyrstar NV (EBR:NYR) may acquire CBH. The company would remain in trading halt until the commencement of normal trading on Tuesday next week or after an announcement is made to the market.

ASX:PLA) has entered an agreement with Japan Oil, Gas and Metals National Corporation (JOGMEC) under which JOGMEC will earn an initial 35 per cent interest in the Stellex North Project by providing US$3.5 million funding for exploration over the next four years. The balance of the project will be held by Stellex Platinum (Pty) Ltd, a joint venture company currently owned 49 per cent by PLA and 51 per cent by Batsalani Mining & Resources (Pty) Ltd.

ASX:NCM) said its wholly owned subsidiary, Cadia Holdings Pty Limited, has received planning approval for its proposed Cadia East project near Orange. The estimated capital coast of the project, which will be the largest underground mine in Australia, is expected to be nearly A$2 billion. The project is now expected to be considered by the Newcrest board around the end of the first quarter in 2010 after remaining regulatory approvals have been finalised, the company said.

ASX:RIO) to China's sovereign wealth fund, China Investment Corp (CIC), said sources. It was speculated that CIC is weighing a bid for the 9.3% stake in the Rio Tinto group.