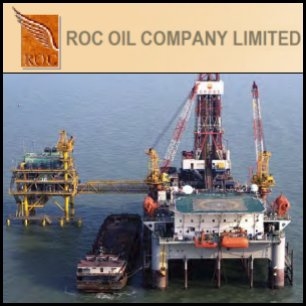 Roc Oil ( ASX:ROC) expects its average annual production rate in 2009 to be about 10,000 barrels of oil equivalent a day. Roc Oil advises that the average daily Zhao Dong production rate for 2H 2009 is expected to be approximately 18,900 BOPD.
Sydney, Jan 14, 2010 AEST (ABN Newswire) - The Australian share market declined on Wednesday as miners were lowered on China's move to tighten monetary policy, which hit commodities prices. At the close, the benchmark S&P/ASX200 index fell 31.4 points, or 0.6 per cent, at 4868.1, while the broader All Ordinaries index retreated 31.5 points, or 0.6 per cent, to 4900.1.

On Thursday the Australian Bureau of Statistics is due to release the employment change and unemployment rate for December. National Australia Bank releases its business confidence survey for December.

ASX:MDA) said that a number of preconditions have not been satisfied and it will not to proceed with the acquisition of a stake in Orchard Petroleum as per its non-binding agreement. In line with the recent appointments of two new directors and the focus on becoming a junior producer in the oil & gas segment the company intends to focus on the development of this strategy, said Modena Resources.

ASX:CAZ) on Wednesday announced a positive results of a Pre-Feasibility Study into the development of its 100 per cent owned Parker Range project in WA. The company said it has commenced discussions with several potential strategic partners including both significant trading houses and customers regarding advancement of the project. Cazaly says it is on the hunt for a strategic Asian partner but would prefer an investment in the junior explorer at the project level, rather than an equity stake.

ASX:ERA) said its fourth quarter uranium output fell 30% from a year earlier due to lower grades at its Ranger mine in Australia's Northern Territory. The fourth quarter output was below market expectations, largely due to the lower average ore grade processed during the quarter. ERA expects lower average head grades to continue in the first half of 2010 before an improvement in grades in the second half. The company, which shipped its first uranium to China in 2008, said it is continuing to sell ore to China.

ASX:ROC) expects its average annual production rate in 2009 to be about 10,000 barrels of oil equivalent a day. Roc Oil advises that the average daily Zhao Dong production rate for 2H 2009 is expected to be approximately 18,900 BOPD. Roc Oil, which is partnering with PetroChina (

HKG:0857), is the operator of the Zhao Dong project. At the Zhao Dong field off the coast of China, the company said production in December had been at an average rate of about 9,130 barrels of oil a day due to maintenance and repairs to a failed sub-sea power cable.