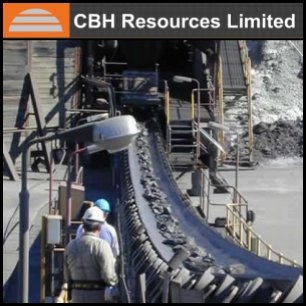 CBH Resources Ltd. (ASX:CBH) said Thursday that it has entered into a A$67.5 million joint venture agreement with major shareholder Japan's Toho Zinc Co. (TYO:5707).
Sydney, Jan 21, 2010 AEST (ABN Newswire) - Australian sharemarket dropped on Thursday due to concerns that China's bank lending halt may hit the global economy recovery. Chinese government data showed that GDP increased by 8.7 per cent in 2009 but inflation surged towards the end of the year. The results fuelled the expectations that China will introduce more measures to slow inflation. At the close on Thursday, the benchmark S&P/ASX200 index was down 41 points, or 0.8 per cent, at 4827.2, while the broader All Ordinaries index lost 45.8 points, or 0.9 per cent, to 4849.6.

ASX:CBH) said Thursday that it has entered into a A$67.5 million joint venture agreement with major shareholder Japan's Toho Zinc Co. (

TYO:5707), declaring the deal superior to a takeover offer by Belgium's Nyrstar SA (EBR:NYR) made earlier this month. Under the terms of the deal, CBH has agreed to sell a 50 per cent stake in its lead-zinc Rasp project at the Broken Hill mine for A$57.5 million. CBH will also raise A$10 million through a share placement to Toho, at 20 cents a share, a 48 per cnet premium over CBH's last closing price.

ASX:TCM) to 30 per cent. Qinfa holds its current 21 per cent interest in Tiaro through its subsidiary. In December 2009, with shareholder approval, Qinfa Group acquired 13.4 million shares in Tiaro to support the development of coal interests and to establish a JORC compliant resource of high quality metallurgical coal enabling the Qinfa Group to participate in off take of future potential mine production.

ASX:AXA) said its 2009 profit was likely to exceed analysts' current forecasts. AXA APH said net profit after non-recurring items was expected to be about A$675 million for the year ended December 31, up from a loss of A$278.7 million in 2008 and beating analyst expectations.

ASX:STO) maintained its 2009 production guidance, but said sales revenue was hit by lower oil prices. The company said 2009 sales revenue of A$2.181 billion was 21 per cent lower than 2008 primarily due to lower international oil prices.

ASX:FMG) reported that the company shipped 9.08 million tonnes of iron ore in the fourth quarter, down from 9.526 million tonnes in the September quarter. The company also says it is seeking broadening its customer base and expand outside of China. ''It also remains a possibility that, as per the previous contract year, there will not be a benchmark agreed for China in the next contract year,'' the miner said.

ASX:OZL) has exceeded its full-year copper and gold production guidance, and indicated the mine should continue to operate above nameplate capacity during 2010. Copper production for the fourth quarter was 36,497 tonnes, taking the full-year figure to 96,310 tonnes. The company also indicated that it is continuing to search for new acquisition opportunities.

ASX:NMS) said earnings for the first half of FY2010 will be well below that of the previous corresponding period, largely due to a sharper than anticipated decline across both the US and South East Asian markets during the period. The company expects that normalised net profit after tax for first half 2010 will be in the range of breakeven to a loss of A$1 million. But Neptune said it is confident of a strong turnaround in profit and earnings for the second half of FY2010 and into FY2011.