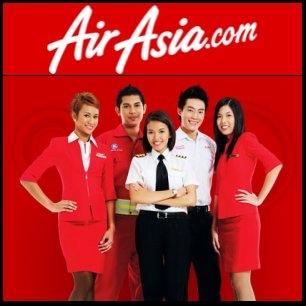 Most asian markets were higher on hope of a rescue package for Greece yesterday. Japan's Nikkei index ended up 0.3%, and Hong Kong's Hang Seng Index added 0.7%. Both China's Shanghai Composite and Taiwan's Taiex climbed 1.1%. Japanese market is closed on Thursday for National Foundation Day, while Taiwan market is closed for Pre-Chinese New Year.

NYSE:TSM) said Wednesday it will upgrade the process technology at its plant in Shanghai, shortly after the island's government eased China-bound investment. TSMC will also apply to buy the 10 per cent stake offered by China's Semiconductor Manufacturing International Corp. (

HKG:0981) as part of the settlement for a legal dispute.

TPE:2409), the third-largest flat-panel maker by revenue, will apply to build a 7.5-generation flat-panel plant in China, a spokeswoman said Wednesday, shortly after the Taiwan's government eased China-bound investment.

KUL:AIRASIA) has signed a joint venture agreement to operate a low-cost airline in Vietnam. It will buy a 30% stake in Vietjet Aviation Joint Stock Co. for VND180 billion. "Vietnam will be a gateway which connects the travel markets of Asean with mainland China and potentially the regions of South Asia, North and East Asia including possibly Japan, Korea and Taiwan," AirAsia said.

HKG:0753) has agreed to buy 20 A320 aircraft from Airbus with a list value of US$1.63 billion. The transaction will mainly support hubs-building in Chengdu and expand the fleet capacity of the company in south western China while supplementing, to an appropriate extent, the flights in eastern China. The aircraft will be delivered between 2011 and 2014.

SEO:047050) said yesterday it will stretch its business to agricultural resource development to seek growth and help reduce Korea's reliance on imported grain. The company has set up a new unit to secure overseas farming resources by maximizing the company's global network and human resources, Daewoo International said in a statement.