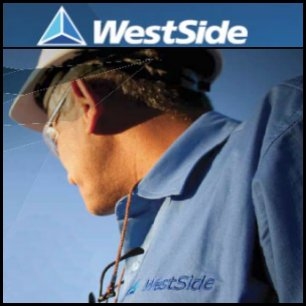 Brisbane, Feb 24, 2010 AEST (ABN Newswire) - Your Directors present their report on the Consolidated Entity (referred to hereafter as the Group) consisting of WestSide Corporation Limited (

ASX:WCL) Half Yearly Accounts and the entities it controlled at the end of, or during, the half-year ended 31 December 2009.

The following persons were Directors of WestSide Corporation Limited during the whole half-year and up to the date of this report:

- Announced the proposed Company-transforming acquisition of the producing Dawson Seamgas gas fields and two adjacent exploration tenements in the Bowen Basin, subject to satisfaction of various conditions and resolution of participation and pre-emptive rights;

- Drilled three exploration wells at the Tilbrook pilot in ATP 688P, marking the completion of the commissioning of a new drilling rig;

- The Company's first horizontal test well was brought on-line for testing, flowing gas at up to 340,000 standard cubic feet (Scfd) in the first three months of testing;

- Received shareholder approval to proceed with the acquisition of two new exploration tenements covering over 14,000 km2 in the Galilee Basin; and

- Subsequent to the end of the half year, completed drilling the Mount Saint Martin (MSM) #3 well, identifying new coal seams which could significantly increase the Company's CSG resource in this area of ATP 688P.

WestSide has significantly increased the CSG reserves targets for the Company's 2009 / 2010 program after recent results from its drilling and appraisal works provided confidence for the expanded campaign.

The Company is now targeting up to 111 Petajoules (PJ) of Proved and Probable (2P) gas reserves and up to 1,710 PJ of Proved, Probable and Possible (3P) reserves in the Bowen and Galilee Basins, building on previously certified gas reserves.
(1)The certified reserves figures used in this report are based on information compiled by John P. Seidle, Ph.D., P.E.,Vice President of MHA Petroleum Consultants LLC. Mr Seidle is not an employee of WestSide Corporation Ltd and consents to the inclusion in this report of these reserves figures in the form and context in which they appear.

In November, 10km of dynamite seismic was conducted at Paranui to confirm the geological structure of the target area.

Results are being processed and will be used to plan the location of new wells.

A new core well is planned to the west of the Paranui pilot to assess the gas resource at depths greater than the 1,000m depth currently addressed by the pilot. The ability to access gas from coals deeper than 1,000m could add significantly to WestSide's current 3P gas reserves.

New wells are proposed to expand the existing pilot, while two existing pilot wells could be stimulated or cavitated to increase production rates.

The new wells will aim to confirm the geological structure and to convert some of the existing 3P gas reserves into 2P reserves to support an application for a Petroleum Lease in 2010.

Production testing of the Tilbrook #8 dual-lateral well commenced in July and continued during the period. The well recorded gas flow rates as high as 340,000 standard cubic feet per day and 400 barrels of water per day before the well was blocked, providing confidence that commercial flow rates can be achieved from the field from this style of completion. Attempts to clear the blockage were unsuccessful with reservoir modelling continuing using data accumulated during production testing.

During the half year, WestSide drilled three wells in preparation for new lateral wells to expand the Tilbrook pilot. The Tilbrook #9a exploration well and Tilbrook #9 vertical appraisal well intersected 9 metres and 10 metres of net coal respectively. The Tilbrook #10b exploration well encountered 3 metres of net coal after adjustments for the impact of localised intrusions. The drilling rig will return to complete the program after drilling wells in the Mount Saint Martin area.
The planned horizontal wells will target commercial gas flow rates to underpin certification of 2P gas reserves at the pilot.

An extended production test of the current appraisal wells, Tilbrook #8 and Tilbrook #7, is planned to continue for several months.

Seismic data was acquired in October over 5 km and is being analysed to confirm the coal structure for horizontal drilling and pilot expansion.

In response to promising gas content and saturation data from the MSM #1 well, WestSide plans to drill several new wells in the region to further define the gas resource.

The first of the new wells (MSM #3) was drilled in January 2010 and encountered 27 metres of coal - significantly more than the 9 metres intersected by the MSM #1 core well. The well identified additional, deeper coal seams that could significantly increase the Company's CSG resource in the area. Initial results from drill stem tests indicate low permeability in the seams at this site. Gas contents and permeability of the new seams will be tested in future wells.

New exploratory chip and core holes will be drilled to confirm the lateral extension of the target coal seams and appraise the gas contents over the wider area to extend the 3P reserves position.

Seismic data was acquired over 5 km in October and will be analysed to confirm the geological structure for potential future horizontal drilling.

WestSide has secured a significant foothold in Queensland's coal-rich Galilee Basin under an agreement to acquire two petroleum exploration tenements, which WestSide believes could contain up to 21 trillion cubic feet of gas in place.

The Company will target CSG at the two pending exploration tenements, ATP 974P and ATP 978P, which cover a combined area of 14,480 km2 in the north-western part of the Galilee Basin.

Following the issue of the permits and completion of the acquisition, WestSide will conduct geological, geophysical and other engineering studies at the two tenements as a precursor to exploratory drilling in late 2010.

WestSide completed commissioning of a new Schramm TXD drilling rig with the drilling of the Tilbrook #9a well commencing in October. The Schramm TXD 180 rig is one of the largest dedicated CSG rigs in Australia.

The Schramm rig is expected to allow WestSide greater control over its programs and will be a valuable resource as the Company moves into its next phase of exploration and appraisal.

The rig is operated by international drilling contractor, Boart Longyear and will be available for use by other industry participants at commercial rates when the rig is not in use on WestSide's projects.

Proposed acquisition of Dawson Seamgas gas fields WestSide has entered a conditional agreement to acquire Anglo American's (Anglo) stake in the Dawson Seamgas CSG assets, and potentially, Mitsui Moura Investment Pty Ltd's (Mitsui) interest in those assets. The proposed acquisition would result in WestSide acquiring a stake of up to 100% in the producing Dawson Seamgas CSG fields (PL 94 and ML gas rights) and up to 50% in two adjoining tenements (ATP 602P and ATP 564P/ PL94 North sublease). The ultimate interests acquired will be determined following resolution of pre-emptive and other rights of participation held by the existing joint venture partners.

The transaction presents WestSide with a significant opportunity for further value creation through consolidation with the adjoining Paranui prospect. The Dawson Seamgas pipeline infrastructure has spare capacity to accommodate gas from both the Dawson Seamgas fields and from Paranui.

WestSide proposes to invest in the field to increase current production rates to meet contracted rates. WestSide also believes there are significant resources yet to be certified which have the potential to increase the 2P and 3P reserves and also to convert 3P into 2P. Co-development agreements with the coal mining lease holders (Anglo and Mitsui) will enable WestSide to extract and sell CSG from within the mining and petroleum areas. Compensation is payable to WestSide if coal mining activities impact on WestSide's gas activities.

If successful, this transaction has the potential to transform WestSide from an explorer-only business to a significant CSG producer, with sales contracts in place and a portfolio of exploration projects in various stages of development.

WestSide's total acquisition cost is expected to be between A$55 million and A$80 million, depending on the ultimate ownership interest acquired, with a proportional reduction of WestSide's investment if WestSide seeks to work with a joint venture partner.

The transaction is subject to obtaining the necessary financing, which will be finalised once there is further certainty over the size of the ultimate interests to be acquired. If the Company cannot source sufficient funds to settle the acquisition, then it is not obliged to proceed with the transaction Further clarity around the transaction size, structure and WestSide's financial commitment will be provided following resolution of the various pre-emptive rights. The resolution of all the various pre-emptive rights may not be finalised until early April 2010.

WestSide is awaiting confirmation of its interests in recently-awarded CSG permits in Indonesia from Bumi Resources. Result for the period The operating loss after income tax for the Group amounted to A$2,029,718 (2008 : A$1,708,496).

A copy of the auditor's independence declaration as required under section 307C of the Corporations Act 2001 is set out on page 5 (see link at bottom of release).

The Company is of a kind referred to in Class Order 98/100, issued by the Australian Securities and Investments Commission, relating to the ''rounding off'' of amounts in the directors' report. Amounts in the directors' report have been rounded off in accordance with that Class Order to the nearest thousand dollars, or in certain cases, to the nearest dollar.

This report is made in accordance with a resolution of Directors.

For the complete WestSide Corporation Half Yearly Accounts, please click the link below: