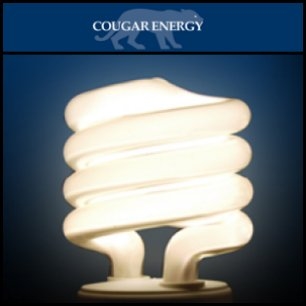 ASX:CXY) is pleased to report a significant milestone in the development of Australia's Underground Coal Gasification (UCG) industry with the successful ignition of the Kunioon coal seam at the Company's flagship Kingaroy plant in central Queensland.

The production of syngas has started. It is being processed by the Company's gas processing plant on site and the main flare has been ignited at 11.37 pm last evening.

Having achieved successful ignition using air injection, Cougar Energy staff and the Company's technology partners (Ergo Exergy Technologies Inc., led by Dr Michael Blinderman, currently on site) will ramp the gasification process up over the coming weeks, prior to the undertaking of a series of trials to test both underground and surface operations under a range of conditions.

Extensive data will be collected over a minimum period of six months for inclusion in the pre-feasibility study currently being prepared by Cougar staff, and for the bank feasibility study which will follow.

The Company is investigating the economics of utilising small scale plant to take gas from the project in this pre-production phase to generate power to run the site. In addition, an assessment is being made of the economic returns of various power production scenarios for the 200 MW Stage 1, with the advantage of generating cash flows earlier than previously planned.

This ignition represents the second successful initiation of a UCG project in Australia by Dr Len Walker, Managing Director & CEO of Cougar Energy and Dr Michael Blinderman of Ergo ExergyTechnologies, following on from the pre-production burn at Chinchilla in Queensland from 1999-2002.

"This is another most important milestone achievement for Cougar Energy as we go forward to building our commercial scale UCG gas production facility and dedicated electricity generation plant at Kingaroy," said Dr Len Walker.

"The project has been constructed on time and on budget and is further positive testament to our selection of the world-leading UCG technology process and know-how of our partners Ergo Exergy Technologies," Dr Walker said.

"I look forward with great anticipation and excitement as our skilled Kingaroy project team moves towards our next milestones - finalisation of the pre-feasibility and bank feasibility studies."

A further release will be made to the market in the near future with a summary of the performance of the UCG process as well as the Kingaroy Plant.