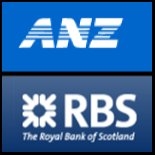 Australia and New Zealand Banking Group (ASX:ANZ) said today that it had completed the acquisition of The Royal Bank of Scotland's (LON:RBS) retail and commercial business in Hong Kong.
Sydney, Mar 22, 2010 AEST (ABN Newswire) - Asian shares are set for a weak start on Monday after US markets fell on lower commodities prices and Greek debt concerns. Japanese market today is closed for Vernal Equinox Day. Most Asian markets gained on Friday. Japan's Nikkei index rose 0.8 per cent while weakness in yen boosted exporters. China's Shanghai Composite was also higher, with Alunimium Corp of China surged 10 per cent on Friday. Hong Kong's Hang Seng Index was up 0.2 per cent and South Korea's Kospi climbed 0.7 per cent.

TYO:8766) said it will step up overseas expansion to solidify its position in industrial countries that account for most of the global insurance market, while Japan's nonlife insurance market is shrinking. Mitsui Sumitomo Insurance (

TYO:8759) will integrate into Japan's largest nonlife insurance group in terms of net premium revenues, overtaking Tokio Marine. Tokio Marine will continue to invest in Asian and Latin American emerging markets that are expected to sharply grow in the future. The company is also planning to expand its Islamic insurance operations.

SEO:053000), said yesterday its Chinese unit has become the first Korean bank to receive a license from Chinese authorities to settle trade transactions in yuan. The license would allow the bank to settle transactions for Korean and other foreign companies that trade with Chinese firms.

ASX:ANZ) said today that it had completed the acquisition of The Royal Bank of Scotland's (

LON:RBS) retail and commercial business in Hong Kong. ANZ has launched a new service to meet the needs of affluent retail customers, ANZ Signature Priority Banking, which it will roll out across Asia Pacific over the next 18 months. ANZ's Chief Executive for Asia Pacific, Europe and America Alex Thursby said ANZ will also be focusing on growing its commercial banking business in Hong Kong.

TPE:3702), the largest distributor of semiconductor components in Asia, has agreed to buy another electronics distributor, Yosun Industrial Corp.(

TPE:2403). The acquisition, valued at about 17.8 billion new Taiwan dollar, is aimed at boosting WPG's global market share and competitiveness and will be carried out through a share swap. WPG is expected to increase its market share in Asia to 29 per cent from 18 per cent, and challenge the No. 1 position in global market.

The Board of Arrow Energy Limited (

HKG:0857) with cash of A$4.7 per share, after the two bidders raised their offer. On March 8, the company received an initial offer of A$4.45 a share, or A$3.3 billion, plus a one-for-one share in Arrow's offshore operations.