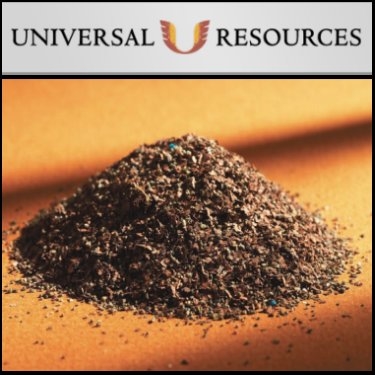 Under an Agreement dated 11 March 2005 Mt Isa Mines (Xstrata) may earn 51% of an area beneath and around the large copper resources at Roseby by expending A$15 million or completing a Detailed Feasibility Study by 30 June 2012. Xstrata have advised their expenditure to 28 February 2010 is A$7.5 million.

Grades are relatively uniform and the large intercepts are not the result of individual high grades averaged over great widths.

Universal's Managing Director, Dr Alistair Cowden, said a major driver for the recently completed merger between Vulcan and Universal was the belief that Roseby was an under-appreciated copper asset with potential to become one of the larger copper deposits in Australia.

"This drilling is a very exciting demonstration of that potential," he said.

"The merger brings Vulcan's cash and near-term earnings potential in Finland to bear on what we believe can be a much larger project."

A key result from today's news is drillhole BCD859, shown on the diagram below. The cross section illustrates the potential for expanding the current Resources and Reserves through both the application of lower cut-off grades and also the potential additional sulphide Resources beneath the currently reported Resources. The geometry of this mineralisation is unknown. There is very little deep drilling at Roseby with only 57 holes in the 35 km long field being deeper than 200m downhole.

Universal previously reported drill results at a 0.3% cut-off grade and the project has been optimised at a copper price of US$2/lb. The continued strength of the copper price, currently US$3.35/lb, supports the use of higher prices and permits lower cut-off grades to be used.

A similar impact can be seen at the Little Eva deposit where 4 separate intercepts can be considered as a single intercept; LER521: 172m at 0.72% copper and 0.12g/t gold.

While the immediate focus of the new company (post-merger) is to bring the Outokumpu copper project in Finland towards a decision to develop the mine next quarter, the strategy at Roseby is to re-evaluate the project to consider whether potential production can be expanded to 40,000tpa copper.

Over the next quarter a plan for re-optimising the Roseby Project in the new copper price paradigm will be developed. This will be complemented by a drilling programme to expand Resources and convert inferred to indicated Resources. The immediate focus will be to materially increase the project NPV, to increase scale and to reduce capital costs per tonne of proposed copper production.

For the complete Universal Resources announcement including tables and figures, please click the link below: