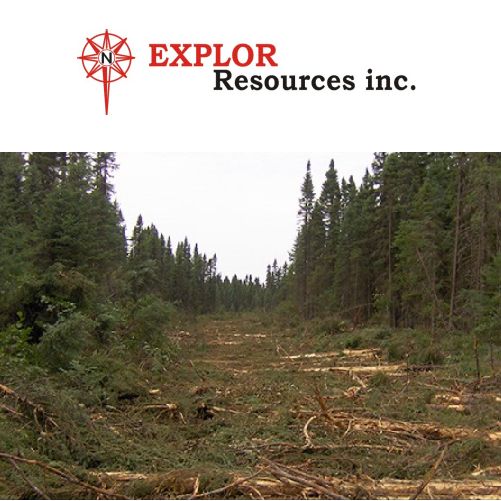 Rouyn-Noranda, May 3, 2017 AEST (ABN Newswire) - Over the past number of weeks, I have mentioned proposed drilling programs at a number of the Company's properties. Last week I focused on the PG-101, and the very clear GOLD potential throughout this property block. I have also mentioned other properties under consideration moving forward, including the Chester Copper deposit in New Brunswick; the Duparquet (East Bay) property in Quebec; the Ogden property adjacent to the Company's Timmins Porcupine West GOLD deposit, as well as the Montrose property, north of Timmins. The long-awaited geophysics report at East Bay should be in Dupont's hands by the end of this week, or the beginning of the next. I believe we will see drilling commence on that property, prior to programs initiated on the others mentioned.

The discussions I've had with CD, & others, suggest we have some exceptional anomalies on the property block. From the map shown in the Explor website: (see link below), its obvious the area is a hotbed of exploration & production, surrounded by mid tier producers IAMGOLD, OSISKO, & XSTRATA. The property is substantial, consisting of 135 claims, covering 2,632 hectares of land. Historical channel samples completed by Lacana Mining Corporation in 1982 include 0.81oz GOLD/ton over 5 feet, 0.165oz GOLD/ton over 6 feet and 0.10oz GOLD/ton over 10 feet.

The East Bay property is located approximately 0.5km (600yards) directly to the west of the former Consolidated Beattie and Donchester GOLD Mines which produced over 1.0 million oz of GOLD between 1933-1956. The GOLD mineralization appears to be located in a splay off the prolific Porcupine Destor Fault Zone. Given the size & scope of the block, it's no wonder that the geophysics took so long to complete.

The Kidd results involve three holes drilled earlier this year. I've lost count of the number of promises the lab has made, to analyze, and report their assays on the core samples to Dupont. Chris is as frustrated as the rest of us I'm sure. Apparently, the latest lab promise is for late this week. Once Chris receives the results, a NR will immediately follow. Having intersected Exhalite on a number of occasions immediately adjacent to the north of the Glencore Kidd VMS mine, I'm still guardedly optomistic a VMS deposit on Explor's property continues as a probability in my mind.

It's past May 1, which means CD should have received Teck's report due. Left him a message, but I've had no discussion with him on this topic at this time. Apparently, Dupont is meeting with investors in Toronto, & Montreal this week. My current understanding is that having spent over $3 million to date on exploration at the TPW, Teck is in compliance with the financial terms of the Earn-In Agreement. However, a corporate report detailing work, operations, intentions moving forward & cost breakdowns, must be presented by them to Dupont by midnight, April 30th as well. Personally, I would be tickled pink if they failed to do so, as Explor would then have grounds to vitiate the Agreement. A number of other miners have expressed a keen interest in the TPW. It's also abundantly possible Explor would pick up where they left off before the Teck association, and put a real & credible effort into expanding the horizons of the GOLD deposit. Once I hear for sure, I'll issue a further report.