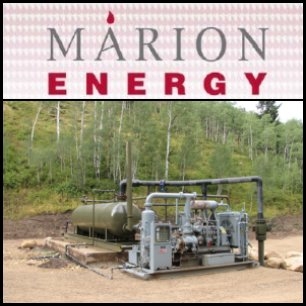 PINK:MAEJF) is pleased to announce that following short term injectivity testing operations, it has received an aquifer exemption from the Utah Oil and Gas Board. The exemption is the first stage in the approval process to convert Clear Creek ASD 3-17, and if required, the ASD 6-17 wells into salt water disposal wells. Application has now been made to the Utah Department of Oil and Gas and Minerals for the issue of the appropriate permits to complete the well conversion process.

Given that the Clear Creek field is expected to be a significant water producer in its early productive operations, the ability to dispose of the water into the Company's own disposal wells, together with the existing infrastructure of water pipelines in the area and the close proximity of the disposal wells to the Company's gas wells, is expected to result in a material positive impact on the economics of production as it will provide significant cost savings. There will be no external transport or disposal fees incurred. Water disposal costs are now expected to be of the order of a few cents per barrel.

The Company currently expects that, following granting of the permit, it will use the ASD 3-17 as its primary disposal well. It is planned that these disposal wells will also eventually be put onto gas production once all the other wells in the field have been put onto production.

With the critical first step of the regulatory approval process completed, the permit for the disposal into the ASD 3-17 and ASD 6-17 wells is currently lodged with the authorities and progressing through the relevant approval process. A decision on the granting of the permit is currently expected in May 2010. Further updates will be released as they become available.