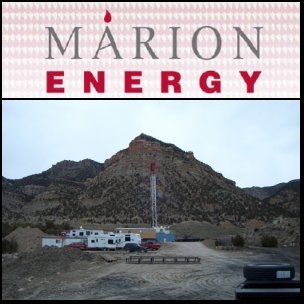 PINK:MAEJF) is pleased to advise that it is expanding its Clear Creek, Utah, USA well workover and remediation program by targeting an additional five existing wells. The expanded program will take to thirteen the number of wells targeted for production by the end of 2010.

Marion has a 100% Working Interest in all these wells. The Company's management recently completed a further comprehensive review of the 17 Clear Creek wells drilled in the 1950-1960 period and which have been shut in since the mid 1970's. As a result management has concluded that at least five of these old wells may be able to be returned to production at only minimal cost. Costs to put these wells online consist of surface facility work and installation of artificial lift.

Management now intends to undertake a comprehensive work program on the wells and assessment of results to verify its belief that a significant amount of gas can be recovered from these old wells.

The wells to be worked over and remediated are the Utah State Minerals #1, Utah Fuels #1, #2, #3, and Utah Fuels #10. These wells collectively produced over 56 BCF of gas during a 21 year period, with initial average daily production rates of between 3 MMSCFD and 6 MMSCFD. These average daily production rates at the time were seasonally limited by end user demand and are not necessarily indicative of the maximum flow rates that the wells may have been capable of.

As part of the review associated with the initial eight target wells drilled and completed in more recent times by Marion, the Company requested Schlumberger (

NYSE:SLB), one of the world's pre-eminent oilfield services companies, to reprocess a Schlumberger FMI log from the Oman 2-20 well. The analysis showed a high density of open fractures throughout the Ferron interval.

The analysis verifies management's hypothesis that complex fracturing existed which helped to give rise to the prolific production rates of the 1950's. As a result of this verification and the fact that the wells were taken off production in the 1970's at flow rates which would be economic in the current price environment, management believes pursuit of the operations on these five wells to be of considerable merit.

The water disposal process now being pursued at Clear Creek (refer ASX Announcement of 11 May 2010) is expected to facilitate the workover and remediation operations of the thirteen target wells and, importantly, to also greatly improve the production economics of the old original wells should production be successfully restarted.