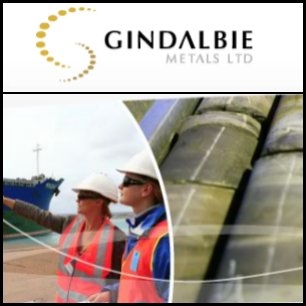 Gindalbie Metals Limited (ASX:GBG) is seeking to raise a minimum of A$175 million to assist with the development of the Karara iron ore project in Western Australia.
Sydney, May 13, 2010 AEST (ABN Newswire) - The Australian shares opened higher on Thursday after the better-than-expected economic data in the euro zone inspired the US and Europe markets. Asian stocks in early trade were broadly up on the good offshore leads. Australia's S&P/ASX200 index climbed over 0.9 per cent at opening.

In economic news On Thursday, the focus will be the unemployment rate for April released by Australian Bureau of Statistics.

ASX:GBG) is seeking to raise a minimum of A$175 million to assist with the development of the Karara iron ore project in Western Australia. The capital raising will comprise a A$111.8 million conditional share placement via an institutional bookbuild and a conditional placement to its Karara joint venture partner and largest shareholder, China's AnSteel, to raise between A$63.2 million and A$74.6 million. There will also be a share purchase plan for eligible shareholders in Australia and New Zealand. AnSteel will remain a 36.12 per cent stake in Gindalbie while the AnSteel placement will be adjusted depending on amount raised in the share purchase plan. The proceeds of the capital raising will be used to fund Gindalbie's share of the revised construction cost estimate for the Karara project and to meet the project's working capital requirements.

ASX:SGT) reported that its net profit for the fourth quarter ended March 31 rose to S$1.02 billion, driven by strong performance across the group. During the quarter it recognised a S$327 million exceptional foreign exchange gain due to the strengthening of the Australian Dollar. For the full year, net profit increased 13 per cent to S$3.9 billion, in line with guidance. SingTel expects the economies in Singapore, Australia and the region to improve in 2010. The company says it is focused on enhancing and deepening customer relationships, enhancing customer experience and extending its services into media/ICT in Singapore and Australia.

ASX:EAU) has agreed to acquire all of the outstanding common shares of Brazauro Resources Corporation (

CVE:BZO) for total consideration comprising common shares of Eldorado having a value of about C$122.4 million. As part of the transaction, Eldorado has agreed to fund with C$10 million a new exploration company that will contain certain exploration properties currently owned by Brazauro. Under the arrangement, each Brazauro share will be exchanged for 0.0675 Eldorado shares, which together with the contemplated spinoff of the new company would value Brazauro at C$1.33 a share.