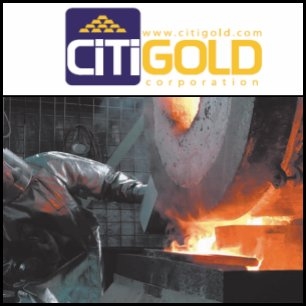 Citigold Corporation Limited (ASX:CTO) advises that it has signed a binding Letter of Intent (LOI) with China's Henan Jinqu Gold Company Limited.
Sydney, May 20, 2010 AEST (ABN Newswire) - The Australian shares opened slightly higher this morning despite Wall Street and European markets posted losses overnight. The local market was supported as investors were hunting for bargains following a series of significant falls in recent sessions. Yesterday the Australian market closed at its nine- month low after the global markets fell on Germany's ban on naked short selling.

On the economics front today, the Australian Bureau of Statistics releases average weekly earnings data for February. The Melbourne Institute publishes its survey of consumer inflationary expectations for May.

ASX:CTO) advises that it has signed a binding Letter of Intent (LOI) with China's Henan Jinqu Gold Company Limited. The LOI is the next stage agreement following the Memorandum of Understanding (MOU) signed on March 4. This signing builds upon the MOU and follows on from the recent inspection of Citigold's Charters Towers operations, Queensland, by Jinqu's technical team. The stated intent of Jinqu and Citigold is that the LOI will be replaced by a comprehensive joint venture agreement to be concluded and signed within three months. The agreement is subject to due diligence by both parties and Foreign Investment Review Board approval.

ASX:AOE) said the Chinese Ministry of Land and Resources has formally registered the reserves certification for a section in the Liulin Coal Seam Gas (CSG) block. Fortune Liulin Gas Co, 35 per cent owned by Arrow Energy International (AEI), completed an application for MOLAR reserves certification in late 2009. The MOLAR certificate states that the Gas in Place in these seams in this section of the Liulin block is 196 PJ of which 100 PJ are categorised as economically recoverable. The AEI net share of the certified Gas-in-Place is therefore 34 PJ. AEI has options to increase its stake in Fortune Liulin to 75 per cent over time, which would result in AEI owning a greater net share of the certified Gas-in-Place.

ASX:BCI) said today that the company and its joint venture partner, the Fortescue Metals Group (

ASX:FMG) are continuing the development of the Nullagine Iron Ore Joint Venture in the East Pilbara of Western Australia. The statement comes after Fortescue announced yesterday that it will shelf two of three expansion projects in Western Australia due to the Australian government's Resources Super Profit Tax, and consider selling these projects to foreign firms. BC Iron will commence mining at Nullagine later this year, and it remains on track for its stated target of first ore on ship during December 2010.