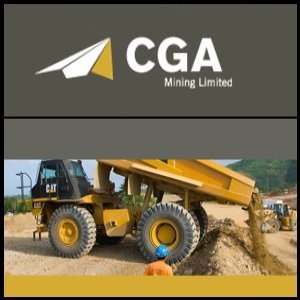 CGA Mining Limited (ASX:CGX) (TSE:CGA) said it plans to spin off the company's interest in a gold project in Nigeria and a copper project in Zambia by an IPO of Ratel Gold Limited.
Sydney, June 2, 2010 AEST (ABN Newswire) - The Australian shares Wednesday continued to decline in early trade, led by financial stocks. Overnight Wall Street closed lower in a choppy trade as investors wobbled on Europe's debt issues despite the upbeat US economic data. Meanwhile, declines energy sector weighed on US stocks, after the US government said it was starting civil and criminal investigations on the Gulf of Mexico oil spill.

Yesterday the local market shrugged of the news that the Reserve Bank of Australia decided to keep the interest rate unchanged and fell 0.4 per cent at the close.

On the economics front today, the Australian Bureau of Statistics releases national accounts figures, including gross domestic product for the March quarter.

TSE:CGA) said it plans to spin off the company's interest in a gold project in Nigeria and a copper project in Zambia by way of the initial public offering (IPO) of Ratel Gold Limited, which is currently a wholly owned subsidiary of CGA. The dual listed mineral explorer will retain a minimum 20 per cent in Ratel. The IPO will involve the issue of up to 70 million new common shares in Ratel at an issue price of C$0.20 per share. The net proceeds raised will be used to fund exploration and feasibility activities on the two projects in Africa, plus general administrative and working capital purposes.

ASX:IAG) Wednesday said it expects to report a full year insurance margin guidance of 6.0-7.0 per cent, after a one-off pre-tax charge of about A$365 million in the year ending June 30. This is largely due to a rise in bodily injury claims in its U.K. motor insurance business. It also expects an insurance margin guidance of 10.5-12.5 per cent for fiscal year 2011, reflecting confidence in the continued underlying improvement in its overall business. The insurer's underlying gross written premium growth is expected to be between three and five per cent in 2010/11.

ASX:PAX) said it has made good progress in advancing its geothermal interests in Indonesia. Panax has entered into a Memorandum of Understanding (MOU) with Bakrie Power regarding joint exploration and development of geothermal resources and reserves across the whole of Indonesia. Under the MOU, Panax will be the operator with a 51 per cent interest, with the remaining equity being held by Bakrie Power.