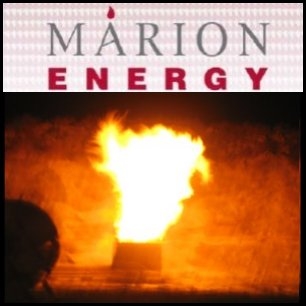 PINK:MAEJF) is pleased to advise that it has now finalised the development of its work program and production targets for the 2010 calendar year.

The program has been developed in conjunction with the completion of a comprehensive review of all operations and will focus on delivering significant revenue and cash flow through the cost efficient recommencement of production from 13 wells in the Clear Creek field.

Management is now focussed on implementing the program which will be undertaken in a highly disciplined, measured and cost effective manner aimed to result in consistent production from the wells in line with the potential encountered during drilling and testing.

The following provides an overview of the work program, technical background and operational strategy.

Operations management has developed and commenced the implementation of a planned 13 well remediation/workover program, with preliminary work commenced on the Oman 2-20 well in December 2009 and more recently on the RR 11-17 and RR 13-17 wells.

Since the commencement of work on these three wells, management has conducted reviews of the behaviour of the wells and carefully assessed the best process to bring the Clear Creek Wells back into production.

As a result a program has been designed that will result in each well undergoing operations in a four stage process, as outlined below. As some wells will not require all four stages of operations, the timing of the operations will vary from well to well.

A critical step in the successful execution of the remediation strategy has been to establish a low cost operation for the disposal of produced water from the wells. In the early stages of operations significant amounts of naturally occurring water will be produced by the wells.

This has the effect of both restricting the scope of operations that could be undertaken quickly and resulting in significant costs being incurred for the external disposal of the water.

Management therefore elected to slow operations while it applied to the relevant authorities of the State of Utah for a permit to use up to two of Marion's own wells as water disposal wells.

As announced to the ASX on 11 May, 2010 the first part of the permit has been granted and the full permit is expected to be issued in the coming weeks. This will facilitate the implementation and economic viability of the remediation program resulting in major cost savings. Full ramp up of the program can proceed quickly once the final permits are granted.

In the course of completing initial diagnostic analysis of the Clear Creek wells, a search of Schlumberger's open hole log data base uncovered an FMI log for the Oman 2-20 well which was reprocessed by Schlumberger for Marion in February (Schlumberger is one of the world's leading oil field services companies). The FMI log identifies natural fractures in high resolution. Schlumberger technicians presented the results to Marion staff and reported that the Oman 2-20 has a great density of open fractures up and down the Ferron interval. This verifies Marion's new understanding of the complex fracturing previously assumed only from the prolific production data in the 1950's. It also gives the Company additional confidence to proceed with the four stage planned operations as outlined below.

The program will initially focus on bringing into production the Oman 2-20, RR 13-17, RR 11- 17 and RR 2-19 wells plus five historical wells. The planned rehabilitation operations, along with further optimisation programs as and when necessary, are ultimately expected to increase the production rates to targeted optimal rates of production.

As part of the overall operational review, the Company's management completed a further comprehensive review of all the Clear Creek wells drilled in the 1950-1960 period and which have been shut in since the mid 1970's. As a result management believes up to five of the historic Clear Creek wells may be able to be returned to production with only minimal intervention costs.

The results from reprocessing of the Schlumberger well log and the fact that the wells were taken off production in the 1970's at flow rates which would be economic in the current price environment, lead management to believe pursuit of the operations on these five wells to be of considerable merit. The ability to dispose of water produced by wells effectively and efficiently as outlined above will also enhance the economics of production from these wells.

Management now intends to undertake a comprehensive work program and assessment of the results generated to verify its belief that a significant amount of gas is yet to be recovered from these old wells.

The wells to be worked over are the Utah State Minerals #1, Utah Fuels #1, #2, #3, and Utah Fuels #10. These wells collectively produced over 56 billion cubic feet ("Bcf") of gas during a 21 year period, with initial average daily production rates of between 3 million cubic feet of gas per day ("mmcf/day") and 6 mmcf/day. Production rates at the time were seasonally limited by end user demand and may not necessarily be indicative of the maximum level at which the wells were capable of producing.

The expanded program will take to 13 the number of wells targeted for production by the end of 2010.

Water production is used in other wells that are at Stage 2.

Stage 2: Natural fracture behaviour allows high volume flushing of water into the fractured Ferron rock around the wellbore even when production operations encounter restricted flow. The flushing operations use produced water, which is undamaging, in an effort to displace existing drilling and completion damage further away from the critical wellbore area. The wells are then put back on pump after approximately one week to assess any performance improvement.

Stage 3: Plugs are removed and casing perforated as needed in wells to open up the full Ferron interval to production. A critical stage here is the efficient disposal of produced water into approved injection wells. Marion's near term strategy, the permitting of 2 existing wells, and a long term strategy to drill a dedicated well for handling produced water in an approved manner without incurring expensive offsite disposal costs.

Stage 4: Diagnostic tests are run on rock layers in selected wells such as the RR 11-17 to determine performance of drained and undrained layers. Stimulations are designed and implemented to remove flow restrictions that have existed in new wells and that may not be removed by the flushing operations in Stage 2&3.

It is planned to schedule commencement of remediation operations on a new well approximately every 10 days. Not all wells will require all 4 stages of remediation so the timing of completion of operations will vary from well to well.

Marion expects to be able to continue with this efficient and low cost operating plan for all 13 wells in the Clear Creek field throughout the next six to nine months with the aim to remove all barriers to production and place the wells back into full production operations within this time frame. All wells are being targeted to produce in a range of 1 to 4 million cubic feet of gas per day.

Details of the target wells and current projected timing of operations are as follows:
Positive regional characteristics - implications for Clear Creek project

Marion's Clear Creek project is located in close proximity to the Drunkard's Wash field, one of the most prolific in the State of Utah with almost 1 trillion cubic feet ("Tcf") of gas produced since discovery.

The most prolific wells within the Drunkard's Wash CBM "coal bed methane" project are those wells that have very little coal but a high density of natural fractures in the Ferron Sandstone. Marion has noted similar natural fracturing in its Clear Creek Wells.

Water production from the natural fractured Ferron Sandstone in Drunkard's wash is not plugged or cemented off as has been the past practice in Clear Creek. Rather, the water is produced at as great a rate as possible to evacuate the water from the fractures and release the gas from the matrix into the fractures. These Drunkard's Wash Ferron analogies begin with 1000-3000 barrels of water per day and within months are producing 3-4 mmcf/day of gas and steadily declining water production.

Marion has the existing infrastructure to handle over 30,000 barrels of water per day with existing flowlines when approval has been received for disposal of produced water injection within the field. Historic Ferron production has been much more prolific within Clear Creek than even the best Drunkard's Wash wells providing confidence in the new production strategy with the low cost disposal to be in place within a few weeks.

For the complete Marion Energy announcement including Figures, please refer to the following link:
http://www.abnnewswire.net/media/en/docs/63006-ASX-MAE-493117.pdf