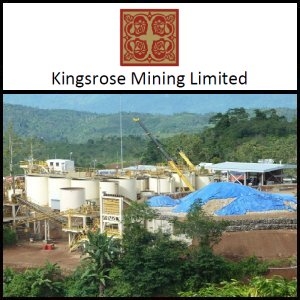 The Way Linggo Project Contract of Work, held by Kingsrose' 85% owned Indonesian subsidiary, PT Natarang Mining, covers an area of 10,540 hectares. It is located over a zone of structural complexity at the northern end of the Semangka Graben where pull-apart basins, fault splays and dilational jogs occur related to the Trans Sumatra Fault Zone. The Trans Sumatra Fault is a major dextral strike slip fault within the Sunda-Banda Volcanic Arc. All significant gold deposits known on the island of Sumatra are related to this structure.

Project development began in earnest in July 2009, following Kingsrose successfully raising A$20m in equity. Mine development has witnessed gold and silver grades in excess of those estimated by Snowden's in 2008 as part of its JORC compliant Mineral Resources report. Plant construction has been steady, albeit slower than originally anticipated with a doubling of throughput capacity and various other enhancements partly the reason for the extended construction period.

Steady state production of 45,000 ounces of gold per annum is budgeted at a production cash cost of US$150/oz after taking into account silver by-product credits and smelting and royalty costs.

Kingsrose, through PT Natarang Mining, continued to advance the Way Linggo Project towards production during the quarter.

A number of significant milestone were achieved during the quarter and the Company is set to transition to a gold producer in the ensuing quarter. Major milestones were:

- The grant of the forestry permit and final approval required to enable plant commissioning;

- The progression of plant construction such that at the time of writing, practical completion of construction was achieved and commissioning of the plant had commenced;

- Subsequent to the end of the quarter, commissioning on ore has commenced and a first pour of gold dore is expected in the first week of August 2010.

- Substantial advancement in mine development and in particular sub-level development was achieved setting the mine up for full production with nearly 12 months of mill feed fully developed.

- The internal shaft from the 1020mRL (2 level) to the 965mRL (3 Level) was completed and ore driving on the 3 level will commence in the next quarter. This will enable sufficient time to fully establish mine production fronts approximately 12 months ahead of requirement.

Metallurgical engineering studies resulted in a decision by Kingsrose being taken in 2009 to construct a conventional gold processing plant of nominal capacity of 140,000 tonnes per annum or approximately 400 tonnes per day (double the original design capacity).

Despite the onset of the monsoonal season, plant and associated infrastructure progressed to a point whereby the plant construction was close to achieving practical completion at the end of the quarter. Subsequent to the end of the quarter this was achieved and commissioning on ore has commenced and the major milestone of the first gold pour is expected to be achieved in the first week of August 2010.

The process plant will work through an expected staged build up to full capacity over the ensuing quarter as debottlenecking and practical re-jigging of circuit processes commences.

To enable the maximum recovery of the valuable silver co-product a Merrill Crowe zinc precipitation circuit has been installed. The onsite assay laboratory for analysis of mining grade control, mill and drilling samples was commissioned and is in full operation as is the tailings dam and power station.

Mining during the quarter was focused on sublevel development and the blocking out of stope panels in the A and B orebodies. Significantly, whilst previously considered to be separate epithermal veins, the identification and development of linking structures suggest a dilational jog-type structure exists with A orebody interconnecting with B orebody resulting in a much wider section of ore.

The bulk of the 1020 to 1065 levels has been fully developed to allow mine volume targets from stoping to be achieved with relative ease in the first year of processing whilst focus shifts to development of future ore on the 965mRL (3rd level).

The internal shaft from the hanging wall of the 2 Level (1020mRL) to the 3 level (965m RL) was completed and preparations for sill driving of the ore body at that level is in progress.

At the end quarter approximately 22,900 tonnes of high grade ore grading 19.5 g/t Gold and 224 g/t Silver had been stockpiled at the surface.

The program of regional prospecting, geochemical sampling and geological mapping of the near-mine areas of the Way Linggo Mine was accelerated during the quarter. This has resulted in the identification of a number of anomalies worthy of follow-up with two significant new prospect areas located to the north of the minesite.

These two new prospect areas are located approximately 2 km (Talang Kecap Prospect) and 4 km (Mitra Jaya Prospect) along strike of the Way Linggo Mine. Figure 3 (see link at the bottom of the release) shows the location of these prospects as well as other areas of exploration focus being targeted as defined by regional sediment geochemistry, airborne geophysics and structural analyses.

The Mitra Jaya prospect situated 2 km north of Talang Kecap is also characterised by abundant epithermal quartz vein float distributed in a number of neighboring streams over an area of interest of around 1 km in length. Numerous vein float samples have returned assay values in the range 1 to 4.3 g/t Gold with some higher grade samples up to a maximum of 33.5 g/t Gold and 200 g/t Silver.

Although in situ veins identified to date are narrow, the area is prospective because the veins do carry significant gold grades and are texturally indicative of the upper parts of an epithermal system. Prospect level exploration involving geochemical soil sampling and trenching is in progress to develop drill targets at these locations. It is expected that these targets will be drill tested during the next quarter.

Drilling activities commenced at the start of the quarter and approximately 4,900 metres of air core drilling were completed within historic tailings dams. The average hole depth was 15m and the deepest hole around 70m.

Nine historic tailings areas containing 25 identifiable tailings dams were drilled. The samples were collected and dispatched for preparation and analysis in late May. Due to the large size, moisture content and composition of the samples, it is expected it will be between 2 and 3 months before results are finalized however preliminary assays received thus far are encouraging. It is anticipated that resource modelling work will commence in September 2010.

Collection and preparation of detailed technical data and analysis of the mining history of the region continues. Metallurgical test-work is scheduled towards the end of this calendar year.

The local bureaucratic process slowed the Company's on-the-ground activities in the latter part of the quarter and efforts are currently being made by Company representatives in conjunction with key stakeholders to work through any technical and bureaucratic impediments.

The Project has received widespread support from a range of interests in the Sulcis-Iglesiente Province and in the Sardinian capital, Cagliari. The Project has the potential to generate significant employment and to stimulate economic activity in an economically depressed region that suffers from a high level of unemployment. The Project will use "world's best practices" and integration of modern day mineral processing and environmental management to extract the remaining recoverable metals and minerals thus providing the affected areas with a high standard of protection against past and future environmental degradation therefore improving land and ground-water quality.

The final Campaign (No.12) was stockpiled at the end of the quarter comprising an estimated 7,500 tonnes at 8g/t Gold. It is expected to yield approximately 940 ounces of gold for Kingsrose (worth A$1.2m at the current gold price).

PINK:RDRUY) to allow Kingsrose to exit Comet Vale on favourable terms, effective 31 May 2010. The agreement included Kingsrose receiving the following:

- Kingsrose continued to earn gold production, as per the (then) current arrangement, from October 2009 until 31 May 2010.

The Notes were issued in December 2007 to discharge liabilities totalling A$2.2m. The Notes bore interest at 6% per annum. The Company was able to negotiate repayment of the Notes via unsecured 3-month loans from the note holders bearing an interest rate of 6% per annum.

- Kingsrose closed the quarter with an AUD equivalent cash balance of A$7,885,306.

Kingsrose Mining Limited (ASX:KRM) is a specialist high grade, narrow vein underground gold miner. The company operates a gold mine in Indonesia and is evaluating a tailings deposit in Italy. The company listed on the Australian Stock Exchange in December 2007. 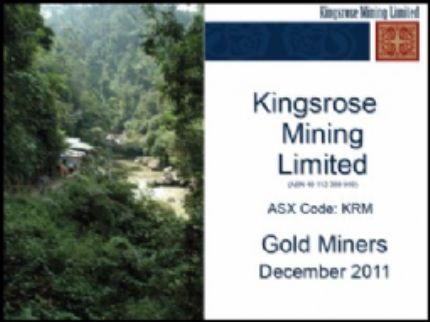