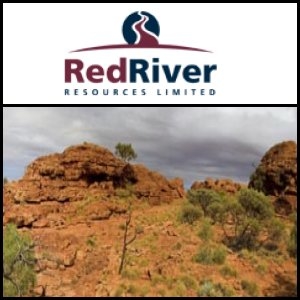 ASX:RVR) is pleased to announce its quarterly report for April - June 2010.

Activities carried out during the quarter were as follows:

ASX:IRM) ("Iron Mountain"), Red River Resources completed a program of stream sediment and soil geochemistry in the Miaree project area southwest of Karratha in the Pilbara region of Western Australia during September to December 2009. The location of the project area is shown in and the geochemical sampling resulted in the delineation of numerous spotty gold anomalies with individual sample values ranging up to 0.6 g/t. The sampling was undertaken subsequent to a metal detector gold rush which occurred further to the east in late 2008/early 2009 and which is reputed to have resulted in the discovery of over 1,000 ounces of gold. The area encompassing these recent discoveries occurs in a favourable geological setting at the western end of the Karratha Granodiorite: it contains numerous faults which are likely to have acted as strong fluid migrating pathways, and it also contains a number of associated electromagnetic (EM) anomalies detected by an airborne survey flown for Dragon Mining in 1994. Similar EM anomalies extend westwards into E47/1309 lying within the Miaree project area.

During the June quater of 2010 focus of exploration moved to the northeastern corner of E47/1309 where there is an abundance of vein quartz float as well as gossanous pisolite and where prospector activity has located fresh occurrence of gold nuggets. As this location lies within the Sholl Shear Zone, a major transpressional geological structure, the outcropping field signs may be indicative of a significant mineralised system. A recent round of pisolitic soil sampling has been carried out over the Napier Prospect and analytical results are expected to be received during the September 2010 quarter.

The Hooley Well nickel prospect contains a large IP chargeability anomaly, 3 km long, delineated during mid 2009. An Aboriginal Heritage Survey was carried out over proposed drilling sites and there are no significant sites there.

On 17th May 2010 Red River announced that it had entered into a Heads of Agreement (HOA) with Black Gold Resources Limited ("Black Gold"), an unlisted company, whereby it can earn a 50% interest in EPC 1181 and EPC 1921 (the Taabinga Project) for the expenditure of A$2 million.The tenements are situated at Kingaroy, 150 km northwest of Brisbane, Queensland. Independent consultants have calculated that EPC 1181 contains JORC-compliant indicated and inferred resources of 82.1 million tonnes of coal and there is further exploration potential in EPC 1181 lying to the north.

ASX:CXY) Kingaroy Underground Coal Gasification (UCG) project which initiated firing of a coal seam and successfully started producing syngas during March 2010. The current JORC resource in ground held by Cougar is 73 million tonnes and this resource is estimated to sustain a UCG project life of 30 years. The coal in the Cougar Energy project area is contained within three seams: the Kunioon, Swain and Googer seams and these three seams extend northwestwards into EPC 1181. Figure 3 shows the locations of coal drillholes in EPC 1181 and Figures 4 and 5 are cross-sections showing the distribution of these coal seams within the permit.(see link at the bottom)

Currently three companies are trialling UCG in Queensland where the government has placed a moratorium on further UCG evaluation programs until about 2011/12 when a report will be presented to cabinet with its findings on UCG technology. UCG potentially poses conflicting use of coal resources (in the case of underground coal mining) or of the methane contained within the coal seams (in the case of coal seam gas). However the coal seams within EPC 1181 are thermally immature for methane generation so they are not prospective for coal seam gas. Additionally, they have high ash content and they are deep, so not really prospective for underground coal mining. However, the seams within EPC 1181 appear to be eminently suitable for UCG in that they occur between 100-500 metres below surface and have thicknesses ranging up to 15 metres in places. The coal deposits around Kingaroy are suitable fot the application of this alternative technology and are unlikely to be declared off-limits to UCG exploitation beyond 2012/13.

FINANCIALS - APPENDIX 5B (see link at the bottom)

At 30th June 2010, the company had available funds of approximately A$1.7 million. The company's 5B highlights the quarter's cash activities and other relevant financial information.

For the complete Red River Resources announcement including figures and tables, please view the following link: