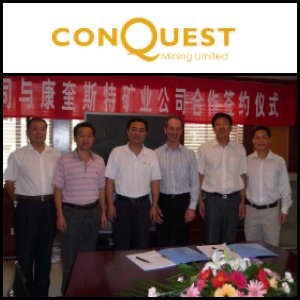 ASX:CQT) has entered into a long term concentrate offtake contract for the sale of gold-silver-copper concentrate from its V2 deposit at the Mt Carlton project in north Queensland. The agreement signed with Shandong Guoda Gold Company Limited, is a life-of-mine contract for the sale of 490,000 wmt of concentrate. The sales revenue under the contract for that quantity of concentrate is projected to be approximately A$1 billion. The V2 deposit is the largest single deposit at Mt Carlton and underpins the economics of the project. The offtake agreement over V2 is therefore the key to developing and financing the Mt Carlton project and discussions with project financiers will commence shortly.

ASX:HSK) has announced the signing of an agreement with Conquest Mining Limited (

ASX:CQT) for the sale of its 40% interest in the Pajingo Joint Venture for total consideration of A$37 million. Under the terms of the sale agreement, Conquest has agreed to acquire HSK Gold Australia Pty Ltd, the company's wholly-owned subsidiary which holds Heemskirk's interest in the Pajingo Joint Venture. Heemskirk Managing Director commented, "Following completion of the transaction, Heemskirk will continue to focus on increasing shareholder value by actively pursuing investments, particularly in gold and base metal assets whilst in parallel seeking to maximise the return from its existing operations."

ASX:IMU) today announced it has successfully completed a second trial of its Porcine Reproductive and Respiratory Syndrome (PRRS) vaccine, at a specialist pig trial facility in the USA. The results showed that Imugene's lead PRRS vaccine candidate was able to reduce the severity of the disease, when measured against parameters similar to those used by the US Department of Agriculture (USDA) in the US regulatory approval process for PRRS vaccines. The strong efficacy findings replicated the results achieved in the previous successful US trial conducted in 2008. The trial was also used to determine whether any variations of the vaccine could produce better trial results than the lead vaccine candidate used in the 2008 trial.

ASX:CWK) today made a joint presentation titled "Production of Liquid Fuels from Oaklands Coal Utilizing U-GAS(R) and MTG Technologies" at the Global XTL and IGCC Congress 2010 in Beijing, China. The Joint presentation summarized the feasibility work completed under the December 1, 2009, strategic alliance with Coalworks to investigate the utility of using Coalworks' coal deposit to build a coal gasification and liquefaction plant at Oaklands in New South Wales, Australia.