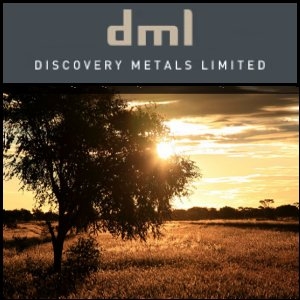 ASX:DML) has renewed seven Prospecting Licences for a further two years in northwest Botswana, which were originally granted in October 2005. The renewed tenements contain the Boseto Copper Project, where the majority of the company's exploration expenditure in Botswana has been incurred to date. The Company is committed to progressing exploration on all the renewed tenements as quickly as possible. Current exploration targets have been identified and a regional geochemical programme is underway to explore for additional targets.

ASX:DRA) announced the recommencement of exploration at the Kuusamo Gold Project in north-eastern Finland. An aggressive drilling campaign will be undertaken over the next twelve months totalling 20,000 metres. The Kuusamo Gold Project is located approximately 700 kilometres north of Helsinki. It comprises of a series of contiguous tenements that encompass five known gold occurrences, which have a combined total Inferred Mineral Resource inventory of 178,800 ounces grading 4.1 g/t gold.

ASX:NST) has received extremely high-grade drilling results from its Paulsens Gold Mine in Western Australia which highlight the potential for a significant resource upgrade and extension in the life of the project. The results, which are as high as 38.5g/t, have contributed to an increase in the Stage 1 Mine Plan from 55,000 ounces to 65,000 ounces. The first ore is expected to be intersected late in this month.