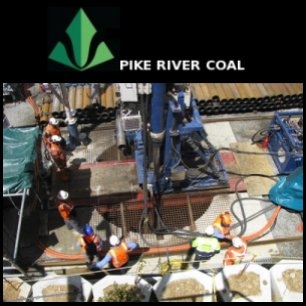 PINK:PKRRF) announces that it has concluded negotiations for an unsecured loan facility of up to $25 million with its largest shareholder New Zealand Oil & Gas (

PINK:NZEOY) to provide short-term working capital for the company.

The facility will attract certain commitment fees and a commercial interest rate and will be repayable on 15 December 2010.

Waivers of a potential 30 September 2010 covenant non-compliance have been received from the Bank of New Zealand and from NZOG. NZOG has, as part of its waiver, requested a one-year extension to the coal option agreement which was initially granted to NZOG in April 2010 as part of the package under which NZOG acquired its Pike convertible bonds. This extension will be put to shareholders for their consideration.

"This will allow the company to sustain underground mine development work, including acquisition of additional mining equipment which is critical to providing access for hydro-mining operations at a time while coal is being produced and stockpiled for shipment.

"Pike River has also begun work on securing a medium-term loan facility to supplant the abovementioned arrangement with NZOG and to carry the company through the remainder of the ramp-up of operations to steady-state coal production levels.

"Pike River produces a premium hard coking coal product for which there is strong international demand from coke and steel producers. When in full production the company should generate strong positive cashflows."

Mr Whittall says that commissioning of the hydro-mining equipment commenced on 20 September 2010 and that all equipment is installed and functioning well. A further update will be provided to investors once commissioning is completed.