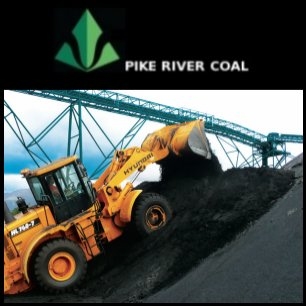 PINK:PKRRF) advises that it has developed a revised production forecast for FY 2010-2011 based on a comprehensive review of a number of key issues related to the mine's operation.

Chief Executive Peter Whittall says the revision is primarily the result of slower than expected progress in developing underground roadways which has impacted forecast production in the period to June 2011.

"Slower roadway development to date and lower forecast development in the next few months ahead of the introduction of the second ABM20 continuous mining machine and an upgrade to one of the current machines, will result in some interruptions to hydro production in the new year.

"This will result in a couple of months of previously scheduled high production in May and June slipping into the following financial year.

"In addition, the revision takes into account the expected ramp-up of the hydro-mining system which, after several weeks of experience, we are now more familiar with. The mine plan has also been revised to fall within the parameters of the surface environmental consents. This has resulted in re-orienting one of the extraction areas to increase coal recovery, but adds some delay in reaching it."

The new production forecast falls in the range of between 320,000 - 360,000 tonnes of saleable coal to June 2011 with the most likely expectation somewhere in the middle of this range".

Peter Whittall says he is very pleased with the way commissioning of the hydro monitor system has gone and that it continues to progress well.

"We expect to achieve full hydro system capacity in the June 2011 quarter at a production rate of 60,000 tonnes of saleable coal per month and, from that point, continue to ramp up the rate of hydro production to a steady state by the December 2011 quarter when we expect average monthly production volumes of 80,000 tonnes going forward" he says.

"The company is evaluating the impact of the changed production rates on the coal stockpile, sales expectations and timing and size of specific sales to its customers."

ASX:NZO) short-term facility due in December. Discussions are underway with various parties, with further announcements expected during November 2010, which will include details of the financial impact of these developments.

"This remains a great project, the scale of which is as we have always planned," says Mr Whittall.

"But it hasn't been without its problems, most recently machinery related. We remain confident, however, about our eventual annual production rates."

Following his recent appointment as CEO, Mr Whittall has now expanded the role of the company's Operations Manager Doug White to Mine General Manager to cover all mine site activities.

"With over 30 years experience in the mining industry, Doug will provide excellent leadership at the mine site," says Mr Whittall.