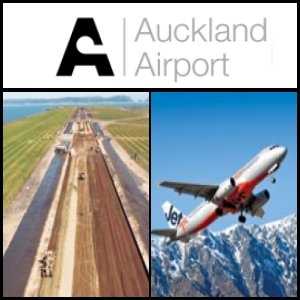 NZE:AIA) is gaining further momentum from its increased focus on key Asian growth markets, with China Airlines announcing that it will commence air-services to Taipei in January 2011, and Malaysia Airlines announcing an additional service to Kuala Lumpur starting in March 2011. These services are in addition to the new Jetstar Auckland to Singapore services starting in March 2011, and the additional Asian capacity from Auckland added over the last 6 months by other airlines including Air New Zealand (

SEO:003490) and the recent decision of Air Asia X to commence services to Christchurch.

ASX:CWK) said today that its wholly owned subsidiary, Coalworks (Vickery South) Pty Ltd (CVS), has received its Preliminary Feasibility Study (PFS) to develop the Vickery South Coal Mine, coal handling and preparation plant and mine infrastructure. According to the PFS, the mine project is expected to have a mine life of 18 years and produce an annual average of 1.41 million tonnes of semi soft coking coal and 0.28 Mt of export quality thermal coal, at full production.

ASX:SPI) has discovered a significant new zone of near-surface manganese mineralisation at its South Woodie Woodie Project in the East Pilbara region of Western Australia. The zone has been shown over an area approximately 220 metres long and 130 metres wide, with the mineralisation appearing to extend in an easterly direction. Survey is to commence shortly to define potential extensions to the mineralisation and follow-up drill targets. Further drill program is planned for early 2011.

ASX:CIL), already one of Australia's top tier corporate bookmakers, today released a Strategic Plan aimed at doubling its share of the bookmaking market to approximately 20% by FY15. The Strategic Plan is predicated on significantly increased brand marketing investment, a change in advertising spend and mix, and a step up in new product development in Australia. There will be a particular focus on new racing products, some of which are already in development. Centrebet's European operations will be focused on maximising investment program.