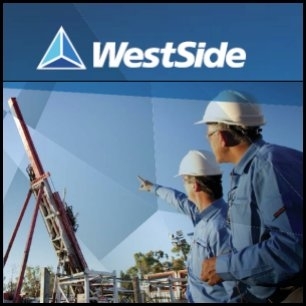 ASX:WCL) is pleased to release the Chairman Address to the 2010 Annual General Meeting.

While many companies became defensive and focused on conserving cash in response to the Global Financial Crisis, WestSide remained alert for attractively priced opportunities and was ready to act.

Just one month after the last AGM in November 2009, WestSide announced plans to acquire Anglo American's 51 per cent operating interest in the Dawson SeamGas CSG fields near Moura in Queensland's Bowen Basin. This acquisition enabled your Company to steal a march on many of our peers and accelerate the transformation from a coal seam gas (CSG) explorer into a gas producer.

Importantly, it also enabled us to team up with major Japanese trading house Mitsui (

NASDAQ:MITSY) and emerge as a significant participant in Australia's east coast energy market with certified reserves and sales under contract.

The timing really could not have been better either in light of recent developments - namely the Federal Government's decision to "green light" development of the proposed BG and Santos LNG projects and BG's subsequent Financial Investment Decision to proceed with its US$15 billion LNG project on Curtis Island.

While there is undoubtedly still some way to go, development of an export LNG industry in Queensland now seems assured with first shipments being targeted for 2014-15.

The Meridian acquisition has provided WestSide with an opportunity to access international LNG markets through Mitsui's global network and for the joint venture to consider supplying new domestic gas contracts from 2015-16 once our current supply contracts expire.

Domestic gas prices along Australia's east coast are destined to rise significantly once exposed to international competition from the LNG industry and WestSide is now well-placed to benefit.

Since assuming control of the renamed Meridian SeamGas CSG fields on 1 July 2010, WestSide has operated the field successfully and booked its first gas sales. Work to improve field efficiency is also underway while a first stage work program to lift production is well advanced.

WestSide believes there is potential to increase the joint venture's gross (un-risked) 2P reserves to over 500 petajoules (PJ), which would more than triple WestSide's net reserves position.

As announced this morning, work is now underway to drill exploration and future production wells further to the west and south west of existing production areas in PL94 targeting an upgrade in certified 2P reserves of more than 200 petajoules (or 100 PJ net to WestSide).

Meridian will therefore play a pivotal role in the achievement of WestSide's near term ambition to establish total net certified 2P reserves of 250 PJ and 3P reserves of 1,000 PJ.

Their participation in an institutional placement and preparedness to underwrite a 1:1 entitlement issue enabled WestSide to raise $64.4 million in fresh equity to fund the Meridian acquisition and execute our growth strategy.

As a result, WestSide's Board has also been considerably strengthened through the appointment of Infrastructure Capital Group's managing director John Clarke and New Hope's managing director Rob Neale, who have brought a wealth of experience and a pertinent mix of skills to the Company.

Rob's commercial, coal industry and M&A experience and John's infrastructure and financial market strengths have balanced and complemented those of the existing Directors to guide the Company through this exciting period of growth.

WestSide also added a significant longer term element to its growth strategy this year through the acquisition of ATP 974P and ATP 978P in the Galilee Basin's north-western region.

Importantly, we welcomed Mitsui's recent decision to expand its alliance with WestSide by farming in to 49 per cent to jointly explore these tenements encompassing 14,480km2 in a prospective area acknowledged as Queensland's last CSG frontier.

Discussions are continuing to further extend the alliance with Mitsui through the inclusion of our Pananui, Mount Saint Martin and Tilbrook projects in ATP 769P and ATP 688P in which QGC holds 50 per cent interests.

Mount Saint Martin was the focus of WestSide's exploration program during the year under review and we are looking forward to establishing a production pilot with a view to achieving an initial reserve certification there during coming months.

WestSide also has agreements with Indonesia's leading thermal coal producer, PT Bumi Resources, to jointly explore for CSG in Indonesia. However, confirming WestSide's tenure in the relevant areas of interest has been slow and the introduction of new participants has created operational and funding complexities which have prompted a review the Company's ongoing involvement.

The appointment of Dr Julie Beeby to the position of Chief Executive Officer in July 2010 further bolstered the mix of technical and commercial experience available to WestSide to lead the Company through its first year and beyond as a significant gas producer.

Significantly, Julie managed and developed part of what now comprises the Meridian SeamGas CSG fields operated by WestSide, having acted as Manager Seamgas from 1999 to 2002 at the Moura Mine then operated under joint venture by Peabody Mitsui.

Following completion of the meeting's formal business Julie will review operations over the past 12 months, update you on recent activities and brief you on our plans to advance the pipeline of opportunities we now have before us.

There will then be an opportunity for shareholders to ask further questions in relation to operations relating to the Company's projects.

On behalf of the Board, I would like to thank all members of the WestSide management team and associated people for their much-valued contribution and look forward to what promises to be another exciting year. Thank you for your continued support.